A look back at the Chrizy Golf Masters crazy golf competition in Manchester. 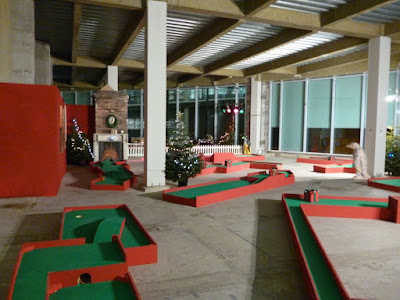 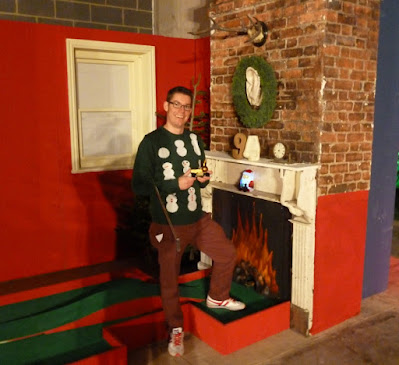 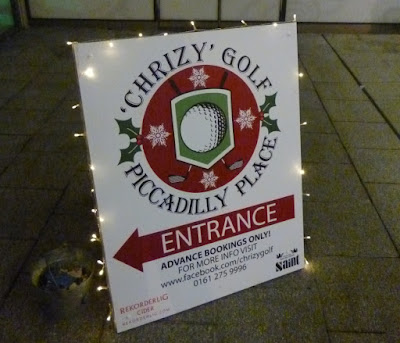 Back on the 30th November 2012 the first - and to date only - Chrizy Golf Masters minigolf tournament was held on a festive-themed pop-up crazy golf course at Piccadilly Place in Manchester. 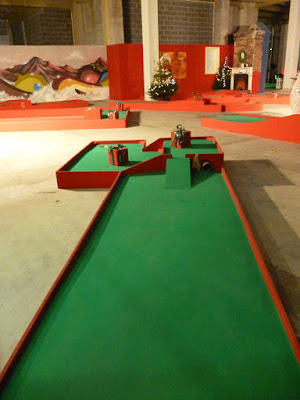 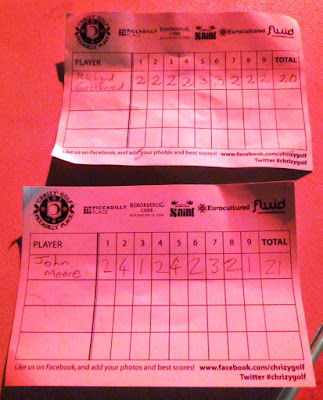 The Chrizy Golf course was the 313th played on our Crazy World of Minigolf Tour. 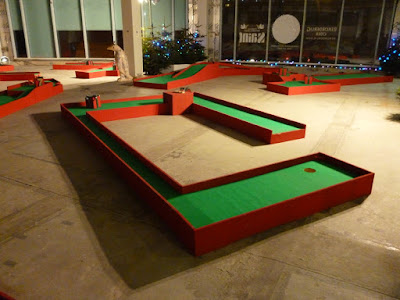 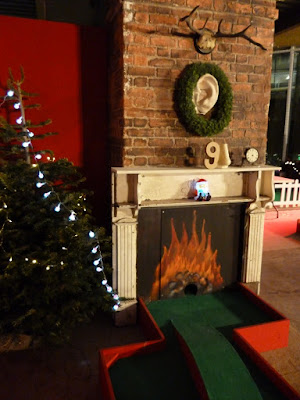 The Chrizy Golf course was gone once the 2012 festive season was over and the building remained empty, or used for other pop-ups, until the team at Junkyard Golf made it their home for another minigolf course. That one was there for a couple of years. They have since moved on and can be found at a permanent venue at First Street in the city.
Related blog posts:
- Christmas Crazy Golf
- Christmas
Posted by Richard Gottfried at Monday, November 30, 2020 No comments:

A look at the Kansas Fried Chicken shop in Mauldeth Road, Manchester.

Another week and another Grainger Games. 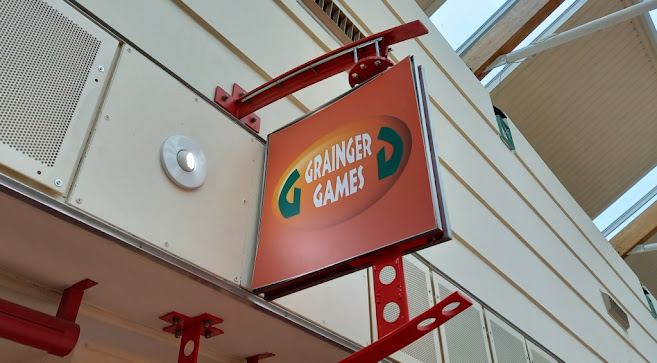 Last week we spotted the old Grainger Games store at Stretford Mall in Manchester. This weekend we stumbled upon the old shop at the Clarendon Square shopping centre in Hyde, Tameside.
Grainger Games was founded in 1996 and ceased operations on the 28th March 2018.
It was a brand with shops in the North of England and Scotland, so I only became a regular shopper there when I moved to Stockport back in 2016.

Make it a Blockbuster night 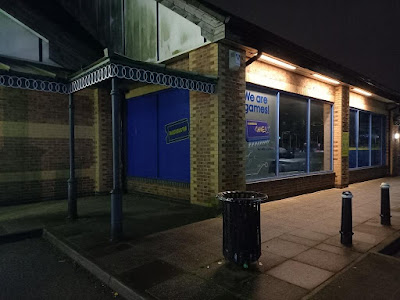 What are you watching tonight? Stranger Things for us.

A look ahead to the Dull Men's Club Calendar for 2021.

The new Dull Men's Club Calendar will be available shortly. 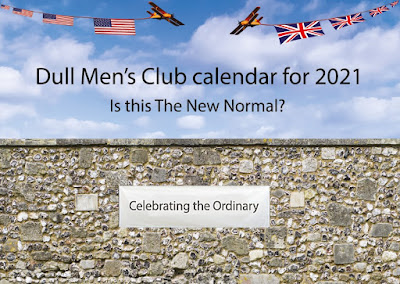 We featured in the club's 2017 calendar for our relentless mission to visit and document every miniature golf course in the UK.
You'll be able to find us somewhere in the 2021 edition too.
The Dull Men's Club celebrates the ordinary and the life-changing magic of simple, everyday, run-of-the-mill things.

Check out the Dull Men's Club website for more information.

Posted by Richard Gottfried at Friday, November 27, 2020 No comments:

A look at the 'Crazier Golf' course at Boom: Battle Bar in Cardiff, Wales. 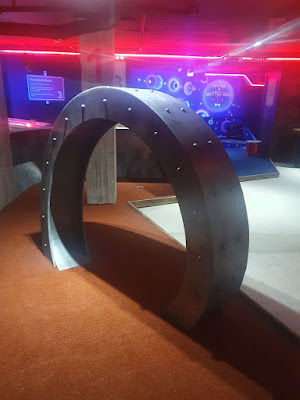 Many thanks to my friend and minigolf rival Simon Brown who sent me some photos from his visit to play the 'Crazier Golf' course at the new Boom: Battle Bar in Cardiff, Wales.
The course differs from 'normal' crazy or minigolf (whatever that may be) and some of the holes include time limits, while others don't require the use of a putter at all! 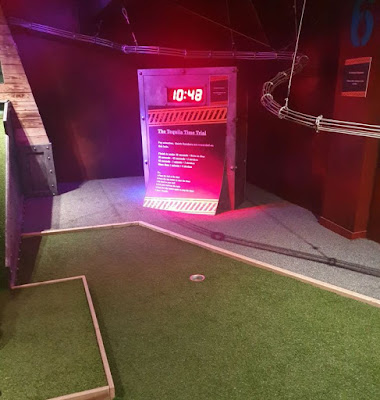 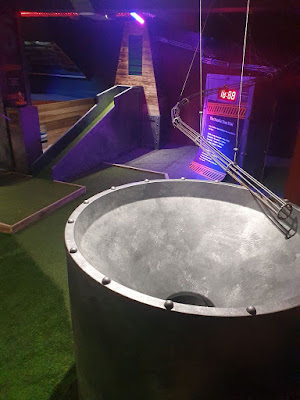 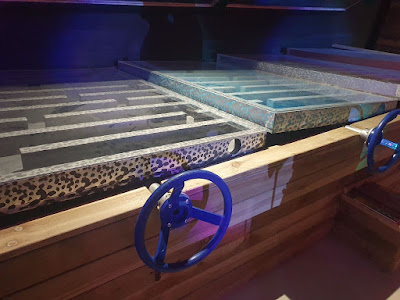 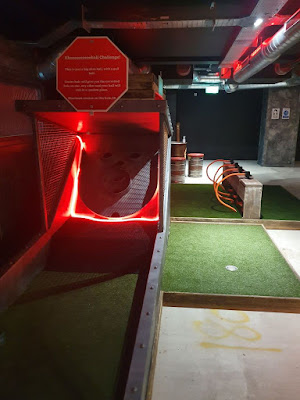 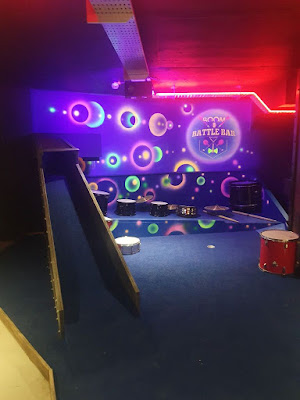 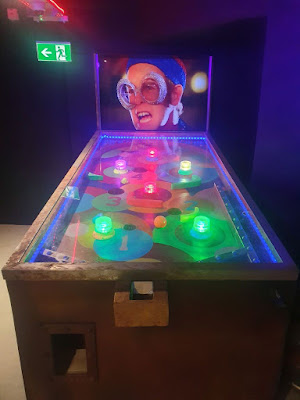 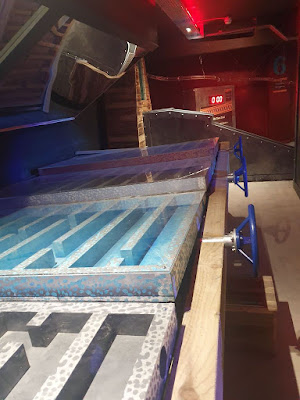 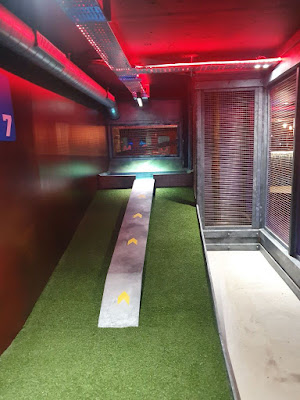 A new pop-up crazy golf course is opening in Hastings. 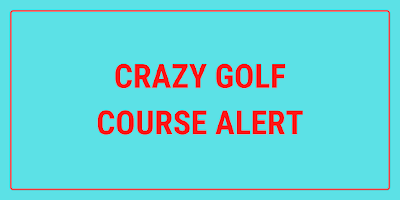 The seaside town of Hastings will be home to a new pop-up indoor crazy golf course next month.

Wonder Golf is planning to open in the old Hastings Observer newspaper offices in the town centre and will operate for a month between the 4th December 2020 and 3rd January 2021.

Each of the holes on the crazy golf course will pay tribute to the heritage and cultural events of the Hastings & St Leonards area.

Posted by Richard Gottfried at Thursday, November 26, 2020 No comments:

I now declare that the festive season may begin.

Posted by Richard Gottfried at Thursday, November 26, 2020 No comments:

Toys R Us at the Wyvern Retail Park in Derby

A look at a relic from a lost time.

It was marvellous to find the old Toys R Us store at Wyvern Retail Park in Derby.
Sadly Toys R Us ceased trading in the UK in April 2018.
Luckily there are still remnants of the brand on some retail parks in the UK.
I worked in the Gipsy Lane store in Luton, Bedfordshire back in the year 2000. I got the job shortly after arriving in the town to study at the university.
Thanks to Blast From The Past on Instagram for the heads-up about the Derby store still being there.
If you know of any other old Toys R Us shops do let me know.

Other former Toys R Us stores

Our travels have seen us spot the remnants of a number of old and defunct brands, including Woolworths in Stoke-on-Trent, Tandy in Hitchin, RadioShack in Lytham Saint Annes, Kwik Save in Barrow-in-Furness and Blockbuster Video stores in Fallowfield, Manchester, Colne, Lancashire, Prescot, Merseyside and Chester, Cheshire.
Posted by Richard Gottfried at Thursday, November 26, 2020 3 comments:

This is the Stretford Mall location. 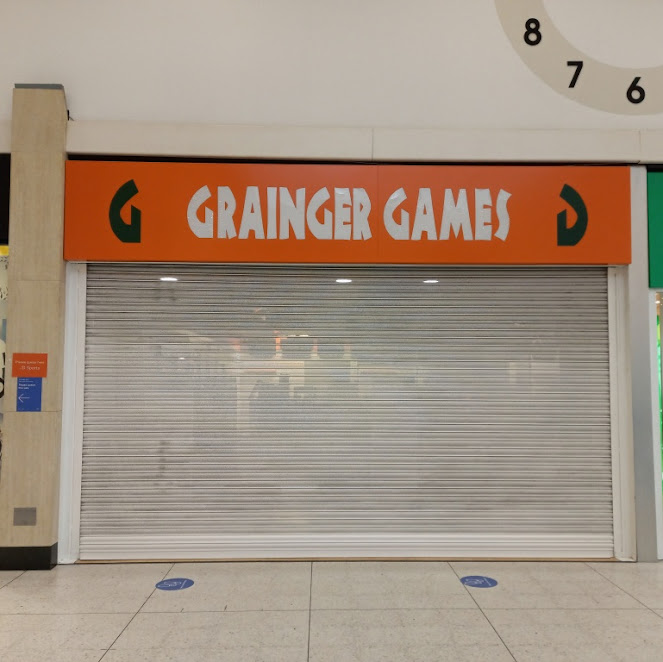 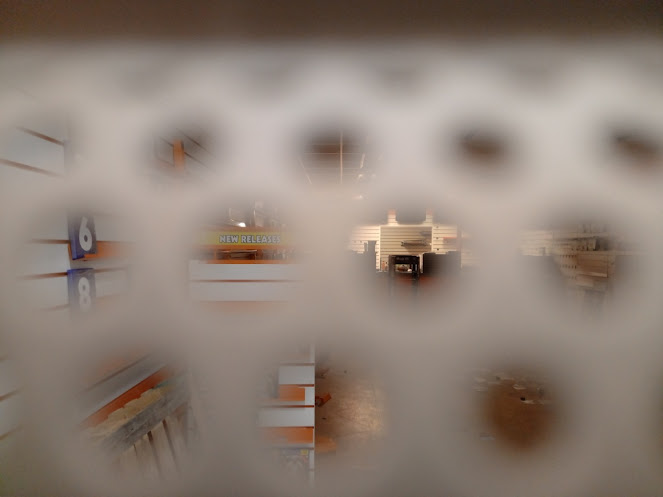 You won't find a PS5 there, but there's still a rack of UFC3 games for the XBOX ONE and PS4 in there. 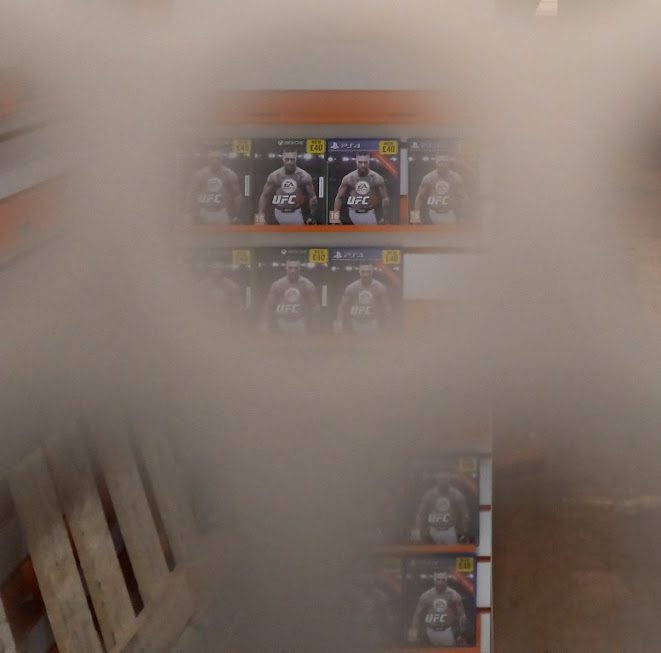 As a brand with shops in the North of England and Scotland I only became a regular shopper there when I moved to Stockport in 2016.
Posted by Richard Gottfried at Sunday, November 22, 2020 No comments:

Found underneath Stretford in Manchester. 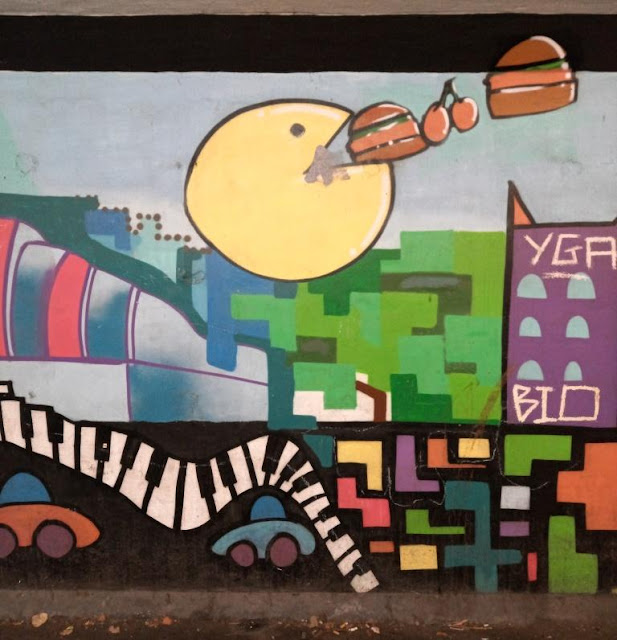 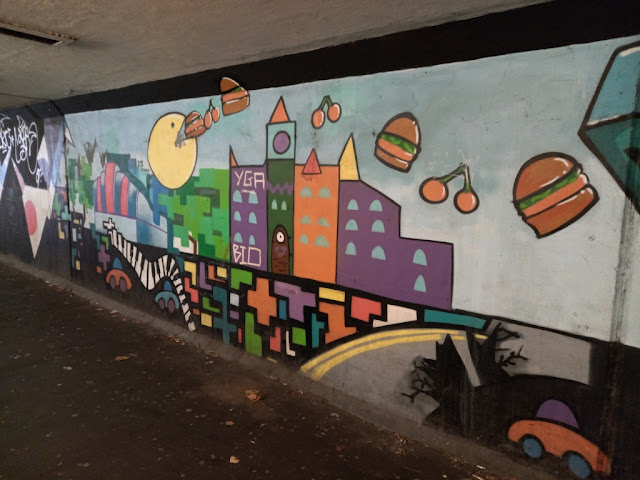 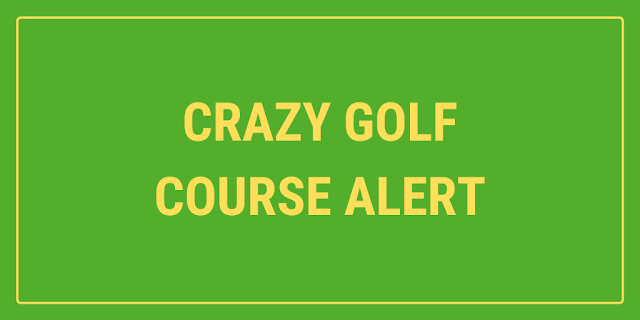 We look forward to playing the 9-hole crazy golf course on our Crazy World of Minigolf Tour in the future. We haven't been to Gourock on our previous travels in Scotland. It'll be nice to get back up there.
Gourock Park is home to a Putting Green and this will be redeveloped as part of the plans to transform the park.
Links:
- Gourock Park Bowling Club website
- Gourock Park Bowling Club on Facebook
Posted by Richard Gottfried at Thursday, November 19, 2020 No comments:

An old video store inside a Happy Shopper shop

I've spent a fair bit of 2020 reminiscing about 'the good old days' before the coronavirus pandemic. One of my areas of interest is in old retail brands - I am a marketer after all - and I have found remnants of a number of lost, dead and defunct brands. It's wonderful that these traces can still be found on the high street and at retail parks. If you know where to look.
I've found old Tandy and Toys R Us stores and signage - they are two brands I worked for in the 90s and the year 2000. I've also found old Woolworths, Big W, BHS, Kwik Save, Orange Mobile and RadioShack shops.
As I've been researching Blockbuster Video I've also noticed a number of old video shops. And last month we found a video shop still open and renting out VHS tapes!
One of the retro brands I remember clearly from growing up in the 80s and 90s was Happy Shopper. The colourful sign with the happy chappy face is a lovely throwback. Happy Shopper received a rebrand in 2000, but if you are lucky you can still find the original branding and signage on some shops.
While en route to an abandoned Toys R Us store in Preston I almost didn't believe my eyes as we drove past a closed Happy Shopper shop with the old signage still in place.
We actually found two Happy Shopper shops in Sheffield, one of which was still open. That store also had the original 1971 branding on the Covid-19 social distancing signage on the door! What a sight that was.
At the last Happy Shopper shop we found in Ilkeston, Derbyshire there was an extra bonus - it used to be a video shop too!
Video Box Office was the Business to Business part of ChoicesUK and launched in the UK in 1985 when the brand offered video rental services via third-party convenience stores. The following year ChoicesUK created a Business to Consumer operation with their own branded network of Choices Video stores.
While never as big as Blockbuster Video, Choices UK was a challenger to the market leader and the second largest chain of rental shops in the UK with 180 stores in the country. However, by 2007 the market for the rental of physical media was beginning to decline and other factors played a part in the brand going into administration. 59 ChoicesUK shops were taken over and rebranded as Blockbuster stores.

I wonder if there are any other remnants of Choices Video out there...?

Happy Shopper does still exist, as both convenience stores and own brand food & drink products. Many of the former Happy Shopper stores were rebranded as Premier shops. It has been part of the Booker Group since 1996. Booker itself is now owned by Tesco.
Posted by Richard Gottfried at Wednesday, November 18, 2020 No comments:

It's been a few years since our last Guinness World Record attempt. What shall we try for next?

We've just started watching Stranger Things on Netflix and it reminded me that we saw the remains of the Strangest Things attraction in Blackpool earlier this year.

The online reviews for the experience are quite something! 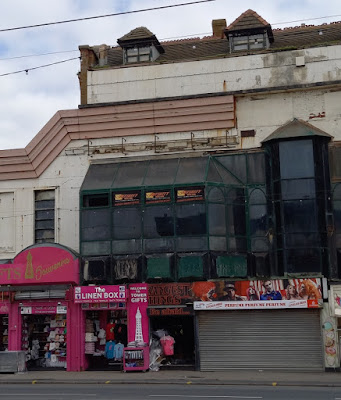 Posted by Richard Gottfried at Tuesday, November 17, 2020 No comments: