An old video store inside a Happy Shopper shop

I've spent a fair bit of 2020 reminiscing about 'the good old days' before the coronavirus pandemic. One of my areas of interest is in old retail brands - I am a marketer after all - and I have found remnants of a number of lost, dead and defunct brands. It's wonderful that these traces can still be found on the high street and at retail parks. If you know where to look.
I've found old Tandy and Toys R Us stores and signage - they are two brands I worked for in the 90s and the year 2000. I've also found old Woolworths, Big W, BHS, Kwik Save, Orange Mobile and RadioShack shops.
As I've been researching Blockbuster Video I've also noticed a number of old video shops. And last month we found a video shop still open and renting out VHS tapes!
One of the retro brands I remember clearly from growing up in the 80s and 90s was Happy Shopper. The colourful sign with the happy chappy face is a lovely throwback. Happy Shopper received a rebrand in 2000, but if you are lucky you can still find the original branding and signage on some shops.
While en route to an abandoned Toys R Us store in Preston I almost didn't believe my eyes as we drove past a closed Happy Shopper shop with the old signage still in place.
We actually found two Happy Shopper shops in Sheffield, one of which was still open. That store also had the original 1971 branding on the Covid-19 social distancing signage on the door! What a sight that was.
At the last Happy Shopper shop we found in Ilkeston, Derbyshire there was an extra bonus - it used to be a video shop too!
Video Box Office was the Business to Business part of ChoicesUK and launched in the UK in 1985 when the brand offered video rental services via third-party convenience stores. The following year ChoicesUK created a Business to Consumer operation with their own branded network of Choices Video stores.
While never as big as Blockbuster Video, Choices UK was a challenger to the market leader and the second largest chain of rental shops in the UK with 180 stores in the country. However, by 2007 the market for the rental of physical media was beginning to decline and other factors played a part in the brand going into administration. 59 ChoicesUK shops were taken over and rebranded as Blockbuster stores.

I wonder if there are any other remnants of Choices Video out there...?

Happy Shopper does still exist, as both convenience stores and own brand food & drink products. Many of the former Happy Shopper stores were rebranded as Premier shops. It has been part of the Booker Group since 1996. Booker itself is now owned by Tesco.
Posted by Richard Gottfried at Wednesday, November 18, 2020 No comments:

A visit to the Pavilion Gardens Miniature Railway in Buxton.

On our recent trip to Buxton we had a nice wander around the Pavilion Gardens. We didn't have any luck in finding the Crazy Golf and Putting courses we had heard were there, but we did find a miniature railway. 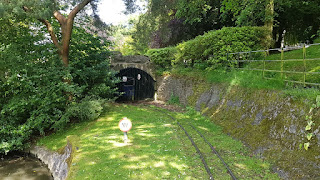 We've found quite a few miniature railways on our travels. There are a lot up here in the north west, including three in Stockport borough.

A visit to the Crazy Golf course at Eureka Park in Swadlincote, Derbyshire. 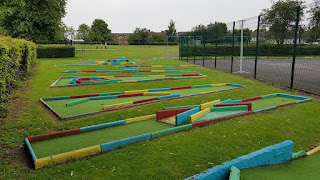 While en route to Leicester to compete in the final of the Caddyshackers Open tournament we made a stop in Swadlincote to have a look for the Crazy Golf course at Eureka Park. 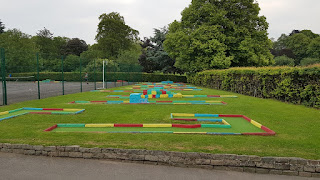 The Crazy Golf course at Eureka Park in Swadlincote was the 910th course we've visited on our Crazy World of Minigolf Tour.


However we couldn't find the Park Keeper to hire a putter and balls from so it was an unplayed course visit this time.

Related blog posts:
- Derbyshire
- What a weekend of minigolf!
- Crazy World of Minigolf Tour
Posted by Richard Gottfried at Thursday, June 27, 2019 No comments:

The new adults-only House of Holes indoor Crazy Golf course is opening in Derby this month.


The date has been set for the grand opening of Derby’s brand new adults-only indoor Crazy Golf course, with the House of Holes venue officially opening to the public on Saturday 16th March.

House of Holes has been created in the former Grand Theatre on Babington Lane in Derby. As well as the intriguing Crazy Golf course the venue will serve street food and cocktails accompanied by music from a resident DJ.


The House of Holes course will consist of 18 individually themed holes decorated with memorabilia, shop mannequins and other odd and interesting obstacles including a full-size plane – a nod to Rolls-Royce and Derby’s aerospace industry – roller boots and a large neon-lit guitar, which was discovered in the building’s basement and is believed to be over 30 years old.

The venue has, over the years, been home to a number of nightclubs called Ritzy’s, McClusky’s and Confetti’s.


In addition to the work on the course itself, House of Holes has employed local graffiti artists to decorate the walls of the building, while old copies of Viz cover the interior of the men’s toilets!


In the last couple of years indoor Crazy Golf has really taken off and is fast becoming a favourite choice for a fun night out, as well as a popular day time activity.

Bookings are now being taken via the House of Holes’ Facebook page, with an 18-hole round of Crazy Golf costing £10.

We're looking forward to a return visit to Derby and playing the course on our Crazy World of Minigolf Tour.

Meeting the Dull Men of Great Britain – The Crazy Golfers

Check out the new Lossul feature 'Meeting the Dull Men of Great Britain – The Crazy Golfers'.


We met travel and adventure writer Elliot Windmill at the Dull Men's Club's Delightfully Dull, Brilliantly Boring Evening held in Preston last May and in July we met again for an afternoon of Crazy Golf at Manor Park in Glossop, Derbyshire.


You can read Elliot's article Meeting the Dull Men of Great Britain – The Crazy Golfers on the Lossul website.

Work is underway on a new Crazy Golf course in Derby's Markeaton Park.

The old course has been removed and it's hoped that the new minigolf course will be open this Easter. 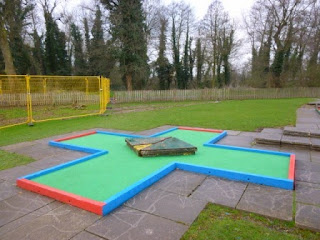 The old Crazy Golf course at Markeaton Park was the 550th miniature golf course visited on the Crazy World of Minigolf Tour back in March 2014. 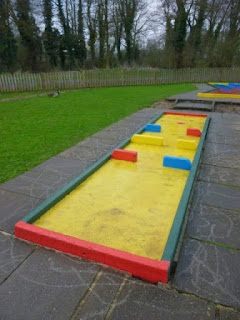 Unfortunately the 17-hole Crazy Golf course at the park's Mundy Play Centre wasn't open as it was an 'out of season' Thursday. 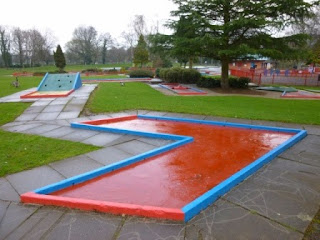 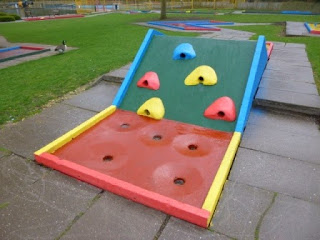 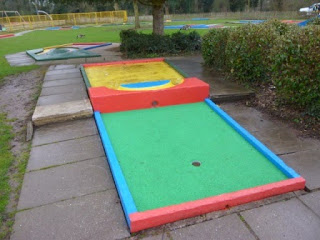 Check out the Derby Parks Facebook Page for more information on the new Crazy Golf course.