A look at the minigolf course in Lac de la Cavayère, France. 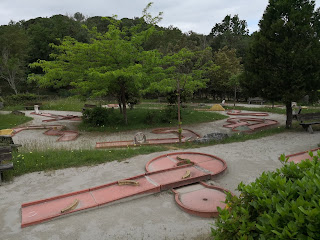 Charter member of the Crazy World of Minigolf Tour Christopher Gottfried has been off on his travels in continental Europe again and this time has come up trumps in finding a minigolf course at Lac de la Cavayère. 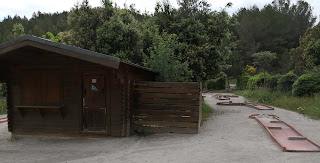 However, the course is only open in July and August! 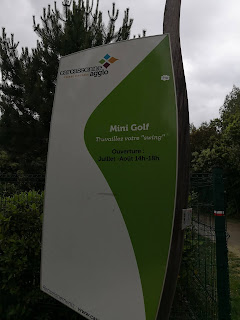 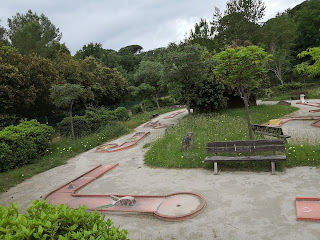 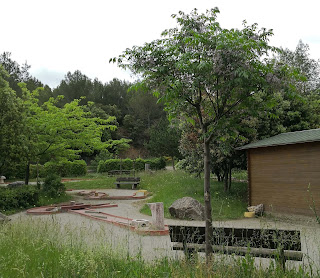 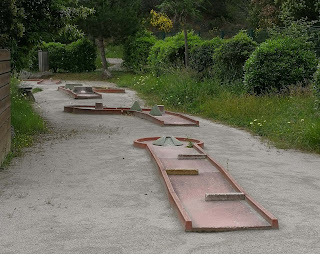 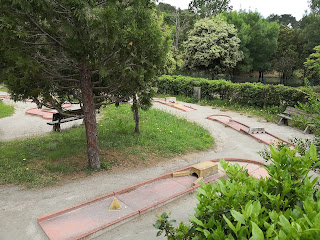 Christopher remarked that the place seems to combine my love of mini golf and park benches... one for every hole it seems!

A couple of days ago Christopher was in Sète and spotted Mini Golf listed on this map (C1), however it's been turned into a skatepark.


Earlier this month Christopher ticked off a few more minigolf course visits in Europe during a cycling trip in the Mosel Valley in Luxembourg and Germany.
Posted by Richard Gottfried at Tuesday, May 29, 2018 No comments:

A look at the minigolf grass Putting course at Beach Gardens in Swanage.


Many thanks to our friend and minigolf rival Tiger Pragnell for sending over these minigolf snaps from his recent trip to Swanage. While on holiday in the Dorset seaside resort he found a Putting Green that we missed on our tour of the South West coast in 2015! 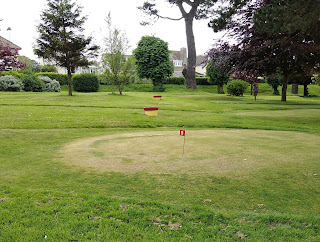 Tiger also swung by the Jurassic Adventure Golf course at the Santa-Fe Fun Park on the seafront. That particular course was the 600th visited on our Crazy World of Minigolf Tour.

Posted by Richard Gottfried at Saturday, May 26, 2018 No comments:

A look at the new Adventure Golf course at Dinton Pastures Country Park in Wokingham.


Many thanks to fellow minigolf adventurer Matt Dodd for sending over a snap from his visit to the new Adventure Golf at Dinton Pastures Country Park in Wokingham. 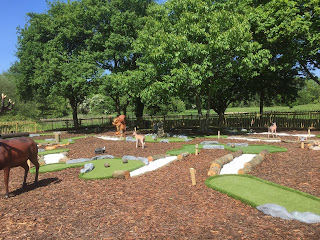 The 18-hole Dinton Adventure Golf layout opened earlier this month and Matt and his family were among the first players to have a round on the course.


Pac-Man was originally launched in Japan on the 22nd May 1980. His first appearance in the USA was on the 10th October.


I'm a big fan of Pac-Man and have seen him (and some of his clones) a fair bit on my travels.


Check out all the other Pac-Man related blog posts on the Ham & Egger Files. I think Credit Cruncher in Bristol is my favourite bootleg Pac-Man shop sign.
Posted by Richard Gottfried at Tuesday, May 22, 2018 No comments:

A look back at the Crazy Golf course at Hall Lane in Upminster.


My mate and minigolf rival Brad 'The Fist' Shepherd recently sent me over these pics of the Crazy Golf at Hall Lane in Upminster, Essex from his archive. They were taken a couple of years ago and before the 2017 refurbishment of the course. 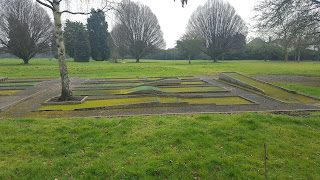 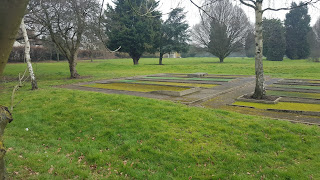 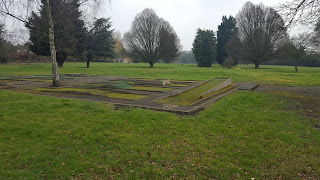 Check out what the Hall Lane Crazy Golf course looks like now on the Upminster & Cranham Residents' Association website. Very smart and clean.

The course was never open on my previous visits back in 2010 and 2012 on the Crazy World of Minigolf Tour.
Posted by Richard Gottfried at Monday, May 14, 2018 1 comment:

Taking a look at the track layout at Ipswich Model Engineering Society.


We recently found out there's a Miniature Railway in Ipswich. Emily grew up in the town and we visit often, but never knew about it! 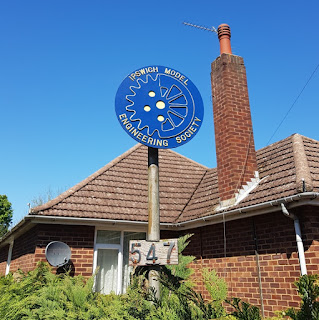 Last Sunday we popped along for a look. It was marvellous.


Hopefully we'll be able to coincide a future visit to the town with one of the Ipswich Model Engineering Society open days. 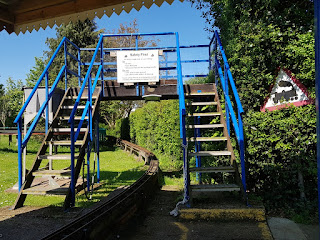 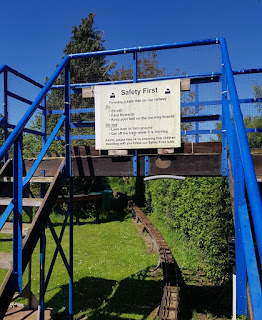 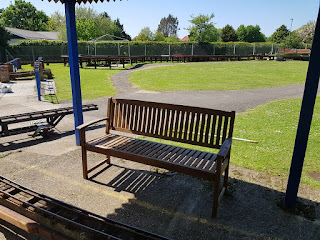 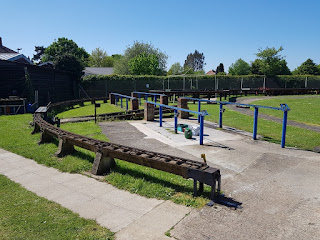 We spotted what looked like Pac-Man on a shop sign while driving along Nacton Road in Ipswich last weekend! We had to stop to get a snap of it.

Posted by Richard Gottfried at Sunday, May 13, 2018 No comments:

A look at the new Adventure Golf course at Sandown Park Golf Centre in Surrey.


Many thanks to my mate, minigolf rival and blogger Oliver 'The Machine' Florence for these snaps of the horse-themed Adventure Golf course at Sandown Park Golf Centre, taken during a round against Richard 'Michael Skaggs' Skeggs.


I'm looking forward to playing a round there on my Crazy World of Minigolf Tour.


The minigolf course at Sandown Park Golf Centre looks like it'd be a nice spot to play the biannual Surrey Invitational Tournament on.
Posted by Richard Gottfried at Sunday, May 13, 2018 No comments:

Today is a prime time to play a game of minigolf as it's National Miniature Golf Day.

We hope you have a superb time wherever you get to play the game.
Posted by Richard Gottfried at Saturday, May 12, 2018 No comments:

Next month is my tenth year gluten free. Any suggestions for how I can celebrate my Coeliacversary?


Having suffered from a range of symptoms for around ten years I finally received a positive diagnosis of Coeliac Disease following some 'interesting' tests and procedures in 2008. It came as a relief to finally have a name for the mysterious cause of my illnesses and ailments, but at the time I was only given a brief summary and told that I'd have to "cut down on bread and beer". It was only later when I met with my Gastroenterologist and a dietitian that I found out that the only treatment for people with Coeliac Disease is a strict, life-long gluten free diet.

May is Celiac Awareness Month in the USA.
Posted by Richard Gottfried at Friday, May 11, 2018 No comments:

Minigolf in the Mosel Valley, Germany

A selection of minigolf photos from a cycling trip in the Mosel Valley, Germany.


Charter Member of the Crazy World of Minigolf Tour Christopher Gottfried has just returned from a cycling trip in the Mosel Valley, Germany. While travelling along the route he managed to spot quite a few miniature golf courses.

He began his journey in Luxembourg where he found this Eternit Miniature Golf course on the Esplanade de la Moselle in Remich.


He followed that visit over the border in Germany when he went looking for the Minigolf course in Nittel.


Next up was a stop in Zeltingen-Rachtig where he found this Beton / Concrete style of Minigolf course.

In Traben-Trarbach he found this Eternit Miniature Golf layout.


While in Kobern-Gondorf he spotted an indoor Abenteuergolf course, as well as an Eternit Miniature Golf.

The last course he found on his mini-tour was in Bernkastel-Kues.


Check out the Crazy World of Minigolf Tour list for details of the 815 courses Emily and I have visited, along with the 20 Christopher has been too as well.

Knowing my interest in petanque and trains Christopher also sent over these snaps from the trip.

Posted by Richard Gottfried at Wednesday, May 09, 2018 No comments:

A look at Bermuda Fun Golf.


Many thanks to Adam Lueb for sending over these great photos from his visit to Bermuda. He was recently on holiday in the British Island territory and swung by one of the few miniature golf courses in the area, located as it is in the North Atlantic Ocean. 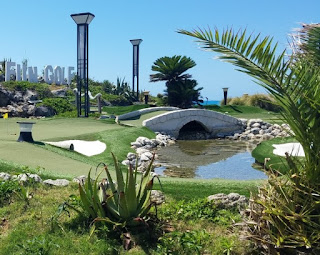 It's always brilliant to see snaps of different courses around the world. Hopefully one day we'll get to play the course on our Crazy World of Minigolf Tour, but in the meantime we can check out the course and views in the pics. 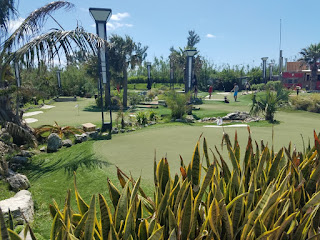 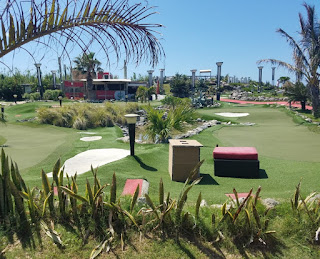 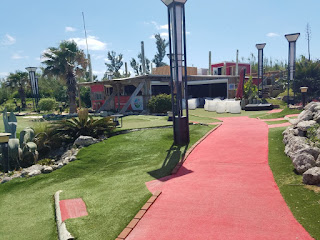 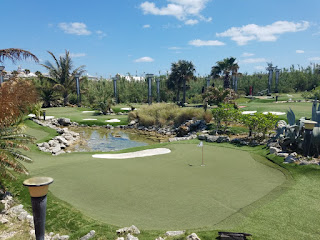 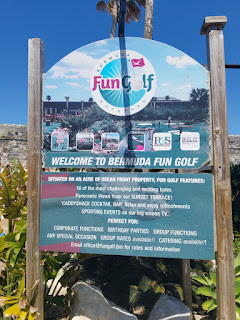 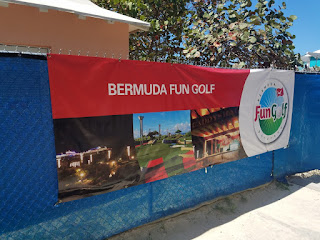 Last year Adam was in New Hampshire and sent me a photo of the indoor miniature golf course at Funspot New Hampshire - the 'The Largest Arcade in the World'!
Posted by Richard Gottfried at Tuesday, May 08, 2018 No comments: