While on holiday in Edinburgh Emily spotted this bit of bus advertising about the new Volcano Falls indoor Adventure Golf course that has opened at Fountain Park in Edinburgh.

We've played the Volcano Falls course at Xscape in Castleford on our Crazy World of Minigolf Tour.
Posted by Richard Gottfried at Saturday, June 30, 2018 No comments:

A new Junkyard Golf course is opening at The Light in Leeds.


The team at Junkyard Golf are taking their brand of indoor Crazy Golf to The Light in Leeds city centre.

We've played the Junkyard Golf courses in Manchester and London on our Crazy World of Minigolf Tour, but still need to visit the course in Oxford.

Many thanks to Leeds-based artist Jack Hurley for the tip-off about the course opening.
Posted by Richard Gottfried at Tuesday, June 26, 2018 No comments: 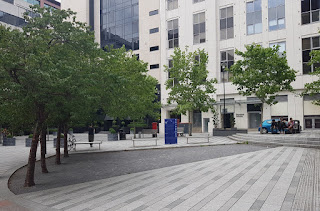 We love visiting Leeds and go there quite a lot. On our last trip there we found ourselves exploring some new bits of the city and while having a wander on Saturday we discovered a Petanque Piste in Bond Court, just off Wine Street! 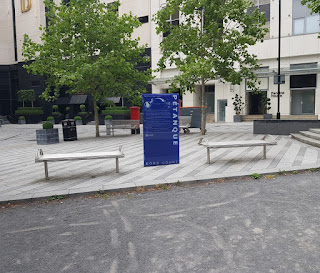 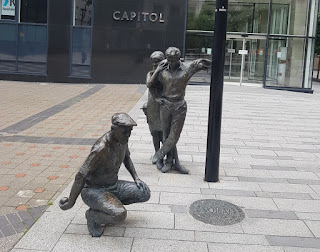 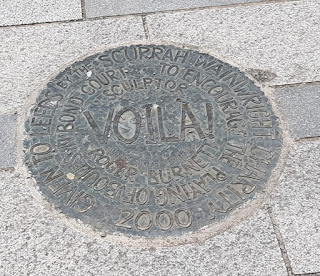 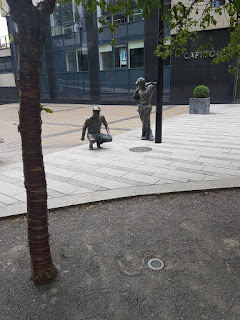 We enjoy a game of Petanque / Boules and play at the Woodstock Petanque Club in Edgeley, Stockport.


We'll have to take our boules with us on our next trip to Leeds.

On Sunday 24th June we swung by the 822nd and 823rd courses on our Crazy World of Minigolf Tour as we visited the new Jungle Rumble Adventure Golf centre in Leeds. 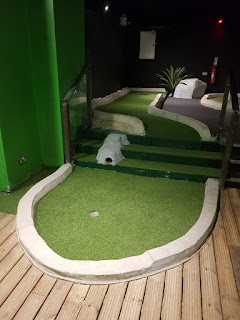 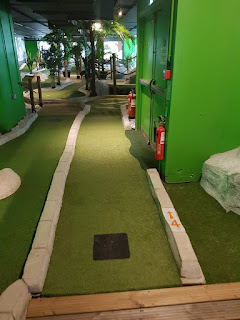 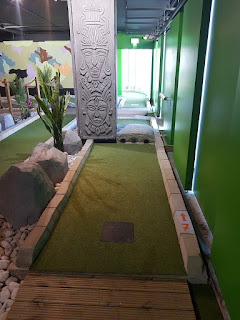 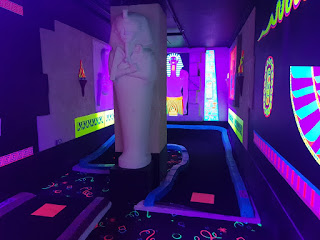 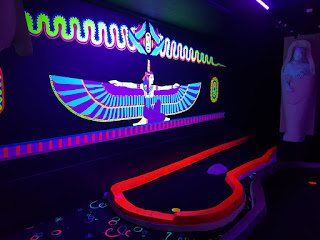 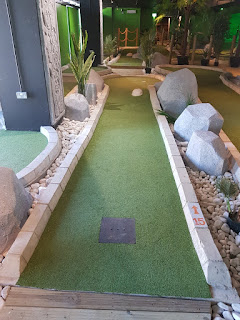 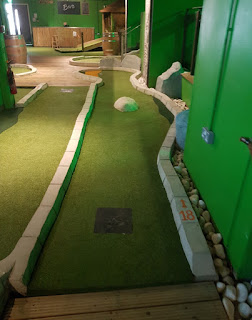 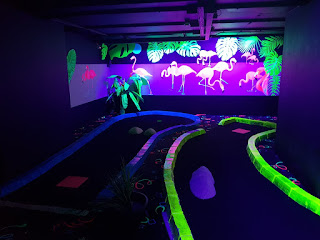 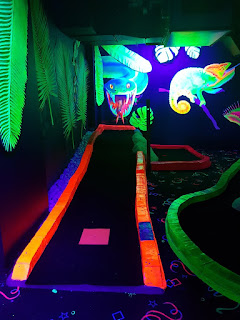 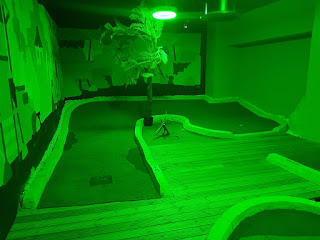 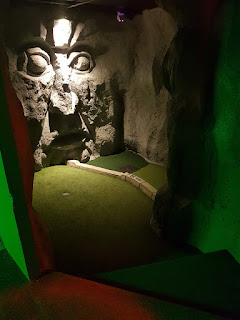 Today marks the 64th anniversary of the first Putt-Putt course, set-up by Don Clayton in Fayetteville, North Carolina, USA back in 1954.


To mark the occasion I've spoken to a number of my fellow miniature golf enthusiasts and bloggers and they've shared photos of some of their favourite Putt-Putt courses.

Putt-Putt is the only patented game of miniature golf and began in Fayetteville, North Carolina in 1954. In the 1960's Putt-Putt franchises began opening outside of the US, in locations such as the one on the postcard shown below, as well as Australia and Japan. You can read the Putt-Putt story on the Putt-Putt Fun Centres website.


On the competitive side of the game, Putt-Putt tournaments have been played since 1959. You can read about the history of the PPA and APA on the Professional Putters Association website.


Unfortunately the closest Emily and I have got to playing a Putt-Putt course is a postcard, some game tokens, a jigsaw puzzle and a photo one of my family took while in South Africa!

There used to be Putt-Putt brand minigolf courses in the UK, but they're long gone.

Between 1958 and 2000 there were a number of newsletters and magazines produced and the online archive is a mine of information. My favourite Putt-Putt World cover is definitely that of the Summer 1982 edition (volume 24, number 3)! 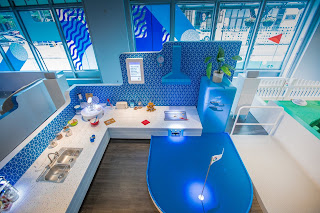 The Google Home Mini Golf course is currently touring the US. I hope it comes to the UK at some point too. Check out the video of the course.

The course has been to New York and is currently in Chicago (until 17th June) before it moves on to Los Angeles (30th June to 5th July) and Atlanta (26th - 29th July).

Check out the Google Home Mini Golf website for more info.
Posted by Richard Gottfried at Sunday, June 17, 2018 No comments:

Marc Chapman has won his first World Crazy Golf Championship title. The championships took place at Hastings Adventure Golf on the 9th and 10th June, with the largest number of competitors in the field since 2005.

This is the ninth time the 32-year old from Canterbury, Kent has entered the tournament and said he was thrilled to win the title. Marc said “It feels amazing to finally become the World Crazy Golf Champion! It’s been a great personal ambition of mine to win this event and I have been close to it a few times before. I’ve only played in a few events in the last five years, which makes this win even more amazing to believe!”

Playing along side the seasoned crazy golf professionals was a separate novice category with a dedicated prize fund of £1,500.

Russell said “It was a really fun day. The atmosphere at the course was fantastic and I am so pleased to have won the amateur title.”

Simon Tompkins of Hastings Adventure Golf, said “Congratulations to all our winners and a huge well done to everyone for taking part and making this a thoroughly enjoyable event.”

There were several other runner-up prizes. In total eight novices went home with prize money. The World Crazy Golf Championships tournament has been held at Hastings Adventure Golf since 2003.

You can see the full results of the competition online.

Check out the Hastings Adventure Golf website for more information, opening times and prices.
Posted by Richard Gottfried at Sunday, June 17, 2018 No comments:

A look at Swingers Crazy Golf in the West End of London.


Many thanks to Leland Carlson from the Dull Men's Club for sending me a snap of the A-board outside Swingers Crazy Golf that he spotted while having a wander round London's West End.

On my last trip to London last year I played at the 'original' permanent Swingers course near The Gherkin. It's a superb venue.

Emily walked past the new Swingers course while it was under construction last November.

Back in September 2014 Emily and I played the Swingers pop-up course in Shoreditch.
Posted by Richard Gottfried at Sunday, June 17, 2018 No comments:


The pop-up miniature golf course is part of a summer of fun and players can pick up a putter for a FREE round on Level 7 of the Churchill Square car park in Brighton.


Sounds great to me.

I hope some of my friends down in Brighton get along for a game - and nab me a scorecard and some snaps.

The course is open now and is on the roof until the 15th July. Check out the Churchill Square website for more information and opening times.

Posted by Richard Gottfried at Saturday, June 16, 2018 No comments:

Last month I was invited to be a speaker at the Dull Men's Club's 'Delightfully Dull, Brilliantly Boring Evening' at the University of Central Lancashire (UCLan) in Preston.

The Dull Men's Club is where dull men — and women who appreciate dull men — share experiences of enjoying everyday, mundane things, far from glitz and glam — "Celebrating the Ordinary".

The keynote speaker at the event was Dr Sandi Mann, aka ‘Dr Boredom’, author of The Science of Boredom: The Upside of Downtime, who spoke to the attendees about the benefits of boredom and her research on the Thirty Habits of Boring People.


Some highlights of my presentation covered my travels on the Crazy World of Minigolf Tour and how I, along with Emily, had - up to that point - visited 815 miniature golf courses since 2006.


Some of the intricacies of the sport were also discussed, with the show & tell element on minigolf balls being a particular highlight.


Somewhat controversially the 'Delightfully Dull, Brilliantly Boring Evening' was anything but. With a range of characters talking about their hobbies, pursuits and interests the group could've spent a long time sharing stories and ideas. Perhaps next time there'll be a longer Dull Men's Club symposium to spend more time talking about dull and boring matters.

Following the event I visited the 816th course on the Crazy World of Minigolf Tour when I swung by the indoor Crazy Golf course at Level Preston.

Other dull blog posts can be found within the archives of the Ham & Egger Files...
Posted by Richard Gottfried at Saturday, June 16, 2018 No comments:

A look at the Fantasia Adventure Golf course on Sea Road in Felixstowe.


One of our most visited courses is the Fantasia Adventure Golf course on Sea Road in Felixstowe. We've been going to the seaside town for many many years and always swing by for a look, and more often than not a game on the 9-hole course.

On our recent visit we noticed the felt and signage have recently been replaced and the layout was looking in very good condition. The weather was nice on our Bank Holiday weekend visit and on our return stroll along the prom in the early afternoon the course was proving very popular. 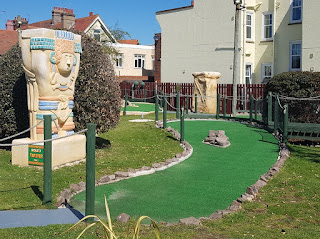 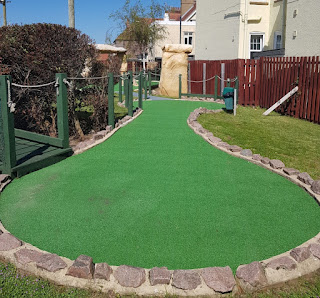 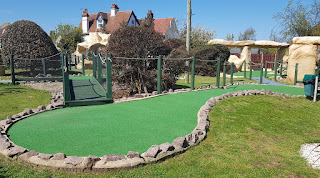 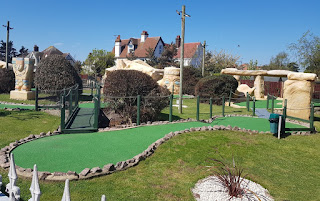 The last time we were there it was snowing!

You can see what it looked like before the new felt was laid in this blog post from 2016.

The course was the 7th visited on our Crazy World of Minigolf Tour. We've now been to 821 courses!