The photos our friends Matt and Helen Dodd took of the Arnold Palmer Crazy Golf course at the Haven Golden Sands Caravan Holiday Park in Mablethorpe, Lincolnshire reminded us of this snap our friends Sophia and Karl Moles took while on holiday at Haven's Caister-on-Sea Holiday Park in Great Yarmouth, Norfolk a few years ago.


It's great to see there are still Arnold Palmer Putting Courses dotted around the coast. They're definitely a great part of minigolf history.

Check out Haven's web pages for the Caister-on-Sea Holiday Park for more photos of the Crazy Golf course. They've got an interesting paint job on the classic windmill obstacle.

Our fellow minigolf adventurers Matt, Helen and Emily Dodd have been on a trip to the fine county of Lincolnshire and found plenty of courses to visit there. With the Dodd's staying at holiday parks they were able to play some courses that we never got to when we first visited Lincolnshire in 2011.


This Arnold Palmer Putting Course was played in the Haven Golden Sands Caravan Holiday Park in Mablethorpe. What a great discovery.

The hole below is a regular sight on Arnold Palmer Putting Courses and is very often a good opportunity for a hole-in-one. But this is the first time I've the hole with additional obstacles!


There is another Arnold Palmer Crazy Golf course in Mablethorpe. The Hooks Island Crazy Adventure Golf was a 13-hole layout (12-holes, plus lucky last hole) when we played it in 2011.

Lincolnshire is a real hotspot for minigolf. Skegness alone has 102-holes spread across nine seafront courses!

A revisit to Splash Point Mini Golf in Worthing


We were in Worthing on Saturday for my brother's birthday party, which also coincided with the annual Jet Wash Day down at the Splash Point Mini Golf course in Denton Gardens.


Course owners Anthony and Peter were part-way through their nine-hour shift to blast the dirt and grime from the 18-hole course ahead of the opening of the course for the 2016 season.


We also spotted a new feature on the course for this year. A bench.

In addition to Jet Wash Day Splash Point Mini Golf will be hosting two competitions this year. Check out details of other BIG 'days' in the minigolf calendar too.


While in town we were lucky enough to find a nice old postcard in a flea market just off the seafront. The card, published by Valentine & Sons Ltd and posted on the 7th July 1958, shows the Putting Green in Denton Park. Always a nice sight to see on old postcards.

You can also now sign-up to receive our miniature golf newsletter.
Posted by Richard Gottfried at Sunday, March 13, 2016 No comments:

Clown on a Moped

What better way to celebrate my brother Christopher's 30th birthday than with a surprise party in Worthing. And a Clown on a Moped!


Christopher is a charter member of the Crazy World of Minigolf Tour and on our travels we've putted through some clown's mouth obstacles.


Tommy Tickle appeared in the brilliant BBC documentary Clowns, it's well worth a watch.

Playing minigolf at the North Marine Putting Greens in Bridlington. 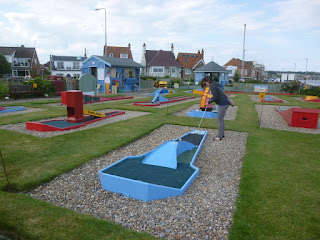 Last summer we finally made it to the seaside town of Bridlington. It'd been on our 'to visit' for quite some time. 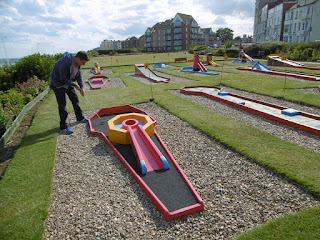 Unfortunately we only had a couple of hours there so couldn't fully explore - but we did visit the minigolf courses there. And played two of them. 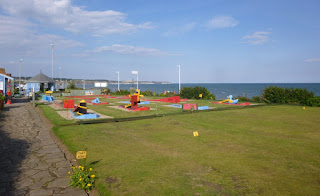 The first we played was at the North Marine Putting Greens, where you can find two grass Putting courses along with a very interesting Crazy Golf course. It's a mixture of holes - with some of them of the Swedish Felt variety, and others are Fibreglass. There are also some unique obstacles dotted around the course. 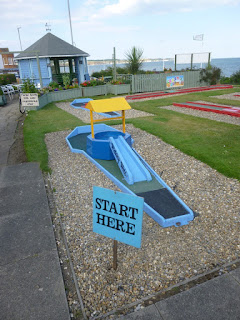 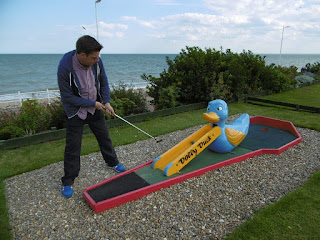 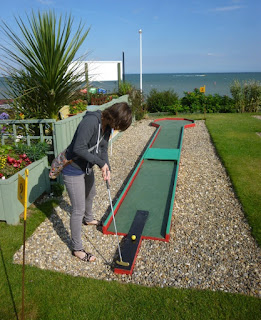 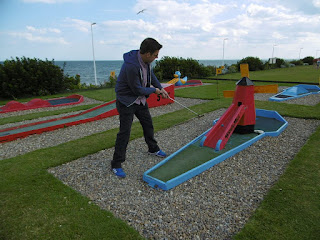 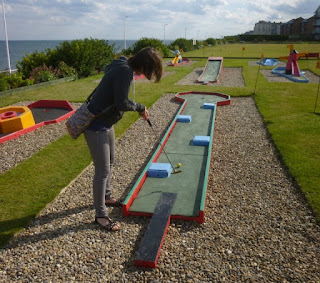 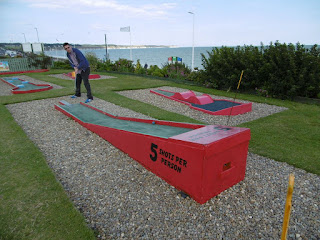 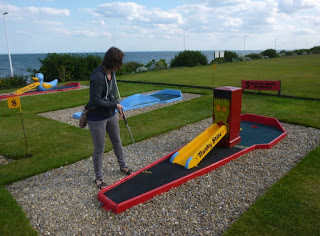 The Crazy Golf course at the North Marine Putting Greens became the 383rd course played on our Crazy World of Minigolf Tour and the 663th visited since September 2006.


The pair of Putting Greens looked nice too. We'll definitely give them a play when we're back in Bridlington.


While in Bridlington we also played the Treasure Island Adventure Golf course and had a look at the Crazy Golf course on the Foreshore Sands.

We're really looking forward to a return visit to Bridlington later this year as there's plenty to see and do there.

You can also now sign-up to receive our miniature golf newsletter.
Posted by Richard Gottfried at Monday, March 07, 2016 No comments:

We love visiting Whitby in North Yorkshire and on our last trip to the seaside town we revisited the Pleasure Island Amusement Arcade. We were quite surprised to find that the Adventure Golf course we had played on our previous trip had changed a lot!


In March 2014 the indoor Pirate Adventure Golf course had become the 327th course played on the Crazy World of Minigolf Tour. And with the significant changes it also became the 386th played!


As well as the addition of some new holes - notably the first - most of the course had actually been reversed. Crazy!


Check out the photos of the course as it was on our most recent play of the course in August 2015, and how it looked in March 2014.


The Shooting Shack there has been massively upgraded too.

You can also now sign-up to receive our miniature golf newsletter.
Posted by Richard Gottfried at Sunday, March 06, 2016 2 comments: