I've heard there are two upcoming open days at Luton Petanque Club where you can play for free. Boules will be provided. The open events are on:
- Saturday 2 May between 2 and 5pm
- Saturday 20 June

Petanque (or Boules as it's also known) is a great game. I've played a few ends with Alan and some of the other club members. Very good fun indeed.

Luton Petanque Club also play informal games every Tuesday afternoon at 1pm, Thursday at 7.30pm and Sundays at 11am. The club is based at Play Football on St Thomas Road, Stopsley, Luton. Check out the Luton Petanque Club website and Twitter for news and events.

Where there was once a Crazy Golf course

A look at the site of a one-day only art pop-up crazy golf course in Bedford.

May is Celiac Awareness Month.

Coeliac Disease (Celiac in the US and Canada) is a lifelong autoimmune disease caused by intolerance to gluten and the only treatment is to adhere to a strict lifelong gluten free diet.

Visit the Celiac Central website for more information on their work and Celiac Awareness Day.

The funniest thing I saw today

Why wouldn't a dog climb into a stack of shopping baskets!


Despite the best efforts of a member of staff the dog didn't fancy moving. It was happy as Larry in there.
Posted by Richard Gottfried at Tuesday, April 28, 2015 No comments:

May is National Golf Month

Organised by the British Golf Industry Association, National Golf Month will be taking place during May 2015.

The BGIA operates under the umbrella of the Federation of Sport and Play Associations (FSPA) and is the lead trade body representing UK manufacturers, wholesalers and distributors of golf products and services.

On our Crazy World of Minigolf Tour Emily and I have visited almost 600 miniature golf courses, some of which are located at 'regular' golf courses. Quite a few golf clubs and centres are building new Adventure Golf style layouts to encourage people to take up the BIG game.


In April 2012 we visited and played the world's first miniature golf course - The Himalayas - at the home of Golf, St Andrews.

As a fan of minigolf here's my blog post about the three 'days' for the great game.

- National Miniature Golf Day is on Saturday 9 May.

- Miniature Golf Day is ALWAYS on 21 September - this year it'll be on a Monday.

Since 2007 we've competed on the British Minigolf Association Tour and have played for the Great Britain Team at European and World Minigolf Sport Federation tournaments.

Check out the links below for more information on National Golf Month.


I enjoy snacking (especially when having a tipple), but finding suitable nibbles can often be a problem. That's why I was very pleased to find that Mr Scratchings Hot & Fiery Pork Crackling are gluten free. I found them on sale for 85p a bag in Trembling Madness in York.

Trembling Madness also has a section of gluten free beers. I bought a couple.

Nearing the landmark 600th minigolf course visit on our tour.


Back when we started travelling around the UK we wanted to visit as many seaside resorts and towns as we could - there are over 500 and we've been to 193 to date.


The first stop-off was Southsea to visit my little brother. While there we played the Treasure Island Adventure Golf course on the sea front and when we got home we found the excellent minigolf resource MiniatureGolfer.com that listed around 600 courses in the UK.

In total we've visited 596 miniature golf courses and played 360 of them, some of them many times over.


We've visited and played minigolf in each of the home nations, and so far 21 of the courses we've visited have been overseas - including locations in Finland, the USA, Austria, Australia, New Zealand, Sweden and Hong Kong.

In total, our travels have taken us to 458 different places in the UK, and that's not including the many many many little places we've stopped at briefly. And of the 193 seasides we've been to so far we've played, or visited, minigolf courses at 120 of them.

While at the York International Postcard Expo we found a bumper crop of postcards showing minigolf, crazy golf and putting courses from around the UK, and one from South Africa.

A postcard from the seaside resort of Herne Bay in Kent was an exciting and interesting find as it showed the town was once home to an 'Eternit' style of Miniature Golf course. A lovely piece of minigolf history.


It's often thought that these 'European standard' Miniature Golf courses, often known as 'Eternit', don't exist in this country. While many have become derelict over time there are examples still standing, though they have often been amended, with a variety of new obstacles added to the 'lanes'. I've got a few other examples in my postcard collection.

Herne Bay is still home to a Mini Golf course - it was the 78th course we played on our Crazy World of Minigolf Tour back in November 2008.

While shopping at Asda in Dunstable I noticed the new sausages and hot dogs in the Butcher's Selection range. I've been hunting for gluten free Frankfurters for ages so it was great to see.

Visit the Butcher's Selection section of the Asda website for more information on the range.

As today is National Pretzel Day here's a quick blog post about gluten free Pretzels I know of.


On Saturday 18 April 2015 I made the short journey up the line from Leagrave to Bedford for a day out in the Spring sunshine. One of my things to do in the town was a visit to the Putting Green at Russell Park on The Embankment.


I first played the course in July 2010 and revisited in August 2011. It's in a very nice location next to the River Ouse.

In my match-up against Biggleswade's number one miniature golfer Cat 'Fore' Patterson I won with a score of 50 to her 79 on the very tricky layout.

In only her second-ever game of minigolf (with her debut at the Pirates Cove Adventure Golf course in Great Yarmouth last year) Cat had some amazing consistency in her play. The rookie player managed to tie with me on the 8th hole when we both scored threes, and beat me with a three to my four on the last hole.

Looking back at my previous visits I have scored holes-in-one on the 14th, the 15th and on this occasion I hit an ace on the 5th hole. Always a very nice feeling on a grass Putting course.

A round for adults is priced at £2.90. For more information visit the Kiosk in the Park website.

Finding an old Official Holiday Guide, including Mini Golf Putting, for the town of Stonehaven, Kincardineshire.

While on a day out in Bedford I noticed an Antiques and Collectors fair going on at St Paul's Church so popped in to see if I could find any minigolf postcards or ephemera.

I was in luck as I found an interesting old Official Guide for visitors to the seaside town of Stonehaven.


Flicking through the guide I spotted a half page photo of the Putting and Bowling Greens on page 19.


On page 22 it states there were two putting courses in the town, and on page 35 the cost per round is given as 6d.

Stonehaven is on the north east coast of Scotland and lies 15 miles south of Aberdeen. Stonehaven is now a part of Aberdeenshire as Kincardinshire lost its administrative status in 1975. I couldn't find any other dates of publication of the old guide, but it is pre-decimal (before 1971). Very interesting to see the old phone numbers listed too - only four-digits long!

At a guess I would say the guide was produced in 1966. A recent event shown is the reopening of the old tolbooth by Her Majesty Queen Elizabeth the Queen Mother in 1963. There is also an advert on the inside back cover for Milne's Soft Drinks and Cordials - they are endorsed by Andy Ross, the 1965 winner of the Suffolk Point to Point.

The old guide is great find, with some nice minigolf and seaside holiday history.

Over the years Emily and I have enjoyed some very nice trips to Scotland on our travels. 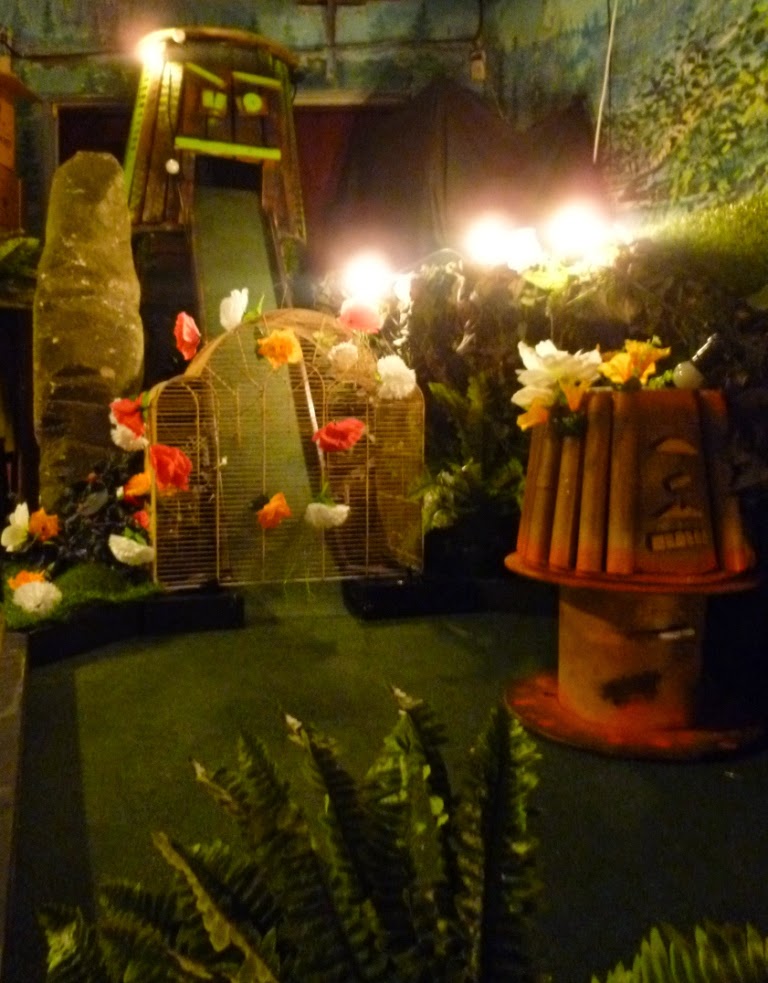 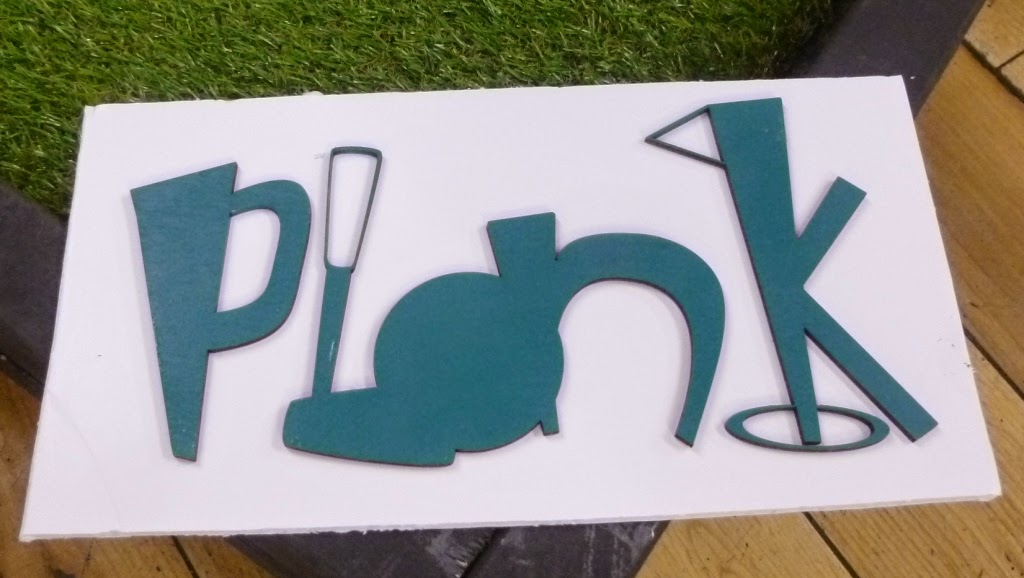 Along with former minigolf Pro Brad 'The Fist' Shepherd we went along to put the course through its paces ahead of its full launch to the public on Wednesday 29 April.


The Crazy Golf course layout is within Efes Snooker Club on Stoke Newington Road and is set-up on either side of the snooker hall with 9 very tricky holes to master.


Plonk Golf has been created from reclaimed materials that have been repurposed to create a very unique miniature golf course. There's a working volcano on the first hole, a birdcage on the hill at the third, a loop-di-loop to tackle on the fourth, and a pool table making up half of the hole on the fifth hole. There are also more pipes and tunnels than you can shake a stick (or golf club) at!


The Plonk Golf course is the brainchild of the team at The House of Revelry and will be open on Wednesdays (6pm to 12.30am) and Thursdays (12pm to 1am) from the 29 April. A round on the course will cost £7.50 per player.


The course was the 596th visited and 360th played on the Crazy World of Minigolf Tour.


In our match-up on the Plonk Golf course I defeated Brad in round one, scoring a 20 to his 27 and setting the clubhouse record.


In our second game we both shot scores of 20. we were very happy to both finish with a hole-in-one on the incredibly tricky 'Jump into the bucket' shot on the ninth hole!


The minigolf course will be changing through the duration of its pop-up at Efes, with new obstacles and hole configurations, which'll certainly make it even more crazy.


For more information and booking details check out the Plonk Golf website.