The Golf Show by American Golf at Event City, Manchester

A visit to the American Golf Show in Manchester.

This afternoon Emily and I swung into day one of The Golf Show by American Golf at Event City in Manchester. We're glad we did as there were plenty of putting opportunities. And Golf Darts!


First up was a round on the TomTom Sports Adventure Putting course. The 6-hole layout became the 729th course we've visited on our Crazy World of Minigolf Tour. It's the 702nd we've been to in the UK and the 429th we've played since our minigolfing travels began in 2006.


In our minigolf match-up Emily picked up the win 13-14 and landed a spot in tied second place on the leaderboard.

Next we had a go on teeofftimes.co.uk's incredibly lengthy Long Putt Challenge.


While neither of us managed to ace it, we did get close.


We then noticed the giant inflatable Dartboard at the end of the hall. It looked brilliant.


The team at Golphin had set-up the Golf Darts game to promote their training programme for youngsters and I must say it was a great way to get non-golfers into giving the game a go. A fine crossover sport.

In our match-up I overturned the minigolf defeat to Emily by scoring 53 with my five chips/throws to her 0!


We then had to go back to the Adventure Putting for another round. This time I picked up the win 13-14.


Finally I stepped up to have a go on the Pressure Putt Challenge in the Skills Zone.


The tricky charity putting challenge saw me attempted to sink a succession of putts from two-foot intervals. It's a lot more difficult than you think. Especially when you're against the clock.

If you miss any of your putts you have to return to the first two-footer and work your way back. I finished on the 8 foot mark, which wasn't too bad. Good fun for the £2 charity donation to the On Course Foundation.

Check out our videos from the event on YouTube.

The Golf Show at Event City is on until Sunday and tickets are free. Book your place online via the American Golf website.

Three weeks ago today we were in Wrexham for another one of American Golf's free events - the Adventure Golf Pairs Championship. Peter Jones and I won the regional qualifier at Clays Golf Centre and will be playing in the Grand Final at The Belfry in September.

My mate and minigolf rival Simon 'Practice' Hall sent me a snap of the Crazy Golf course he spotted at Hope Park while on holiday in Keswick, Cumbria.


Emily and I visited Keswick as part of a big minigolf roadtrip in 2012. On that occasion we played the Putting Course at Hope Park as the Crazy Golf course was very busy.
Posted by Richard Gottfried at Friday, April 28, 2017 No comments:


The Mini-Golf Association of Armenia is holding the country's first minigolf tournament on Sunday 30th April. The event is to be held at Ararat Valley Country Club and places in the Open competition are still available. 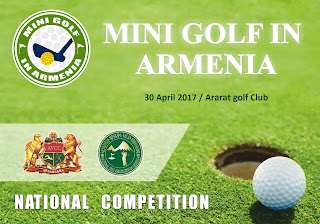 Entry is 3000 AMD (converting the Armenian Dram to Sterling it works out at just under £5!). For further information on the event and registration please contact the Mini-Golf Association of Armenia.

You can see photos of Ararat Valley Country Club's miniature golf course on the Mini-Golf Association of Armenia's Facebook Page. It looks like an interesting, hilly and loopy layout.

The Mini-Golf Association of Armenia is one of 62 members of the World Minigolf Sport Federation.

Visit the National Golf Association of Armenia's website to find out more about minigolf developments in the country.
Posted by Richard Gottfried at Wednesday, April 26, 2017 1 comment:

The 18-hole Adventure Golf course looks very good and is certainly a lot different to the course I found there back in 2011.


A Mr Mulligan's Adventure Golf course is also planned to open in Cheltenham.
Posted by Richard Gottfried at Monday, April 24, 2017 No comments:

Yesterday we spent a nice afternoon playing Boules at Woodstock Pétanque Club in Edgeley, Stockport. The day was even nicer as I won all three of my games! Emily also played well on her first appearance of the new season, with two wins from three games.


In my first game I was teamed up with Richard J to take on Barbara and Joan. Richard had won the first session of the season so was undefeated in his three games so far. It was also the first-time we'd been paired together, but what a team we made, picking up the victory 13-4.


Next up was a game against Emily and Hilary J. For this contest I was paired with Andrew and in a close match we won 13-11.

My final game of the afternoon was a three-on-two game pitting me and David C against the trio of Cath, Hilary J and Jean W. The match was also the last to finish as we battled to a 13-8 victory, the scoreline not showing how close the game actually was.


My record at Woodstock Pétanque Club is now 6 wins and 4 defeats.

Woodstock Pétanque Club meets on the piste at Alexandra Park in Edgeley, Stockport on the second and fourth Sundays of the month. Membership for the year is £10, with a £1 fee for each afternoon you play. A bargain of a price to spend playing a fun and skillful game in great company.

Visit the Petanque in Manchester Facebook Group and Ptonk in the Park Twitter account for more info.
Posted by Richard Gottfried at Monday, April 24, 2017 No comments:

Not sitting down in Stockport

Having a wander round Stockport at the weekend I quite fancied a sit down. Alas, it wasn't to be at this point of my amble.


Check out the Park Bench Appreciation Society and the Dull Men's Club for more thrilling imagery and posts.
Posted by Richard Gottfried at Monday, April 24, 2017 No comments:

This year marks the 150th anniversary of the world's first miniature golf course.

The Himalayas Putting course at St Andrews was created in 1867 specifically for female players to use. We visited and played The Himalayas in 2012. It's a wonderful layout and a must-do for fans of minigolf or 'regular' golf.

To mark the occasion, The British Golf Museum at St Andrews has created a special exhibition - Shining Examples: 150 years of the St Andrews Ladies’ Putting Club - which runs until March 2018.


You can read more about the history of the St Andrews Ladies’ Putting Club on their website. It's interesting to note there had previously been a small putting area set-up before 1860, while the 9-hole course opened in 1867.


Today there is a 9-hole and an 18-hole course, both open to the public for a nominal charge.


We're looking forward to a return visit to St Andrews, a visit to the exhibition and a few more games on the famous links minigolf course.


Visit The British Golf Museum at St Andrews and the St Andrews Ladies’ Putting Club websites to find out more.

Other key dates in world minigolf are:

Visit the World Minigolf Sport Federation's website for details of World Championships taking place this year, as well as events from their 62 member nations.

Check out the online Crazy Golf Museum for more information about the history of minigolf.

We're really looking forward to a return visit to Bournemouth to play the new course.

May is National Golf Month

Next month is National Golf Month! 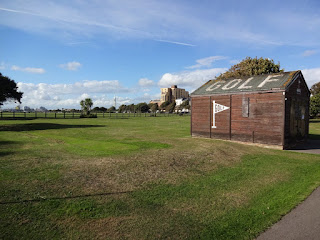 While we're BIG fans of miniature golf, Emily and I do occasionally play a bit of regular golf, albeit mostly Pitch & Putt. We also enjoy playing grass Putting courses and we've visited a fair few of those on our Crazy World of Minigolf Tour.


This year marks the 150th of the world's first miniature golf course. The Himalayas Putting course at St Andrews was created in 1867 specifically for female players to use. It's a wonderful course and location and a real pleasure to play.


Each year there are two quasi-official annual 'days' when you can celebrate the game. National Miniature Golf Day falls on the second Saturday in May. In 2017 this will be on Saturday 13th May. So even more reason to get out and have a round of (mini)golf next month!


Check out the National Golf Month website and social media channels for more info and updates.

Posted by Richard Gottfried at Wednesday, April 19, 2017 No comments:

From the archives - Hastings Minigolf course

A look back at the Minigolf course in Hastings.


Back in October 2007 the Minigolf course in Hastings became the 40th visited on our Crazy World of Minigolf Tour. While it looks innocent enough, it was one of the trickiest courses we've ever played!

The course was replaced by a new Pirate Adventure Golf course in May 2011, which we revisited last month.


Peter Jones and I have qualified for the Grand Final of American Golf's 2017 Adventure Golf Pairs Championship.


Over the weekend we heard we'd won the Regional Qualifier played at Clays Golf Centre in Wrexham and in doing so have booked our place in the final to be played at The Belfry in September.

We can't wait to take on the challenge on the 12-hole Ryder Legends Mini Golf course there!

I reckon you'd have a strong chance of passing your test if you learn to drive with Geoff Capes!

Posted by Richard Gottfried at Tuesday, April 18, 2017 No comments:


On Saturday 8th April we headed to Haigh Woodland Park in Wigan to compete in the first-ever Great Northern Minigolf Open competition played out on the two miniature golf courses in the park.


The second course we played was the old Crazy Golf course operated by the Friends of Haigh Country Park group.


At £1 per game the course is the lowest price we've ever found for an 18-hole course on our travels. Amazing value for money.


The course was incredibly popular and had a good throughput of players all day. It's an interesting layout as the course has been added to over the years so has quite a hotch potch of obstacles. Not that that is a bad thing, it was certainly unique.


The Haigh Woodland Park Crazy Golf course was the 728th visited on our Crazy World of Minigolf Tour and the 701st in the UK. It became the 428th played on our travels since September 2006.


Visit the Friends of Haigh Country Park website for further information and course opening times. Back in 2012 the course was partly derelict, but the Friends group have done a brilliant job of getting it spruced up and fully open again.
Posted by Richard Gottfried at Monday, April 17, 2017 No comments: