Report from the Great Northern Minigolf Open in Wigan


Played over two rounds on the park's two 18-hole courses, Lancley won with a 36 hole score of 87. Stockport's Richard Gottfried was runner-up on 93, with Ramsbottom's Russ Dent finishing in third place on 95. A total of nine players took part in the first staging of the event.


Russ Dent was making a return to competitive minigolf after a seven-year break and rolled back the years with an impressive round of 44 on the Adventure Golf course to lead by five shots after round one. Gottfried and Lancley were in a tie for second after round one.

However, Lancley's visit to the north wasn't for nothing as he stormed to an amazing round of 38 on the Crazy Golf course to take the title and the trophy. 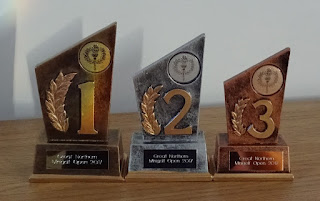 Speaking after his victory Scott said "I'm humbled to have won the first Great Northern Minigolf Open and put my win down to my vast experience of the second course we played today."


Players had travelled from Kent, other parts of Greater Manchester, Bedfordshire and Tyneside to compete in the tournament.


The Aces championship for most holes-in-one was a very close contest. The first course had proven incredibly tough and no players had recorded an ace during the 18-holes. John Moore was the first to hit an ace, doing so on hole 1 of the Crazy Golf course. Richard followed this with a hole-in-one on the second. There was another drought until Russ hit a perfect shot on the 14th hole. Emily managed until the last minute to get an ace, doing so on the 18th. However, it was to be Scott taking the Aces title to go alongside the main event as he hit aces on the 16th and 18th to do the double.