Minigolf superstar Olivia Prokopová has a book and DVD out.

My friend, minigolf rival and all-round miniature golf superstar Olivia Prokopová has a book and DVD out and I've finally added them to my collection. While my Czech language skills are non-existent the book is still well worth a look as it is a great archive and chronicle of Olivia's career.


Flicking through the pages there are lots of brilliant photos from tournaments and courses around the world and it was great fun spotting characters from the world of minigolf - past and present - in the book. 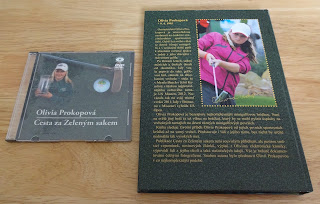 Olivia is the reigning and two-time World Crazy Golf Champion and has won a multitude of titles over her career. Visit Olivia Prokopová's website for more information.
Posted by Richard Gottfried at Thursday, August 31, 2017 No comments:


On Saturday 22nd July we swung by the Paradise Island Adventure Golf centre at Cheshire Oaks for a game on the Coral Cove minigolf course.

The layout was the 745th we've visited and 440th played on our Crazy World of Minigolf Tour.


In our match-up I picked up the win with a score of 43 to Emily's 46. Neither score was enough to trouble the leaderboard for the PIAG Open competition which was running during our visit. Emily did manage to win a free game on the Lucky Last Hole though.


We'll be back to play the Lazy Lagoon course in the future.

A visit to play the four Crazy Golf courses at Junkyard Golf on Brick Lane in London.


On my recent trip to London I got to play the four very crazy minigolf courses at Junkyard Golf on Brick Lane.


Each of the 9-hole courses has a quirky theme from films to music to the circus and it all adds up to a ludicrous miniature golf experience as you putt your way through, down and over all manner of different obstacles.


Having played the current Junkyard Golf course in Manchester I'd seen some similar holes and obstacles, but others were unique to the London venue.


Even though the courses have been built out of scrap and other reclaimed materials the holes are playable - although from some of the tee-off angles I can't help but think the designer/builder is left-handed. My scores were as follows:

The courses were the 456th-449th played and 757th-760th visited on our Crazy World of Minigolf Tour.

The team at Junkyard Golf are on the move in Manchester, with a new permanent venue opening on First Street in September. There's also a new Junkyard Golf course opening in Oxford and plans for more sites around the UK.


Check out the Junkyard Golf website for more info, opening times and prices. 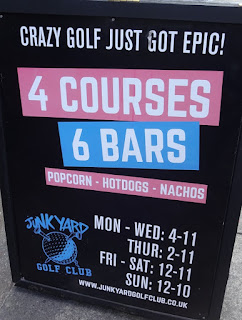 
On my recent trip to London I met up with a bunch of mates and minigolf rivals to visit the indoor minigolf venue at Swingers Crazy Golf.

Swingers is home to two 9-hole Crazy Golf courses - The Lighthouse and The Windmill - and both were proving popular on Monday evening.


Swingers Crazy Golf is a superb venue with two great minigolf courses, excellent service and nice facilities. Everything from the putters to the scorecards have been created to the highest quality and it's a very pleasant place to spend a few hours playing Crazy Golf.


In our minigolf match-up on The Lighthouse course I tied with Gareth Holmes after we both shot a 20. Brad Shepherd was next with 25, while Alan Norman shot a 27 and Paul O'Conner hit a 33.


While we were competing in our own little tourney a qualifying round for Swingers' own Crazy Golf tournament was taking place, with dozens of players competing for the Swingers London Open title.

Back in September 2014 we played a round on the Swingers Crazy Golf pop-up course in Shoreditch, East London. That course became the 581st miniature golf course visited and 347th played on our Crazy World of Minigolf Tour.

Posted by Richard Gottfried at Thursday, August 24, 2017 No comments:

A look at the Adventure Golf course at Thorpe Park Holiday Centre in Cleethorpes.


Many thanks to my friend Gemma Rogers for sending over some snaps of the Adventure Golf course at the Haven Thorpe Park Holiday Centre in Cleethorpes, Lincolnshire. 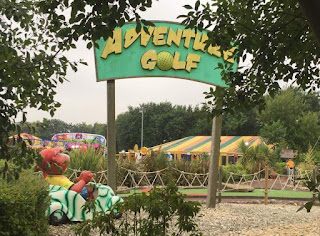 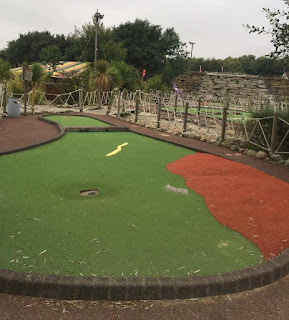 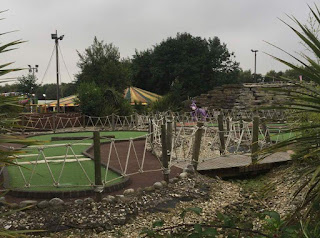 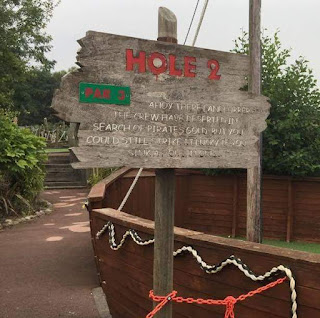 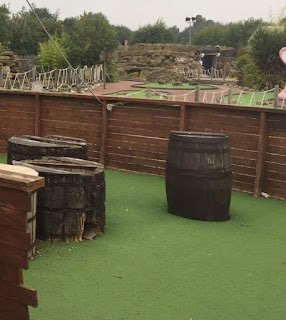 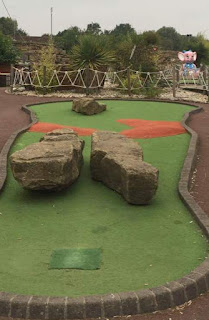 Emily and I visited Cleethorpes back in 2011. The seaside resort is home to a number of Crazy Golf courses - as is the Lincolnshire coast in general - and we did swing by the Thorpe Park Haven on our way to Mablethorpe. We're looking forward to a return visit to Cleethorpes in the future.

Dining out 100% gluten free at The Oxford Place restaurant in Leeds.


We recently visited Leeds specifically so we could once again dine out at The Oxford Place. The restaurant is superb. We had two brilliant evening meals and a great lunch. There are so many nice touches about dining at The Oxford Place. The service is excellent and the food is delicious. It's brilliant that the food is 100% gluten free and safe for Coeliacs. We're looking forward to our next visit already.

Playing at the Lowther Gardens Crazy Golf course in Lytham.


Prior to our trip to St Annes on the Sea to play in the last Mini Major tournament of the season at MiniLinks Golf we'd noticed that Lowther Gardens in Lytham was home to a Crazy Golf course - how we'd previously missed it we don't know as we've been visiting Blackpool and the surrounding seasides since 2008! 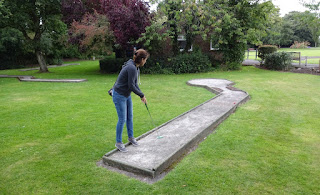 The 9-hole Crazy Golf course at Lowther Gardens was good fun and a unique layout. 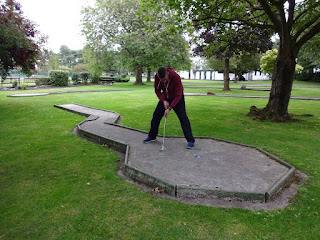 In our minigolf match-up I picked up the win scoring a 28 to Emily's 35.


The course was the 443rd played and 753rd visited on our Crazy World of Minigolf Tour. 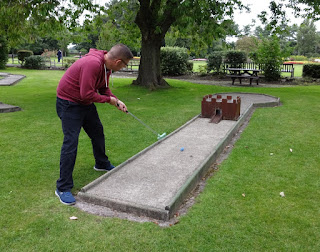 The sign at the park also lists Putting as an activity, but we couldn't see that course.


Photos of the 9-hole Crazy Golf course at Lowther Gardens.