The team at Minigolf course designers and builders UrbanCrazy have put the finishing touches to a brand new Mini Golf course in the town of Barnard Castle in County Durham.

The 9-hole layout opens on Saturday 20th July at 1pm and the official opening will see members of the public able to play the course for FREE! 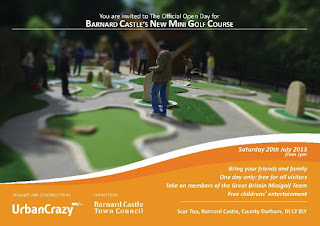 Members of the Great Britain Minigolf Team will be on hand for tips and to take on in challenge matches.

Emily and I are looking forward to giving it a play and making it another course visited on our Crazy World of Minigolf Tour. We’ve played a number of UrbanCrazy’s permanent and portable Mini, Adventure and Crazy Golf courses and they’re always great fun and a test of putting skill.

The course is open for play now and is operated by Barnard Castle Town Council. You can find it located at Scar Top, Barnard Castle, County Durham, DL12 8LY.

Luton Minigolfers Richard and Emily Gottfried received their fifth Great Britain caps as they played in the third World Minigolf Sport Federation tournament held in the UK. Emily became a two-time WMF World Adventure Golf Masters Women’s Champion at the event defeating defending champion Ruth Burke in a sudden-death play-off at the third extra-hole after both players had tied after six rounds.


Emily said “I'm unbelievably happy to win my second World Adventure Golf Master Women’s Title. It was a close-fought battle, with Ruth and I trading the lead between each of the six rounds, and then finally finishing on the same score. The play-off was tense so to win it with an ace on the third-hole was an exciting way to secure the title!"

As part of the Great Britain 3 Team Richard and Emily teamed with Newcastle’s John Moore and Brighton’s Craig Patterson as they took on Germany, Sweden, three other Great Britain teams and a WMF Allstar team comprised of players from Germany and Finland. The GB3 team made the cut for the final round and finished in fifth place overall, defeating the much fancied GB2 team in the contest. Germany won the event, with GB1 runners-up and Sweden in third place.

Richard said “It’s always special playing for the national team and I was pleased to put in a good performance for our team. I was very pleased to shoot a low of 29 in the team final and to finish 19-under par in the individual contest was a good result. Well done to Emily on her women’s title win too, she did very well to recompose herself after a fraught final round to secure the win through the play-off.”

Sunday 16th June also saw the second BMGA British Adventure Golf Open competition take place. The three-round tournament saw Richard finish in 10th place with Emily in 19th in the 23-player field. The result sees Richard move up one place in the BMGA Tour Strokeplay Order of Merit Rankings to 7th of 125 players, with Emily in 44th position. In the BMGA Season Only Rankings for 2013 Richard is in 9th place of 56 players and Emily is in 15th spot.

Ends
Posted by Richard Gottfried at Saturday, June 22, 2013 No comments:

A crazily busy month both in and out of Minigolf!

The last month has been very busy what with moving house from sunny Luton to sunny Leagrave.

Still, this hasn’t stopped us from our Minigolf adventures and I will be writing some new blog posts detailing a couple of new Miniature Golf course visits on our Crazy World of Minigolf Tour, plus reports and photos from the third WMF World Adventure Golf Masters Tournament in Hastings (along with the off course Bar Billiards, Tat and Air Hockey shenanigans) and updates on our rankings in the WMF and the BMGA.
Posted by Richard Gottfried at Saturday, June 22, 2013 No comments:

Email ThisBlogThis!Share to TwitterShare to FacebookShare to Pinterest
Labels: Blogging

Report from the off-course shenanigans in Hastings.

When in the Miniature Golf mecca that is Hastings, East Sussex it is almost guaranteed that after a hard days practice or competition on the seafront courses you'll find a bunch* of Crazy Golfers spending their time in one of the amusement arcades (or 'The Buttons' as a wise man once termed them, Christian Fuchs wasn't it).
At the 2013 WMF World Adventure Golf Masters tournament it was no different as sixteen Minigolfers adventured into the Old Town Buttons for the 2013 World Adventure £2 Tat Challenge and Air Hockey Championships!
With a truly international field competitors from Great Britain faced Swedes, a Finn who resides in Germany and an Englishman from the United Arab Emirates lined up for the seventh ranking Tat Challenge tournament.
With a number of debutees in the tourney it was left to new Buttons Committee member John 'YI' Moore to gather the players ready for the big event and also explain the rules of the contest, with some help from Richard Gottfried.
In a truly enthralling contest there were a number of players racking up a nice haul of tat, while others fared less well, including veteran players including Emily Gottfried and Will Donnelly.
A shocking result came from former Worlds number one player James Rutherford who limped out of the contest with a meagre two bits of tat.
Young gun Adam 'AK47' Kelly was heading for last place, but by tactically not declaring his score of zero until he'd done a bit of ratting enabled him to move up the leaderboard to lucky seventh.
With a strong score of 32 (second only in the all-time list to James Rutherford's massive score of 40 in 2012) Richard Gottfried declared.
With Mike Small, Craig Small, John Moore and Torgny Kjellstrom the final players left with any two-pees in the contest it looked like the win was all but secured.

However, in an extraordinary debut from the Dubai-based player Mike Small managed to keep on winning tat and replenish his tuppenny bit ammo stockpile. With the crowd gathering and excitement building Small eventually ran out of money and his big haul counted.
Astonishingly he also scored 32!
Deciding against a play-off, or even the traditional argument decider of Rock Paper Scissors the players agreed that the contest would be a draw.
Each competitor in the event was allowed to choose one piece of tat as a memento from the 151 pieces the group had won, before the big bag of it was given away to other players in the arcade who had been watching in equal measures of amazement and confusion as the group of players had been in action! 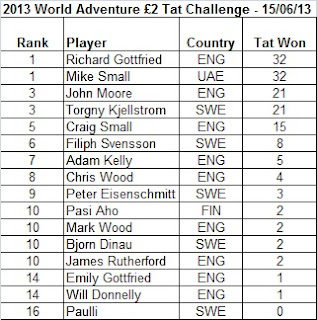 The £2 Tat Challenge Order of Merit has been updated following the contest and now sees 54 players from seven countries ranked! 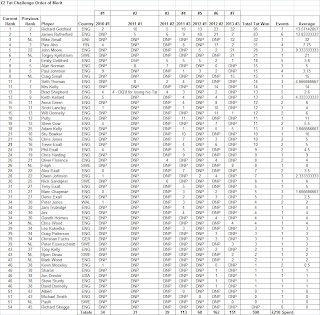 The next Tat Challenge takes places in Hastings in October and will be the WORLDS title match!

In the grand final Pasi (the reigning World Crazy Air Hockey Champion) was bested by Filiph 4-3. Watch the video of the final moments of the match-up.

* Not sure what the collective term is for a group of Crazy Golfers is. Suggestions on a Postcard