We've been visiting Norfolk for a number of years and Great Yarmouth was one of the first seaside resorts we went to on our Crazy World of Minigolf Tour back in February 2007. Unfortunately on that occasion all of the courses there were closed for the season! We've since been back to the resort and other parts of the county and had some great rounds of minigolf.


As of today we've visited 749 courses since September 2006. Of these 721 have been in the UK, with 28 overseas in eleven countries. There are approximately 40 courses in Norfolk and we have visited 32 courses of these so far. Twelve were closed / out of season at the time of our visit. Over the years we have visited eight courses in Great Yarmouth - some of which are no longer there.


Courses played since our first visit to Norfolk in 2007:

Courses visited but not played:


Courses we've played but have since closed:

Courses still to visit in Norfolk:

If you know of any other courses we've missed off the list above, or hear about new courses opening do get in touch or leave a comment on this post.
Posted by Richard Gottfried at Sunday, July 30, 2017 No comments:

A look at the Play4Score miniature golf course in Riga, Latvia.


Many thanks to fellow minigolf enthusiast Simon Dewhurst for sending along some snaps of a miniature golf course he recently played in Riga, Latvia.


It's an 'eternit' type of minigolf course and Simon tells me it was laid out in a circle, the first time he's seen a set-up like it.

Crazy Golf interview on the Ginger and Nuts Show

Interview about our minigolf adventures on the Ginger and Nuts Show.

You can now listen to my interview about the Crazy World of Minigolf Tour from this week's Ginger and Nuts Show online.

Posted by Richard Gottfried at Sunday, July 30, 2017 No comments:

The Scottish Open Putting Championship is running at Putting Plus in Prestwick throughout the summer season.

In addition to the Champion Putter, category Champions include primary and secondary school age; over 60, over 70 and over 80; and the Grandparent and Grandchild Pairs.

This weekend, Saturday 29th and Sunday 30th July between 12 noon until 4pm, the focus is on the Grandparent and Grandchild Pairs category. 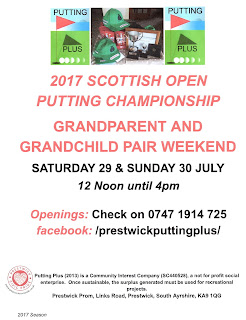 Champions in all categories will be announced at the beginning of September.

You can find out more about the 2017 Scottish Open Putting Championship on the Putting Plus Facebook page.
Posted by Richard Gottfried at Tuesday, July 25, 2017 No comments:

Back in action at the Woodstock Petanque Club


It was great to be back in action at the Woodstock Petanque Club yesterday after a bit of a break in playing the game. The Sunday session began with some coaching from two English Petanque Association coaches who led the group in some training drills and gave some pointing and shooting demonstrations.


It's always interesting receiving some top level coaching and advice and I'll certainly be putting some of the techniques into practice. I'm not sure going straight into a competitive match was the best thing to do after relearning the basics of holding and throwing a boules as my playing partner Carol and I lost 13-2 to Hilary and Dave!

My record at Woodstock Pétanque Club is now 6 wins and 5 defeats.

Woodstock Pétanque Club meets on the piste at Alexandra Park in Edgeley, Stockport on the second and fourth Sundays of the month. Membership for the year is £10, with a £1 fee for each afternoon you play. A bargain price to spend playing a fun and skillful game in great company.

Visit the Petanque in Manchester Facebook Group and Ptonk in the Park Twitter account for more info. You can find out more about the game on the English Petanque Association website.
Posted by Richard Gottfried at Monday, July 24, 2017 No comments:

The Crazy World of Minigolf Tour keeps on rolling


On Thursday we were at the Trafford Centre in Manchester to play at Paradise Island Adventure Golf. On Friday we visited St Annes to play the Crazy Golf and Par 3 MiniLinks courses - and filmed some news items for ITV and PA. Yesterday we visited Sutton Weaver Village near Runcorn, Paradise Island Adventure Golf at Cheshire Oaks, Higher Bebington Recreation Ground near Birkenhead, and Championship Adventure Golf in New Brighton. Before we hit the road we appeared on BBC Radio 4's Saturday Live programme.

The courses we visited in the past week have certainly been a real mixture of minigolf layouts! Full blog posts to follow...

Playing at the indoor Paradise Island Adventure Golf courses at the Trafford Centre.


Yesterday evening we headed along for a couple of rounds of minigolf at Paradise Island Adventure Golf at the Trafford Centre in Manchester. 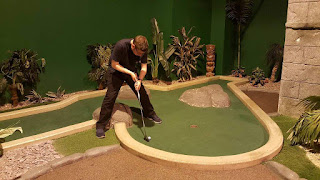 I last played the course back in April 2009 while Emily had a round on the course in April of this year. The Tiki Hut Trail and Temple Ruins Adventure courses were originally the 85th and 86th played on our Crazy World of Minigolf Tour. 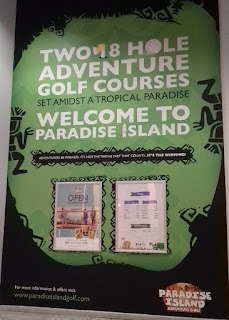 Our rounds on the courses last night were part of the PIAG Open competition running from the 20th to 23rd July, with entry to the contest open to anyone playing a round on the layout. The PIAG Open is also running at the other Paradise Island Adventure Golf venues at Cheshire Oaks, Glasgow, Livingston, Sheffield and Derby.


First up we played the Temple Ruins Adventure where I shot a 39 (including a dreaded 7 on the 5th hole) to Emily's 42. On the Tiki Hut Trail we both improved our scores. I settled into the course a bit more and recorded a 34, with Emily hitting a 38. 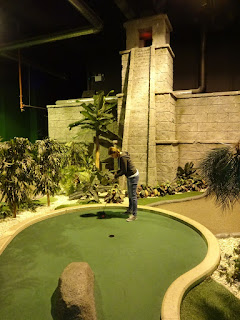 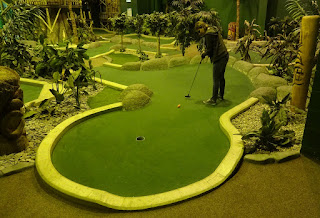 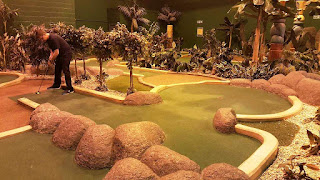 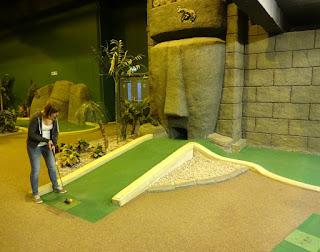 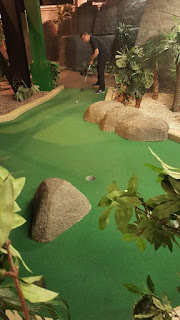 Check out the videos from our visit on our YouTube Channel and on the links below.

The new Mobike cycle hire scheme recently launched in Manchester and this morning I spotted one of the fancy bikes parked up/abandoned/awaiting collection in Cheadle Hulme.


Check out the Mobike website for further details of the scheme and how you can hire one of the bikes.


There have been reports in the news and by police that bikes have been abandoned. However, unlike the London 'Boris Bikes' the Mobikes don't have docking stations, they are simply left in the open ready for collection by the next user.

Handy to know that I can collect one in the outer reaches of Greater Manchester here in the leafy Cheshire/Stockport borderlands.
Posted by Richard Gottfried at Friday, July 21, 2017 No comments: 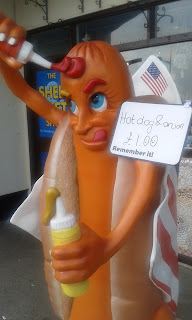 Posted by Richard Gottfried at Wednesday, July 19, 2017 No comments:

Better a Hampion than a Ham & Egger.


Seeing this sign reminded me of the Championship Winning Ham at a butchers in Needham Market, Suffolk. Surely a Ham Championship is a Hampionship...

Posted by Richard Gottfried at Tuesday, July 18, 2017 No comments:

Playing a round of Crazy Golf at Glossop's Manor Park.


On the 28th June the Crazy Golf course in Glossop's Manor Park became the 743rd course visited on the Crazy World of Minigolf Tour. Unfortunately as it was a weekday the course wasn't open to play, so last Saturday we returned to give the course a go. Luckily the weather was a lot better than my visit the week before.


Check out the blog post from my original look at the course at "A visit to the Crazy Golf course in Glossop's Manor Park."


We also got to have a ride on the Miniature Railway which was brilliant fun.

Manor Park is a tremendous facility and we'd definitely visit again. Glossop as a whole is well worth seeing as there are some fantastic views of the Peak District from the town, as well as some interesting shops and pubs there too.

On the 18th June the MiniLinks Par-3 Miniature Golf course in Lytham Saint Annes became the 742nd visited and 437th played on the Crazy World of Minigolf Tour.


MiniLinks Golf hosts a number of public tournaments on the Par-3 Golf course throughout the year and there are four special competitions that run at the same time as the 'Majors' in regular golf. Next up is the MiniLinks Open running from the 20th-23rd July.


My score of 67(+13) - recorded as a 65(+11) with the Beginner's Handicap taken into consideration - saw me finish in tied 13th place in the MiniLinks US Open tournament. A total of 43 players submitted their scores over the weekend, with the winner scoring a round of 48(-6).

There's truth in advertising and then there's this!

Now, I'm all for truth in advertising, but I can't help but think this piece of signage at a butchers in Leeds Kirkgate Market would've benefited from a better descriptor of the product on sale.


The photo certainly caused a stir among followers of the Tripe Marketing Board on Twitter.

Ever since I first spotted tripe on a butcher's stall at Wigan Market in 2012 I've been following the Tripe Marketing Board with interest. Although not enough interest to have actually tried tripe. I'm fairly certain that cow's stomach is something of an acquired taste.

Visit the Tripe Marketing Board website for more information about tripe. You can also use Tripe Adviser to locate sellers of the 'delicacy'.

I spotted this great shopfront while walking through Edgeley, Stockport yesterday evening.


Not sure what's more bizarre - the Taste of Carpets, or being a Watermelon Specialist...

We've also got an Instascran shop in Stockport.


On the 18th June the Pennines Putting Mini Golf course in Lytham Saint Annes became the 740th visited and 434th played on the Crazy World of Minigolf Tour.


Back in 2008 the Crazy Golf course at MiniLinks Golf in Lytham Saint Annes became the 48th visited and played on our Crazy World of Minigolf Tour.


On the 18th June I replayed the course on my day out at the seaside resort.