A look at the Mini Golf course at Canoe Lake in Southsea, Hampshire. 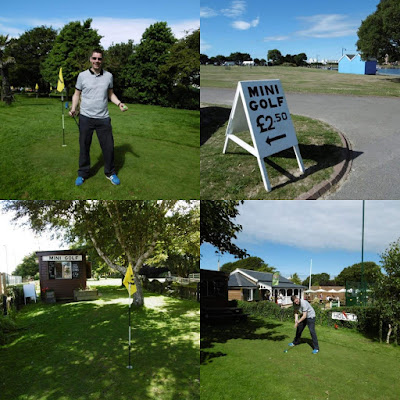 It was one of the best grass putting courses I've played on my travels and the sort of course I could play all day long.

It'll be marvellous when we're able to get back to the seaside.

Finding out about a hotel Putting Course in Shanklin, Isle of Wight.


A big thank you to our friend Philip Walsh for sending over some snaps of a grass Putting Course he found during his recent stay on the Isle of Wight. 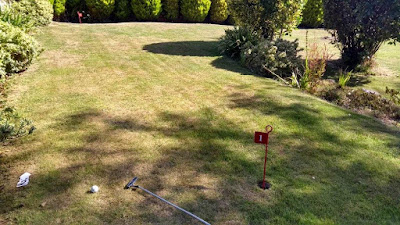 It looks like a nice little course for a putt around. 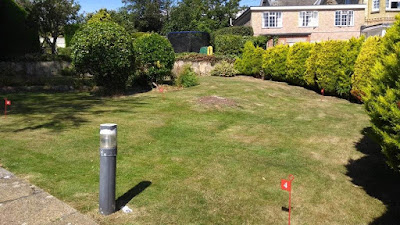 
We're looking forward to a return visit to the Isle of Wight on our Crazy World of Minigolf Tour. We've had a couple of day trips there in the past and played quite a few courses, but need at least a long weekend to play them all.

Philip has also been to the brand new Shanklin Crazy Golf course, Rylstone Crazy Golf and Tea Gardens in Shanklin and the Mini Golf course and Billiard Golf tables in Puerto Colón, Tenerife this year.

Posted by Richard Gottfried at Wednesday, July 22, 2020 No comments:

Crazy Golf at Walton on the Naze in Essex

A look back at the Crazy Golf course we visited at Walton on the Naze in Essex.

We visited the Crazy Golf course at Coronation Gardens in Walton on the Naze, Essex back in 2013.

It was the 535th visited on our Crazy World of Minigolf Tour.

There was also a grass Putting layout next to the Crazy Golf.

Sadly both were closed because of bad weather. It was a shame as Swedish Felt type courses are always interesting to play. The Putting Green looked fun too.

Picture Postcard Magic - Back in Brighton

Here's my latest post for the Reflections of a Bygone Age blog.

Posted by Richard Gottfried at Monday, June 29, 2020 No comments:

A postcard from the Railway Convalescent Home in Herne Bay

A look at an old miniature golf postcard from from the Railway Convalescent Home in Herne Bay, Kent.


One of the nice old minigolf postcards I bought at the last postcard fair I attended was this one by Photochrom Co. Ltd. showing the Railway Convalescent Home in Herne Bay, Kent. 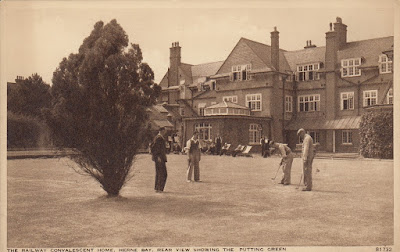 It's postally unused and undated.

The Railway Convalescent Home in Herne Bay was the first of ten homes opened by the railway industry for railwayworkers to recover from sickness and illness.
Posted by Richard Gottfried at Tuesday, May 12, 2020 No comments:

A look at the Crazy Putting Challenge course at Hamptworth Golf Club. 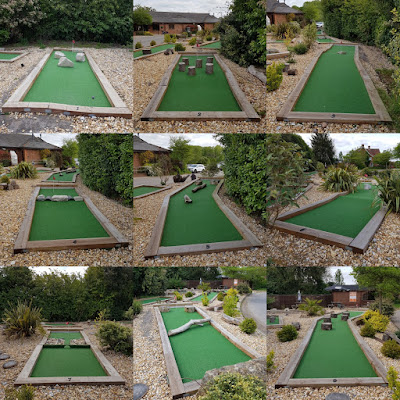 We played there a year ago today.

The excellent 9-hole course in Hamptworth, Wiltshire was the 875th course visited on our Crazy World of Minigolf Tour and the 511th played.

Of all the golf clubs we've visited to play minigolf we found Hamptworth to be one of the very best. It had excellent facilities and we received a very warm welcome.

The Crazy Putting Challenge was the sort of minigolf course I could play all day and not tire of as it offered so many different angles and lines to get a hole-in-one.

Posted by Richard Gottfried at Tuesday, May 05, 2020 No comments:

The Himalayas at St Andrews

A look at The Himalayas putting course, the world's first Miniature Golf course.


Playing The Himalayas course at the St Andrews Ladies' Putting Club back in 2012. 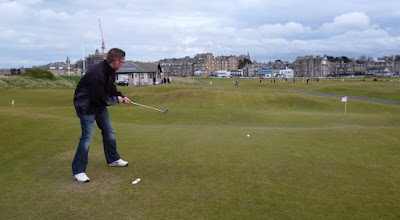 The layout was created in 1867 and is the world's first Miniature Golf course.


When we visited there were two courses to play, an 18-hole course and a 9-hole layout. They were an absolute pleasure to play and one of my very best putting experiences.

The two courses at The Himalayas became the 292nd and 293rd miniature golf courses played on our Crazy World of Minigolf Tour. We've now been to 948 courses since September 2006.
Posted by Richard Gottfried at Friday, April 24, 2020 No comments:

A minigolf postcard from Rhos-on-Sea

A look at an old miniature golf course in Rhos-on-Sea.


One of the brilliant old minigolf postcards we bought at the Stcokport postcard fair was this one showing the Putting Course in Rhos-on-Sea.

Published by E.T.W. Dennis & Sons Ltd the postcard is postally unused and undated.

We've been to Rhos-on-Sea a couple of times on our travels. The first time was in 2009 and there was no sign of the course. The second time was in 2017 when we played the Crazy Golf course at the Rhos Fynach pub and restaurant on Miniature Golf Day. It was built on the site of the old Putting Course.

Posted by Richard Gottfried at Tuesday, April 14, 2020 No comments:

A look at the grass Putting course at Knaresborough's Castle Yard. 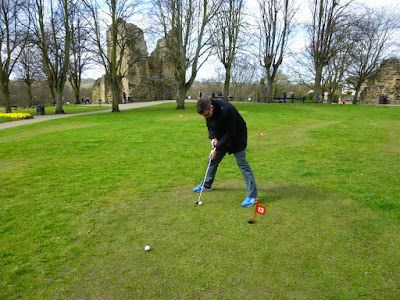 Time really does fly! Looking through our records it's been five years since we visited Knaresborough in North Yorkshire! 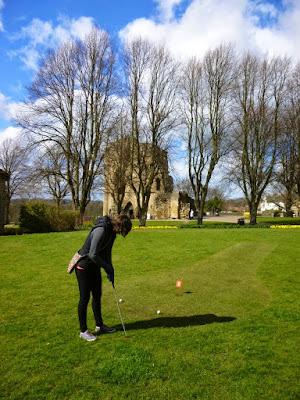 The last time we were there we enjoyed playing the grass Putting course at Knaresborough's Castle Yard. It was a course we missed on our first visit to the town in 2010. 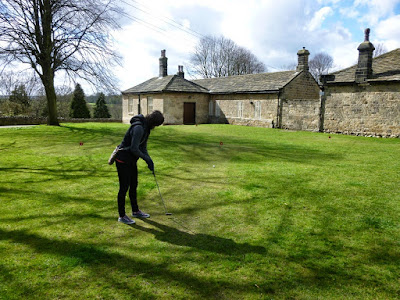 The grass Putting course at Knaresborough's Castle Yard became the 357th course played and 591st visited on our Crazy World of Minigolf Tour. We've now been to 948 courses since our travels began in 2006. 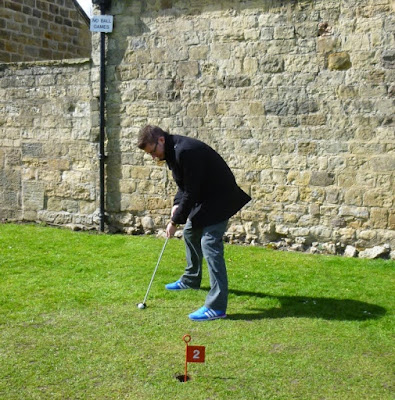 The course is the first we've ever been to that had a sallyport and secret tunnel running underneath it!

The tunnel was built in the late 13th or mid 14th century and was large enough for a small group of armed men to leave the castle secretly at night and launch an attack on any besieging troops.

Knaresborough is definitely on our list of places to go to post-lockdown.

Posted by Richard Gottfried at Saturday, April 11, 2020 No comments:

A look at an old minigolf postcard from Highcliffe-on-Sea.


We bought this nice old postcard showing a Putting Green while we were at the most recent Stockport postcard fair.

We hadn't seen this particular card before and had never heard of Highcliffe-on-Sea.

The town is part of Christchurch borough in Dorset.

The card is postally unused, undated and has no publisher details on it. There is a code of PT3098 on it though. The details on the reverse say "The Isle of Wight from Highcliffe-on-Sea".

It's always nice to see old minigolf postcards. Some give us clues of new places to play, while others show long lost miniature golf layouts.

We had planned to visit Dorset at the end of this month, but that trip has been postponed until after the UK coronavirus lockdown. We'll have to go to Highcliffe-on-Sea and see what's at the same spot now.

I'd be very interested to hear from anyone who remembers the course and knows exactly where it was.

Looking online to see if there's still a course there my eye was drawn to the nearby Hoburne Naish Holiday Park in Barton on Sea where I noticed a minigolf course! Another one to add to our list...
Posted by Richard Gottfried at Thursday, April 09, 2020 No comments:


Two of the old minigolf postcards I bought at the recent Stockport postcard fair were of the Putting course at Marine Gardens in West Worthing.


Neither were-posted and are both undated.


We first visited the course in 2010 and revisited last April.

It hasn't changed too much over the years and is a nice spot to visit if you're in Worthing.
Posted by Richard Gottfried at Thursday, April 02, 2020 No comments:

A look at the Arnold Palmer Crazy Golf course in Cleethorpes, Lincolnshire.

I've played a lot of minigolf courses on my travels and my favourite type is the classic Arnold Palmer Putting Course.


There aren't too many examples left in the UK, but the majority of those still out there are in very playable condition. They are superb fun and a real test of putting skill.

I highly recommend giving them a play the next chance you get to have a game of miniature golf.

One of my all-time favourite courses is the Arnold Palmer Crazy Golf course in Cleethorpes, Lincolnshire. I played it a lot on our trip to the seaside resort in 2018.

With over twenty years of marketing and sales experience each we offer consultancy services to people and businesses looking to set-up miniature golf courses, review their operations, hole designs, contests, tournaments and more. Do get in touch for a chat to see how we can help and work together.
Posted by Richard Gottfried at Monday, March 16, 2020 No comments:

Our travels have taken us to miniature golf venues in Oxford, Birmingham, Manchester, Northwich, Doncaster and Castleford.

A number of those courses have been revisits, including two trips to our local Paradise Island Adventure Golf centre in the Trafford Centre.


As of yesterday, Sunday 19th January, we've visited a total of 945 courses since September 2006.

A look at the Crazy Golf course at Vickersway Park in Northwich, Cheshire on Saturday 11th January 2020. 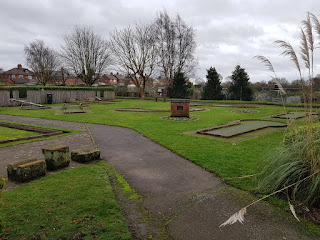 We swung by the Crazy Golf course at Vickersway Park while we were in Northwich at the weekend. 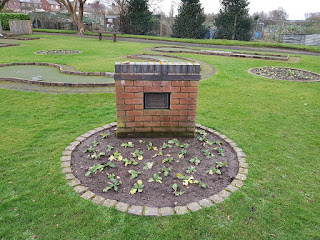 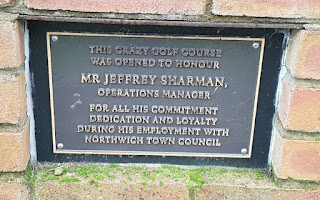 Back in September 2016 the course became the 700th visited on our Crazy World of Minigolf Tour. 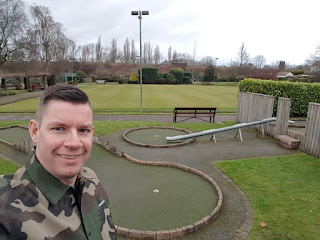 So far this year we've visited nine courses and played at three of them.

Vickersway Park is also home to a Putting course.

Posted by Richard Gottfried at Monday, January 13, 2020 No comments: