Back in 2012 I visited the 510th course on the Crazy World of Minigolf Tour at Mill Hill Park in London. I'd been tipped off about its existence by fellow minigolfer Jon 'The Stance' Angel.


Last weekend our fellow minigolfing adventurers Matt and Helen Dodd were scouting out the north London region for places to play the game and sent through the snaps below. Not a lot has changed by the look of things!

You can also now sign-up to receive our miniature golf newsletter.
Posted by Richard Gottfried at Sunday, February 28, 2016 No comments:

Plonk Golf at the Duke of Edinburgh pub in Brixton

Playing the new Plonk Golf minigolf course at the Duke of Edinburgh pub in Brixton. 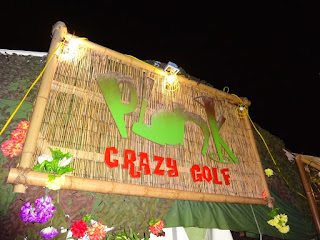 On Friday 26th February we visited the 676th course on our Crazy World of Minigolf Tour when we headed to the Plonk Golf course that is set-up in a marquee in the giant beer garden of the Duke of Edinburgh pub in Brixton, London.


We were joined on this leg of the tour by Swedish minigolf legend Hans Olofsson - a winner of multiple tournaments around the world - and miniature golf professional Andreas Sollman who were on a short trip to the UK.


In our match-up Emily won with a round of 20, including one ace. I was runner-up with a round of 21, aceing the first hole. Hans was the bronze medallist shooting a 23, with Andreas taking home the wooden spoon after scoring a 29.


There is certainly talk of a rematch!

It's always great to see new minigolf courses opening in London. Until fairly recently there was a real dearth of places to play Crazy Golf in the capital, but this is certainly changing for the better.

The Plonk Golf course costs £7.50 a round for 9-holes, and while a bit on the pricey side, it was very good fun. In a relatively small space the Plonk Golf team have put together a great layout. Many of the holes had good hole-in-one opportunities and there were a few very tricky holes too.

Playing Crazy Golf in a pub is also a nice novelty. We've played a few Minigolf and Crazy Golf courses in Pub Beer Gardens over the years. In fact Plonk Golf are opening more pub courses - with set-ups at The Four Thieves pub in Clapham and The Peoples Park Tavern in Hackney.

You can also now sign-up to receive our miniature golf newsletter.
Posted by Richard Gottfried at Saturday, February 27, 2016 No comments:

The World Minigolf Sport Federation, the international governing body for miniature golf, has published the latest edition of the General Class Rankings for the year ending 31st December 2015.


In the Nations Rankings Great Britain is ranked 13th of 30 countries, up from 16th place. Fourteen GB players (13 men and 1 woman) have contributed to the nations ranking between 2013 and 2015. Germany, Sweden and the Czech Republic lead the rankings.

Once again Emily and I are both in the General Class Rankings.


Aside from the March 2011 list Emily and I have been in the sport's international rankings since November 2008 following our debut for the Great Britain team at that year's Nations Cup championships in Tampere, Finland.


It's nice to be listed alongside my friend Lavdim Zylfiu. He's a great ambassador of the sport and his country of Kosovo. I had the pleasure of competing against him in his international debut at the 2011 WMF World Adventure Golf Masters in Hastings. This year Lavdim is helping to organise the 2016 edition of the tournament on his home course in Prishtina.


Check out the WMF website where you can find out more about the sport, as well as the Junior and Senior Rankings - both lists feature GB players.

The Great Britain Minigolf Sport Team is sponsored by UrbanCrazy, suppliers of permanent and portable mini and crazy golf courses.


The World Minigolf Sport Federation (WMF) is the umbrella organisation of Minigolf sports association's worldwide and continental associations in Asia, Europe and America.

There are more than 38,000 competitive minigolf players registered with the WMF via the 55 member nations, with 900-plus clubs between them. Over 1,000 courses are approved for official competitions and around 1,500 minigolf tournaments held each year.

You can also now sign-up to receive our miniature golf newsletter.
Posted by Richard Gottfried at Saturday, February 27, 2016 1 comment:

The opening of the brand new Swingers Crazy Golf course is getting closer. 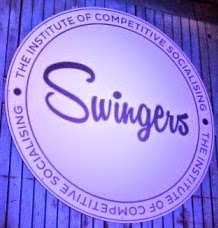 Swingers Crazy Golf is opening on the 27th May 2016 on a brand new site and will have two 9-hole courses - The Lighthouse and The Windmill.


In September 2014 we played a round on the Swingers Crazy Golf pop-up course in Shoreditch, East London. The course became the 581st miniature golf course visited and 347th played on our Crazy World of Minigolf Tour. Check out our blog from the visit.


For more information check out the Swingers Crazy Golf website.

You can also now sign-up to receive our miniature golf newsletter.

The course was first on display at the Venice Biennale last year and you'll soon be able to play the course when it's set up in the main gallery at the New Art Exchange in Nottingham from the 2nd April to the 19th June.


Our friends Gareth and Lhurlyn Holmes were lucky enough to visit the course in Venice. Check out their guest blog post for more pics.

We can't wait to give it a play on our Crazy World of Minigolf Tour.

You can also now sign-up to receive our miniature golf newsletter.
Posted by Richard Gottfried at Thursday, February 25, 2016 No comments:

An update on Saltburn MiniGolf.


The new minigolf course in Saltburn-by-the-Sea is nearing completion and it looks great.


The marvellous new attraction on the Lower Promenade in Saltburn-by-the-Sea is a 10-hole course built by the minigolf marvels at UrbanCrazy.


We've played many many UrbanCrazy courses around the country and they're always very good fun and a nice test of putting skill.


Saltburn MiniGolf opens to the public on Saturday 19th March, with a Grand Launch on Saturday 26th March.


We can't wait to get along for a game.


Check out Saltburn MiniGolf on Facebook for more photos and a video showing how the course has developed in the last few months.

You can also now sign-up to receive our miniature golf newsletter.
Posted by Richard Gottfried at Wednesday, February 24, 2016 No comments:

I've always had an eye for a bargain. This has been honed even more so in the eight years since I was diagnosed with Coeliac Disease.

Shopping for gluten and wheat free food is a hassle at the best of times - not to mention the trouble with gluten free prescriptions - and one of my bugbears is the fact that most supermarkets reduce the price of their free from food incrementally, rather than sensibly! This means that the best you can often hope for is to pay about £1.50 for an item near its sell by / use by date, rather than £2 to £3. It's a rare thing indeed to find gluten and wheat free goodies for mere pence.

That was until I found this great haul in Morrisons this evening.


There were also some bagels and another loaf of artisan bread in the reduced section, but I'm not greedy so left them for some other poor Coeliac to pick up.


Ahead of the Royal Bun Throwing to celebrate the Queen's 90th Birthday, Abingdon-on-Thames will be hosting the second-ever World Bun Throwing Championships to find the town's best bun thrower.

Read more over on the World of Bun Throwing blog.

Posted by Richard Gottfried at Wednesday, February 24, 2016 No comments: 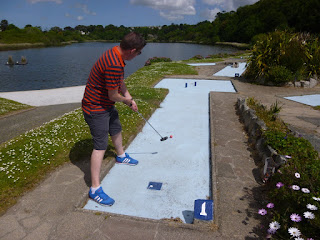 The 631st course visited on our Crazy World of Minigolf Tour was the Crazy Golf course at Swanpool Park in Swanpool, Falmouth, Cornwall. 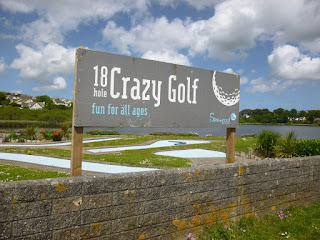 The 18-hole Crazy Golf layout was the 32nd played on our tour of the South West of England and the 373rd played overall on our tour. 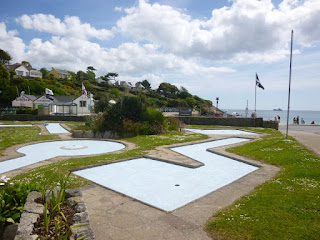 It's certainly a unique course. The colour of the concrete was very different to the norm. And the hole configurations weren't particularly normal. It was a real test and good fun too. 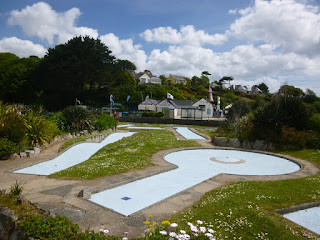 Its in an excellent location and we had brilliant weather on our visit. 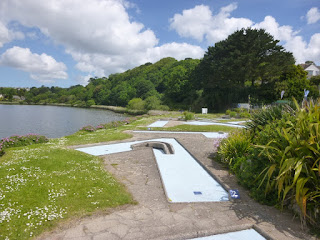 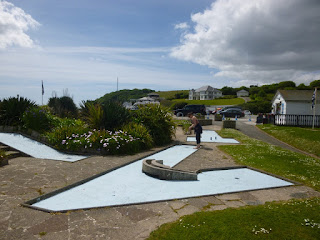 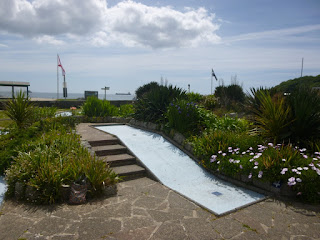 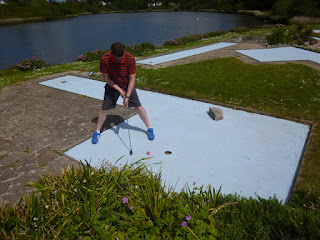 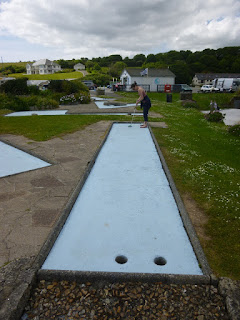 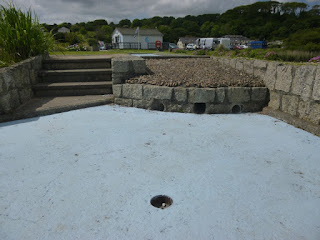 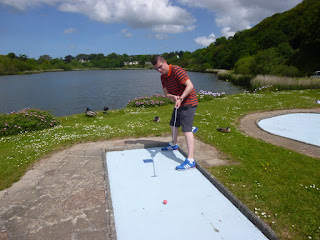 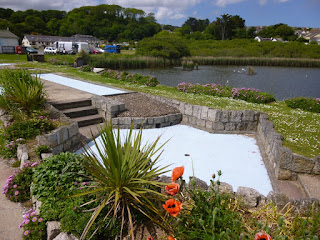 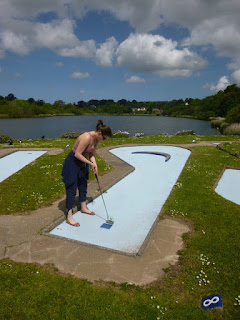 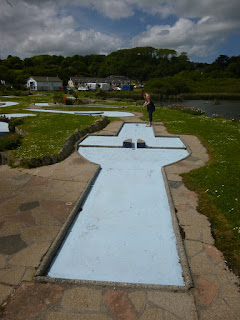 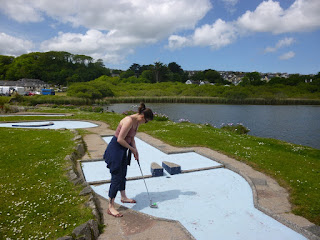 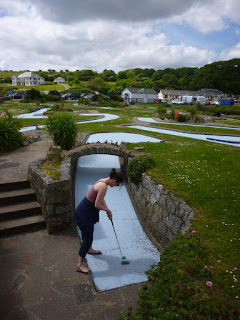 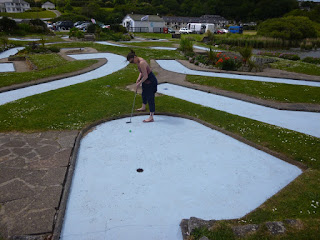 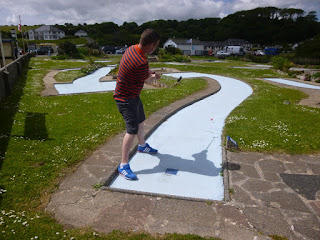 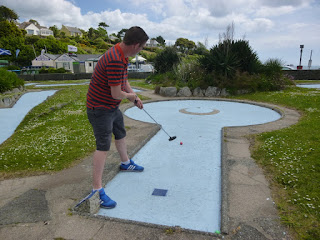 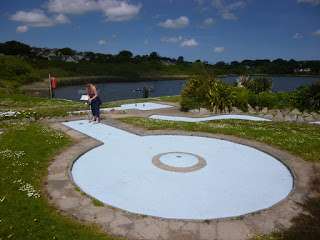 The course is open all year round. For more information, opening times and prices visit the Swanpool Beach website.

You can also now sign-up to receive our miniature golf newsletter.
Posted by Richard Gottfried at Monday, February 22, 2016 No comments: