I recently found out there's been a change to one of the minigolf courses in my home city.


Our fellow minigolf adventurers Matt and Helen Dodd were in Oxford and swung by Cutteslowe Park and let us know the course there is now an adventure golf-style layout.


The new Crazy Croc's Mini Golf in Cutteslowe Park is a 9-hole layout.

It'll be a new course to visit on our Crazy World of Minigolf Tour in the future.
Posted by Richard Gottfried at Thursday, March 05, 2020 No comments:

A look at the Wildforest Falls Adventure Golf course at Hotham Park in Bognor Regis.

Our friends and minigolf rivals Matt and Helen Dodd were recently in Bognor Regis and swung by the new Wildforest Falls Adventure Golf course at Hotham Park. 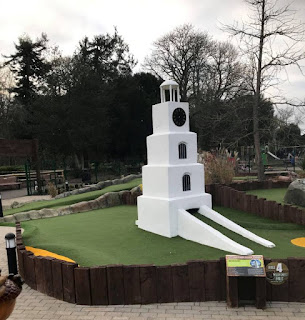 Matt said the course was good but tough and had quite a few holes he’d never seen before. 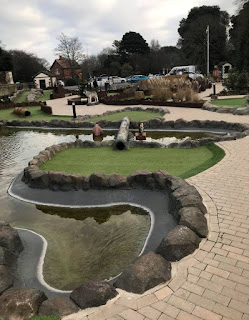 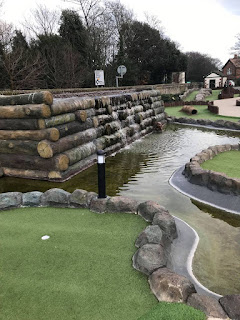 While in the park Matt also had a look at the old Crazy Golf layout which is now a picnic area. 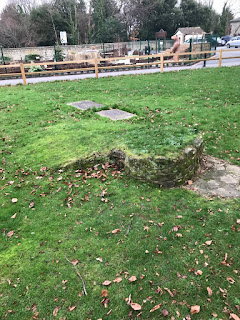 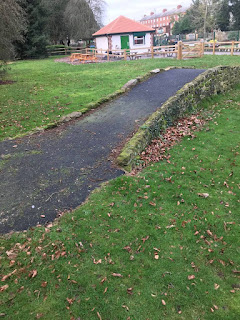 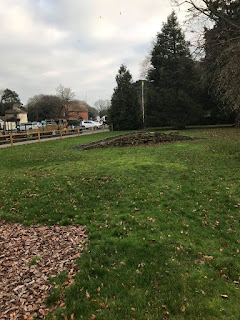 We're yet to play the Wildforest Falls Adventure Golf course. The old minigolf layout at Hotham Park and the Putting course that was formerly on the site were the 273rd and 274th played on our Crazy World of Minigolf Tour back in October 2011.

Our fellow minigolf adventurers Matt, Helen and Emily Dodd have been on a trip to the fine county of Lincolnshire and found plenty of courses to visit there. With the Dodd's staying at holiday parks they were able to play some courses that we never got to when we first visited Lincolnshire in 2011.


This Arnold Palmer Putting Course was played in the Haven Golden Sands Caravan Holiday Park in Mablethorpe. What a great discovery.

The hole below is a regular sight on Arnold Palmer Putting Courses and is very often a good opportunity for a hole-in-one. But this is the first time I've the hole with additional obstacles!


There is another Arnold Palmer Crazy Golf course in Mablethorpe. The Hooks Island Crazy Adventure Golf was a 13-hole layout (12-holes, plus lucky last hole) when we played it in 2011.

Lincolnshire is a real hotspot for minigolf. Skegness alone has 102-holes spread across nine seafront courses!

Back in 2012 I visited the 510th course on the Crazy World of Minigolf Tour at Mill Hill Park in London. I'd been tipped off about its existence by fellow minigolfer Jon 'The Stance' Angel.


Last weekend our fellow minigolfing adventurers Matt and Helen Dodd were scouting out the north London region for places to play the game and sent through the snaps below. Not a lot has changed by the look of things!

You can also now sign-up to receive our miniature golf newsletter.
Posted by Richard Gottfried at Sunday, February 28, 2016 No comments:

Report from the 2015 Worlds £2 Tat Challenge in Hastings

Results from the off-course shenanigans at the amusements in Hastings.


Since 2010 Crazy Mini Golfers from around the world have descended on the amusement arcades of Hastings to compete in 'Tat Challenge' tournaments.


2015 would be no different at 23 competitors lined-up to fight for the honour and prizes that come with being the World Tat Challenge Champion.


Following the first day's play of the World Crazy Golf Championships the group headed over the road to the Old Town Amusement Arcade for 20-minutes of non-stop tu-penny pushers gaming to see who could land the largest haul of prizes. There had been some doubt as to whether the event would take place, as in the lead-up to the contest on Saturday there had been reports that the Old Town Buttons had closed down and the site was up for sale!


Fortunately the Old Town ones were open and buzzing on the big day itself. Rendering the recce to the buttons next to The Deluxe pointless. Speculation that an alternative venue would be 'Keith's' buttons down by The Stade were also dismissed as hogwash. Especially when the rumour included something about the use of ten pence pieces. A ridiculous notion.


The 2015 champion was Helen Dodd with a total of seven bits of tat, leaving her closest rivals trailing in her wake with a mere four bits. The defending champion Kate 'Mrs' Kelly was unable to hold onto the crown as she slipped to a disappointing last place after drawing a blank.


The modern era of the sport has quite possibly seen advances in technology that favour 'the house' as the days of one person winning an event with 40 pieces of tat (as veteran James Rutherford rocketed into his pocket during the great summer of sport in 2012).


With a total prize bag of 51 tats Helen declared that the toys and stuff would be put to good use as the 'second best Crazy Golfer in the Dodd household' (Emily Dodd) would be given them when Helen and Matt arrived back home.

To date ten official Tat Challenge competitions have been played with 800 bits of tat won for a total of £382.


Our fellow minigolf enthusiasts Matt and Helen Dodd recently visited the seaside resort of Weston-super-Mare and went along to the Dismaland theme-park created by renowned street artist Banksy. They were kind enough to send along some photos of the five-hole Mini Gulf course which features an oil caliphate theme.


When I asked Matt, the reigning Surrey Invitational Minigolf Champion, what the it was like, he said "It was a dreadful course."


"But it's Dismaland after all." he added.


With the Dismaland site closing this weekend it's a course we won't ever get to play on our Crazy World of Minigolf Tour. But it's great to know that plenty of people got to have a go on the layout before it shut down.

Matt and Helen recently hit 102 minigolf courses visited on their travels! Their landmark 100th course visit was the Tropical Trail course at Treetop Adventure Golf in Cardiff, Wales. That's another course on our 'to play' list! Matt also let me know there's an Adventure Golf course at Fishers Farm Park in Wisborough Green, West Sussex - that was their 101st course played.


The Dismaland Bemusement Park was built on the site of the old Tropicana Lido on Marine Parade in Weston-super-Mare, North Somerset. You can watch the Dismaland advert on YouTube to see what you've missed.

Weston-super-Mare has some permanent mini and crazy golf courses that we have played. We've also played a few art installation miniature golf on our tour too.


Speaking after his maiden victory, new Surrey Invitational Tournament champion Dodd said “Thanks to everyone who took part. The competition was strong and it went to the final hole. I look forward to defending my title next year.”


The first stage of the S.I.T. was won by Burpham’s Oliver ‘The Machine’ Florence with a score of 45. However, the British International and veteran of tournaments including the 2010 AMF Asian Open Championships, was unable to compete in the second round due to prior commitments.


Play moved to the Jungle Island Adventure Golf course where Luton’s ‘Squire’ Richard Gottfried collected the round victory with a score of 45.


However, this wasn’t enough to take the overall title as Matt Dodd’s score of 46 saw him take a one-shot victory and claim the Surrey Invitational Tournament title and trophy for 2014.

The Surrey Invitational Tournament 2015 will be played in Guildford.
Posted by Richard Gottfried at Monday, November 17, 2014 4 comments: