12 years of the Crazy World of Minigolf Tour

This Sunday marks 12 years since we began our Crazy World of Minigolf Tour down on the south coast of England at Treasure Island Adventure Golf in Southsea, Hampshire.

At the end of the round on the Victory Trail Adventure Golf course I fired the cannon on the Lucky Last Hole to win a FREE GAME and our minigolf travels have rolled on since then. How different would our lives have been if I'd missed my shot on the final hole?


I've never used the prize vouchers - instead they are safely deposited in the Crazy Golf Museum.


Since 2006 we've visited a total of 846 miniature golf courses in the UK and overseas. 38 of the courses have been overseas, with 808 of them in the British Isles.

We've certainly logged some miles and spent some dough on our pursuit!

While we've been able to play a lot of the courses multiple times, some of those locations we've visited have been closed, derelict or abandoned. As of last weekend we've played a total of 500 different courses, with number 500 being the unique indoor miniature golf course at Holey Molies in Skelton-in-Cleveland.


When our travels began on the 30th September 2006 there were approximately 600 courses in the UK. That number has skyrocketed and the figure is now closer to the 1,000 mark. A phenomenal number, especially when you consider how many courses have closed in the last decade too.

The game is experiencing a real boom, with a range of unique and interesting minigolf layouts opening up. From Crazy Golf bars, to jungle-themed Adventure Golf courses, to traditional seaside courses and classic putting greens there is a rich variety of courses to play.

Earlier this year we had a crazy 42-hours in Sweden where we were able to visit nine courses, including our 800th overall - at Swing by Golfbaren in Stockholm.


Since that trip in February it's amazing to think we've reached the 846 mark!

We're looking forward to the next 12 years and beyond. It won't be long until we hit the magical 1,000 courses visited milestone either.

Check out our Crazy World of Minigolf Tour list of courses for links to the places we've been.
Posted by Richard Gottfried at Friday, September 28, 2018 No comments:

Treetop Adventure Golf at The Printworks in Manchester

A visit to the new indoor Treetop Adventure Golf course at The Printworks in Manchester. 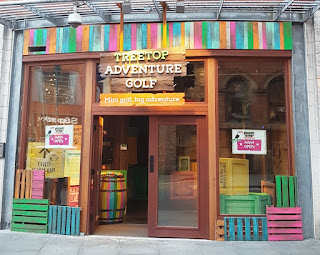 On Thursday 6th September we visited the new Treetop Adventure Golf venue at The Printworks in Manchester city centre. It's a superb setting.


The visit to the brilliant courses also made a new piece of minigolf history as they were the 799th and 800th courses we've visited in the British Isles, bringing our total to 838 courses visited since September 2006.


The first Treetop Adventure Golf location opened in Cardiff in 2015 and like that site the new Manchester location features two 18-hole courses.


The venue has excellent theming and very playable holes. It's not an easy layout and that's a good thing. You can plan your shots to get some skillful holes-in-one.

In our first game on the Ancient Explorer course Emily stormed to victory with a round of 37 to my 40, scoring three holes-in-one in the process.


In our second game, played on the Tropical Trail course I managed to win with a score of 37 to Emily's 45.

Emily won the Aces Championship, shooting five in total compared to my three.


We're looking forward to a return visit to see if we can reach the top of the leader-board.

The team at Treetop Adventure Golf are also opening a course at the Highcross Shopping Centre in Leicester. We're looking forward to playing there on our Crazy World of Minigolf Tour when it opens in 2019.


Happy Miniature Golf Day. Where will you be playing a game (or two) of minigolf today?


Each year there are two quasi-official annual 'days' to celebrate the game. The second of these awareness days is Miniature Golf Day and it's ALWAYS on the 21st of September.

It's a year since the American Golf National Adventure Golf Championships

Looking back at the Grand Final of the American Golf National Adventure Golf Championships on Sky Sports Golf.

Peter Jones and I competed in the tournament held at The Belfry Hotel & Resort on the 8th September 2017, with the event shown on Sky Sports Golf in November last year.

The minigolf tournament was part of the Family Championship episode as shown on Sky Sports Golf last November. The National Adventure Golf Championships can be seen from 26m 55s.

We had qualified for the Grand Final after winning the Welsh qualifying tournament in Wrexham in April.