From the Vault - Southsea Minigolf 2006

Mini Golf blog post about the visit to the Treasure Island Adventure Golf course in Southsea, Hampshire and what would become the very first miniature golf course visited and played on the Crazy World of Minigolf Tour.

Back in September 2006 I had not yet made my debut in the professional world of competitive minigolf, in fact the trip to the Treasure Island course in Southsea would be the beginning of the journey of the Irregular Mini Golf Tour and led to me, Emily & Christopher Gottfried joining the British Minigolf Association (BMGA).

On a wet and windy weekend of Saturday 30th September and Sunday 1st October 2006, four hardy souls played 18 holes of Crazy Golf on the Victory and Warrior Trails of Southsea's Treasure Island course (Scorecard outer below). 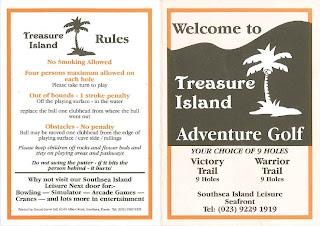 As you will see from the Scorecard below our scores were quite below-par. 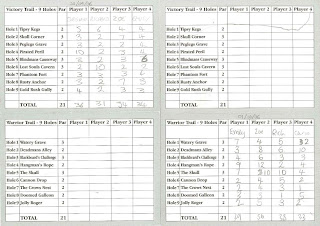 And from reviewing the video of us playing on the 4th Hole (Hangman's Rope) of the Warrior Trail (below) you can also see we were not playing to Official BMGA Minigolf Rules (which we did not know about at the time). In fact we had:
- No six shot limit
- A form of 'seaside' Crazy Golf rules in play, each of us playing our first shots and subsequent shots in order of player (rather than Minigolf rules of each player holing out first, or even 'proper' Crazy Golf rules where the player furthest from the hole plays their second shot first)
- No movement of the ball to allow for backswing when up against an obstacle

These two rounds constituted the first ever Irregular Mini Golf Tour event - The Southsea Invitational Tournament. Before the advent of play-offs the competition had joint winners, tied on 69 (+27)* were myself and Christopher Gottfried, with Emily Gottfried in third place and Zoe Bates in fourth.

* The course Par for each 9 Holes was given as 21 shots, whereas in a BMGA tournament each hole has a Par of 2 shots, regardless of the course scorecard/local rules. Therefore an 18 Hole Course would have a Par of 36. So for example, re-scoring my rounds to BMGA Standards I would have scored 63 (changing my scores of 10, to Sevens) but would still have been 27 over the Par of 36.

In an interesting note, despite my many Minigolfing travels around the country and all of the 'Lucky' 19th holes played, I have only managed to win one Free Game Pass/Token, and that was on the 30th September 2006 when I managed to 'Fire the Cannon' on the 19th Hole in Southsea - a prize I still treasure (below). 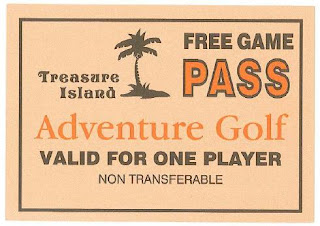 So the visit to Southsea was the beginning of my travels to Minigolf courses around the UK, playing in BMGA tournaments, winning the BMGA British Club Championship and representing Great Britain in the Nations Cup in Finland.

And there's still lots more of the adventures in the world of Minigolf (and other obscure and minority sports) to follow.

This website is awesome! Thank you for doing such a great job.

We've enjoyed travelling the UK playing Crazy Golf, so glad to see you have enjoyed reading about it.

Excellent work on the blog it's awesome. I was wondering if I could pick your brains as you are the expert on mini golf. I am looking at building a course and would be very appreciative of your input.

All the very best,

Our Crazy World of Minigolf Tour did not exist 14 years ago. That all changed on the 30th September 2006!