Both Richard & Emily made significant improvements to their world rankings with Richard qualifying for the final and eventually finishing in 17th place (up from 39th in 2007). Emily finished in 43rd place (up from 54th in 2007), and was also the third ranked player (of nine) in the Women’s World Crazy Golf Championships that was played in parallel with the main tournament.

All 68 competitors played six qualifying rounds (three on Saturday, two on Sunday) on two 18-hole courses, with the top ranked 18 players making the cut to take part in the final round.

The overall winner was Tim ‘Ace Man’ Davies from Hastings who lifted his fifth title, last year’s winner Chris Harding was second and Andy Exall was third. Finland’s Pasi Aho just missed out on a podium place after finishing in fourth place. Davies won with a seven round total of 250 (-2), an average of 1.98 shots per hole.

Emily finished with a six round total of 265 (+49), an average of 2.45 shots per hole, after rounds of 42, 37, 49, 46, 47 and 44. She said “I was pleased with my performance, as I started off the tournament strongly and improved on last years’ position. The tournament was tougher than usual, with a strong local contingent and some extreme weather conditions, but I really enjoyed it and can’t wait to go back again next year.”

The calm before the storm. 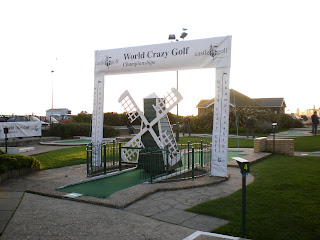 The 18 finalists line up before the 7th round. 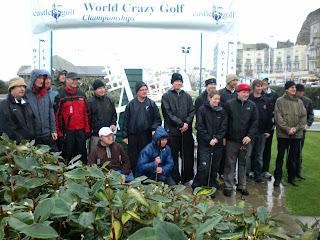 Richard & Emily Gottfried at the end of the tournament. 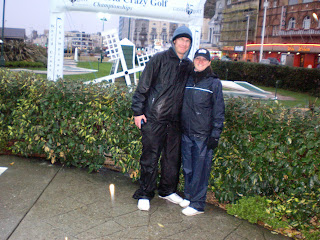