Nine years of the Crazy World of Minigolf Tour

Today marks nine years since the start of our crazy golfing travels! 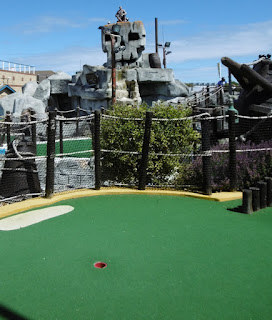 Back on the 30th September 2006 we visited my brother Christopher down in Southsea, Hampshire and while there had a game on the Treasure Island Adventure Golf course on Long Curtain Road near Clarence Pier. On the lucky last hole I managed to 'fire the cannon' and won a free game. The rest is history!


Since that first course visit we've visited a grand total of 671 courses around the world. Of these we've played 389, while 282 of them have been unplayable for a variety of reasons.


Earlier this year we hit some BIG minigolf landmarks on our tour, with visits to the 600th and 650th courses in overall and in the UK while on holiday in the South West of England.

This summer I also revisited Southsea for Christopher's Stag Do and managed to squeeze in a round on the Victory Trail Adventure Golf course at Treasure Island - and I once again hit the top hole to win a free game!

We estimate there are around 50 more courses we're yet to visit in the UK. Although when we began there were around 600 courses!

Check out the photos and links below from some of our landmark course visits.

Many thanks to everyone who has helped us out with tips of where to play over the last nine years. It's much appreciated.

I wonder where we'll have traveled to by this time next year!

Picking up a prize in a Splash Point Mini Golf course online competition.

The course was the 181st played on our tour and we've revisited a number of times since. It's well worth a visit.

Splash Point Mini Golf has hosted a number of tournaments since opening and the layout is a real test of minigolf skill. Check out the great video from the 2012 British Masters filmed by the team at 2dogimaging.

Visit the Splash Point Mini Golf website for more details. The @Worthing_Golf Twitter feed is also worth following as there are frequent reports on local weather conditions, just in case you turn-up in Sunny Worthing to find the course closed owing to inclement weather.


Our fellow minigolf enthusiasts Matt and Helen Dodd recently visited the seaside resort of Weston-super-Mare and went along to the Dismaland theme-park created by renowned street artist Banksy. They were kind enough to send along some photos of the five-hole Mini Gulf course which features an oil caliphate theme.


When I asked Matt, the reigning Surrey Invitational Minigolf Champion, what the it was like, he said "It was a dreadful course."


"But it's Dismaland after all." he added.


With the Dismaland site closing this weekend it's a course we won't ever get to play on our Crazy World of Minigolf Tour. But it's great to know that plenty of people got to have a go on the layout before it shut down.

Matt and Helen recently hit 102 minigolf courses visited on their travels! Their landmark 100th course visit was the Tropical Trail course at Treetop Adventure Golf in Cardiff, Wales. That's another course on our 'to play' list! Matt also let me know there's an Adventure Golf course at Fishers Farm Park in Wisborough Green, West Sussex - that was their 101st course played.


The Dismaland Bemusement Park was built on the site of the old Tropicana Lido on Marine Parade in Weston-super-Mare, North Somerset. You can watch the Dismaland advert on YouTube to see what you've missed.

Weston-super-Mare has some permanent mini and crazy golf courses that we have played. We've also played a few art installation miniature golf on our tour too.


My friend Dylan Harris runs Lupine Travel, a business that operates holidays and tours to the far flung reaches and hidden corners of our world. On his recent trip to North Korea he and his party competed in the first Pyongyang Minigolf Open Tournament!


The Pyongyang Minigolf Open Tournament was a warm-up event to the 2015 DPRK Amateur Golf Open competition which was part of the Lupine Travel trip.


The competition was held on North Korea's first Miniature Golf course which is next to the Rungna People's Pleasureground. The course itself has a small clubhouse that sells beer and food.

Caddies from the course accompanied each group of three players and marked their scores. Players were also able to choose from a selection of professional minigolf balls to use on the tricky course.

The winner of the Pyongyang Minigolf Open Tournament was Calum Slowther from the UK with a score of 46.


Organiser Dylan said "It was an interesting course to play. The staff there were very knowledgeable about minigolf and the various types of balls. We were told that the course used to be in Kim Jong Un's personal residence but he decided to gift it to the North Korean people and had it moved to its current location. The red velvet covered bench that can be seen on the photos is where it is claimed Kim Jong Un sat while he directed the workers on where to place each hole."


Dylan added "We were told the course holds local competitions and we were introduced to one of the members of staff who'd won the most recent staff competition. I'm going to get lots of practice in for the event next year and hopefully come back as a winner next time."

Lupine Travel run trips every month, but the next minigolf event will take place in October 2016 to coincide with the DPRK Golf Open.

Lupine Travel was formed in 2007 and specialises in trips to unique destinations. You can travel to North Korea, Chernobyl, Eritrea, Turkmenistan, Transnistria, Iran, Iraqi Kurdistan, Bhutan/Nepal, Somaliland/Ethiopia, Antarctica and more with Lupine Travel. Check out the Lupine Travel website for details of the trips available.

The Miniature Golf course in Pyongyang is of the 'Eternit' variety found in Continental Europe. Emily and I have played some of these courses in Finland, Sweden and in the UK. Emily also holds the British Women's Record score on the format with a round of 24(-12) when she competed at the WMF Nations Cup in Stockholm, Sweden in 2011.

Posted by Richard Gottfried at Monday, September 21, 2015 No comments:

Today is a BIG day in minigolf!

According to various sources 'Miniature Golf Day' is always celebrated on the 21st of September - a date that is always highlighted on our calendar. So head out and have a putt, there are hundreds of courses in the UK (indoors and out) and tens of thousands of layouts around the world.

Check out the post 'Mini Golf Days in 2015' for more info on days to celebrate the great game.

On Saturday 9th May it was 'National Miniature Golf Day' and for the occasion we headed to the English seaside resort of Skegness - a hotbed of minigolf!


Each Monday is #MinigolfMonday on Twitter, so hashtag your Crazy, Mini and Adventure Golf posts. 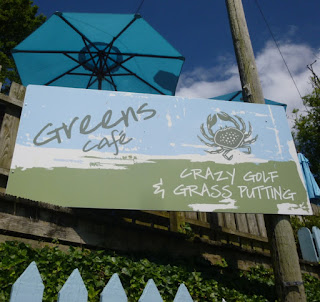 This summer we hit the BIG minigolf milestone of our 600th course visit as part of our holiday in the south west of England. During that trip we also made our 650th visit when we arrived at Greens Cafe, Crazy Golf and Grass Putting in Padstow Harbour, Cornwall.

Greens Cafe is home to a brilliant Crazy Golf course that has 18 unique holes. We've played a lot of minigolf courses with concrete surfaces and they are not always that playable. The Green's course was not only playable, but skill-based and great fun too. We'd definitely play there again.


The course was the 629th visited in the UK and the 378th played overall. It was also the 51st visited and 12th played on our holiday roadtrip.


We really enjoyed our round on the course and both scored some great holes-in-one. In our match-up we tied on a score of 34.


There's also a good looking Pitch & Putt course at Greens, however we didn't have time to play it this time.

We really liked the scorecards at the course, and a really nice touch was receiving a sticker for scoring a hole-in-one. Some great minigolf souvenirs.

To date we've visited 670 minigolf courses on our Tour, with 21 of them overseas. This means the next course we visit will be the 650th in the UK. When we began travelling to visit all the courses in the UK there were around 600!