Are Clacton-on-Sea and Bognor Regis the worst seasides in the country?

Clacton-on-Sea and Bognor Regis have been voted as the worst seaside resorts in the UK.

We're big fans of the seaside and have visited many coastal towns and resorts, including Clacton-on-Sea and Bognor Regis, on our minigolf travels over the last 13 years.

Seaside resorts were rated in ten categories in the Which? survey. Clacton-on-Sea and Bognor Regis were both rated poorly for their attractions, peace and quiet, scenery and value for money.

Bamburgh, Northumberland was rated as top of the 100 seasides. We haven't been there, but did drive past it on our way to nearby Seahouses as that was more our cup of tea.


As with most things, it really does depend what you want from a trip to a seaside. If you want a sedate place then Clacton and Bognor are probably not for you, but even saying that I have some nice memories of picnicking in the gardens near the seafront in Clacton and there are some very good spots for a more tranquil wander in Bognor Regis.


We've been to some seasides that other people rave about and haven't been impressed at all. That could be down to us being us, or it could be because of the time of year we visited, the weather on the day, or a number of other factors.

I've been to seven of the seasides ranked in the top ten. Only one of those, Southwold, would possibly rank in my top ten.

Looking at the bottom ten seaside resorts I've been to all of them, many multiple times. I'd select some of them for my top ten.

A few years ago another poll rated the Lincolnshire seaside resort of Skegness as one of the world's worst holiday destinations, on a par with Pyongyang, North Korea. I disagree with that result. Pyongyang only has one minigolf course, whereas Skegness has ten courses on the seafront so it is head and shoulders above the North Korean city.


We're looking forward to return visits to both Bognor Regis and Clacton-on-Sea. The towns have new minigolf courses we've yet to play too, an even better reason to go again.

Do you agree with the results of the survey?

Have you been to Clacton-on-Sea or Bognor Regis? What did you think?


Plans for the temporary Crazy Golf installation were announced earlier this year and the new course is now open to play.


The 9-hole Crazy Golf course is free to play and is a partnership between Rochester Cathedral and Rochester Bridge Trust. The layout has been supplied by HM Adventure Golf.


It's fair to say the pop-up Crazy Golf course's appearance in a religious setting has caused some controversy.

However, it's not the first time minigolf and cathedrals have mixed. Back in 2017 a complaint was made about a devil obstacle on a Crazy Golf course at the Winchester Hat Fair. That course was set-up in the grounds of Winchester Cathedral.

The Rochester Cathedral Crazy Golf course is from the same range as the course I recently played at The Palace Fun Centre in Rhyl.


You can play the Rochester Cathedral Crazy Golf course until the 1st September.
Posted by Richard Gottfried at Tuesday, July 30, 2019 No comments:

Visiting the Crazy Golf course at Onchan Pleasure Park on the Isle of Man. 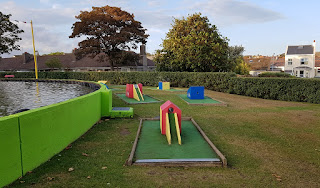 Last summer we had a holiday on the Isle of Man and notched up five more course visits on our Crazy World of Minigolf Tour. One of which was the Crazy Golf course at Onchan Pleasure Park. 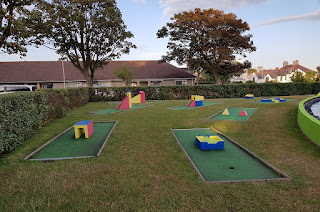 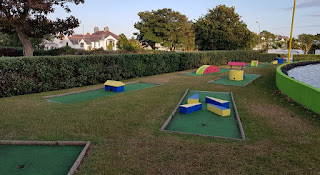 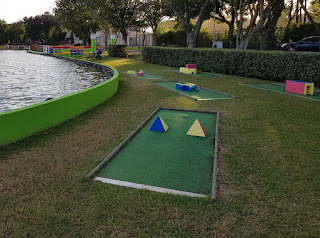 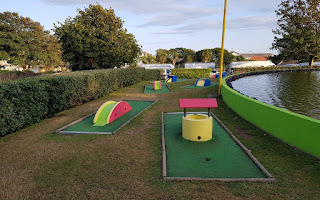 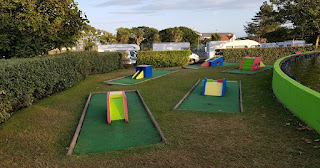 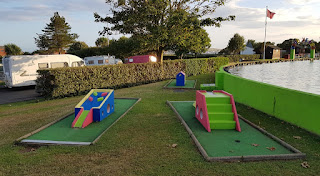 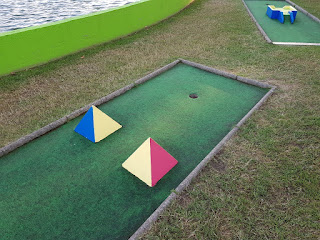 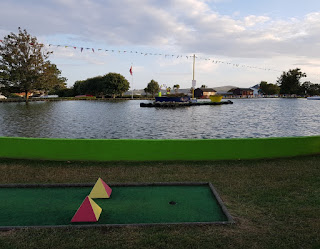 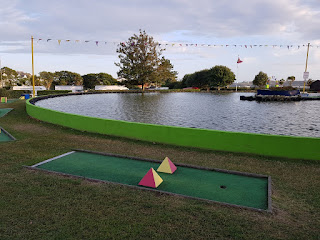 The 9-hole Crazy Golf course at Onchan Pleasure Park was the 825th visited and 490th played on our travels.

Posted by Richard Gottfried at Tuesday, July 30, 2019 No comments:

A look back at our visit to the Torre Abbey Pitch 'n' Putt course in Torquay, Devon. 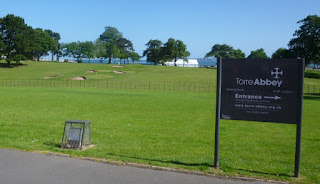 On our summer holiday around the South West of England back in 2015 we visited 62 miniature golf courses on our Crazy World of Minigolf Tour.

One of those courses was the Torre Abbey Pitch 'n' Putt course in Torquay, Devon. 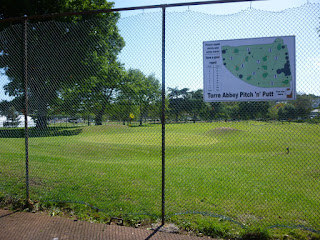 The course was the 623rd visited on our travels.

Squeezing 62 course visits into two-weeks was a BIG task and it wasn't possible to stop at, or play all of the Mini, Crazy and Adventure Golf courses, or all the Putting Greens and Pitch & Putts we saw on the trip, or those we'd heard about beforehand.

Minigolfnews blog: Bringing an old minigolf course back to life

My latest blog post at Minigolfnews is about the work of Blackpool Fulfilling Lives and Blackpool & the Fylde Street Angels and the project bringing an old Crazy Golf course back to life.

The teams at the two organisations in the seaside resort have joined forces to refresh and reopen the Princess Parade Crazy Golf course on Blackpool's North Shore.

You can view my guest blog posts at Minigolfnews.
Posted by Richard Gottfried at Sunday, July 28, 2019 1 comment:

A look at the Arnold Palmer Putting Course in Exmouth, Devon. 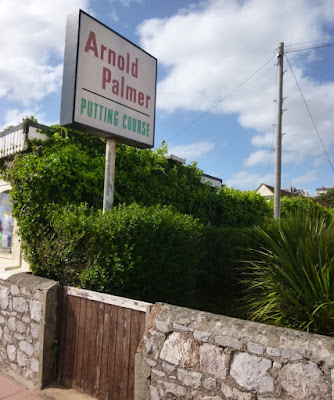 We stayed in Exmouth, Devon for part of our summer holiday in June 2015 so we could visit the Arnold Palmer Putting Course on the seafront.

Unfortunately the course wasn't open on the day we visited and even more unfortunate is the fact that the course is now consigned to history as it was demolished in 2016.


It was a 10-hole course, with a lucky 11th hole where you could win a free game if you rang the bell with your shot.

The Arnold Palmer Putting Course in Exmouth was the 611th course visited on our Crazy World of Minigolf Tour.


Sadly over the years a number of Arnold Palmer Putting Courses in the UK have been closed, abandoned, demolished or converted beyond recognition.

As well as the loss of the Exmouth Arnold Palmer course, the two Arnold Palmer courses in Great Yarmouth have been replaced by one Adventure Golf course. The two courses in Cliftonville, Margate were closed in 2014 and removed shortly after. The course that was once in Folkestone is no longer playable - as it was used to make an art installation on the promenade.

Luckily you can still find playable examples of Arnold Palmer Putting Courses - in varying conditions and some with modifications - in the following locations:

If you know of any Arnold Palmer Putting Courses missing from the lists above please do get in touch.

Of the 912 courses we've visited since September 2006, 25 have been Arnold Palmer Putting Course locations.

Posted by Richard Gottfried at Saturday, July 27, 2019 No comments:

Crazy Golf course on the Promenade in Ilfracombe, Devon

A look back at our visit to the Crazy Golf course in Ilfracombe, Devon.

During our summer holiday around the South West of England back in 2015 we visited 62 miniature golf courses on our Crazy World of Minigolf Tour. 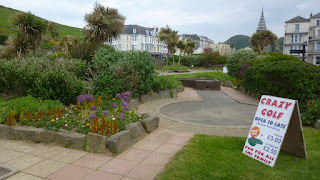 The last of the seaside courses on the trip, and the penultimate course visited, was the 12-hole Crazy Golf course on the Promenade in Ilfracombe, Devon. 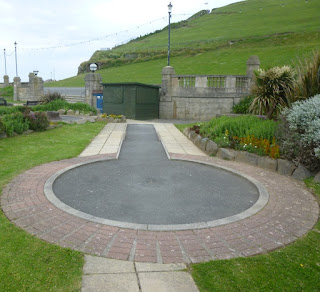 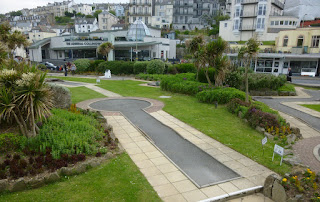 The course was the 660th visited on our travels. 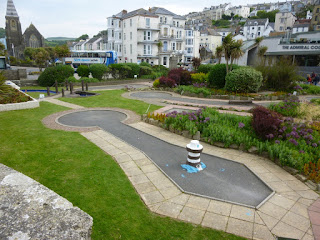 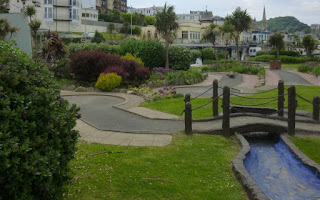 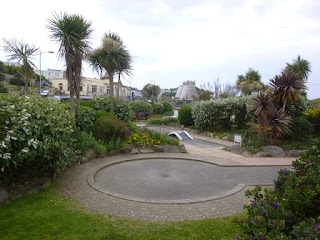 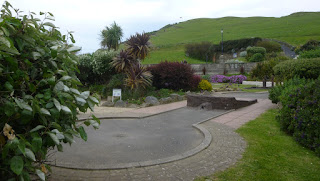 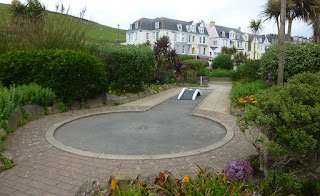 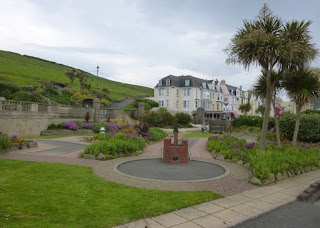 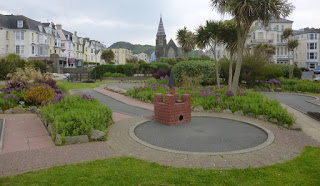 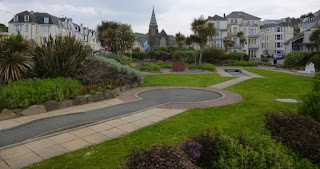 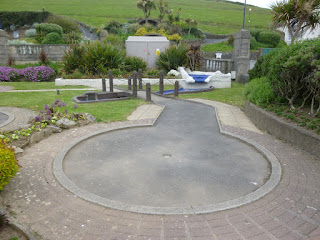 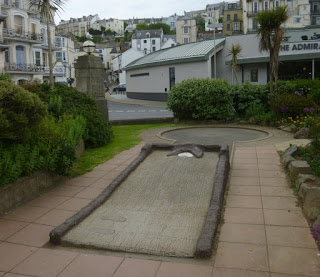 Squeezing 62 course visits into two-weeks was a BIG task and it wasn't possible to stop at, or play all of the Mini, Crazy and Adventure Golf courses, or all the Putting Greens and Pitch & Putts we saw on the trip, or those we'd heard about beforehand.