One from the Crazy World of Minigolf Tour archives - Tee Party Crazy Golf at The Club House in Manchester. 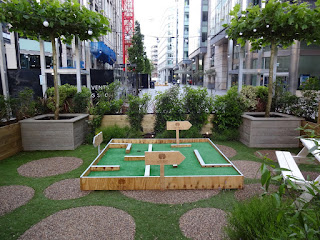 Three years ago we made the move up to Greater Manchester from Luton. Just after arriving I was in Manchester city centre and found a Crazy Golf course at Spinningfields.

Unfortunately I was one day too late to play it! 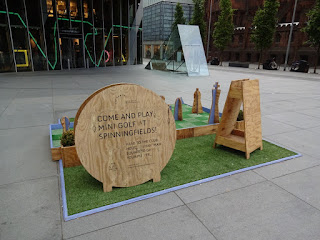 Luckily the holes were still in place, so I was able to at least look at them in the shopping and dining area.


The Spinningfields Tee Party Crazy Golf course became the 684th visited on our Crazy World of Minigolf Tour since September 2006. We've now been to 911 courses.


Luckily since we've moved up here a number of new permanent minigolf courses have opened up in the city centre, including Junkyard Golf on First Street, Roxy Crazy Golf at Roxy Ball Room on Deansgate and Treetop Adventure Golf at The Printworks.
Posted by Richard Gottfried at Tuesday, July 09, 2019