There are two fun minigolf events coming up at Minigolf Neuhaus in Germany.


Both are taking place on Saturday 27th July, with a family event taking place from 3pm and the first-ever Moonlight Minigolf competition at the course following at 8pm until 11pm. 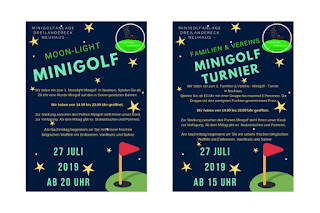 
The course at Minigolf Neuhaus is a Swedish Felt type layout.

Minigolf Neuhaus is the sister course of Minigolf Beverungen, that layout is of the Eternit Miniature Golf variety.

Both are popular playing surfaces in continental Europe. There are a few Eternit and Swedish Felt courses dotted around the UK and we've played a number of them on our travels. Emily is particularly good at playing on Eternit Miniature Golf lanes and during the 2011 WMF Nations Cup tournament in Stockholm, Sweden she set a British Women's Record with a round of 24(-12) on an 18-hole Eternit course.

We've never played minigolf in Germany, although we did visit the seaside resort of Cuxhaven on one of our first holidays together back in 2002.

Charter member of the Crazy World of Minigolf Tour Christopher Gottfried has visited some courses in Germany on his cycling trips in Europe, including layouts in Nittel, Zeltingen-Rachtig, Traben-Trarbach, Kobern-Gondorf and Berntkastel-Kues.