Dinosaur Safari Adventure Golf at the A1 Driving Range in Arkley


Me, Emily and Brad spotted the building work on a new Adventure Golf course while we were on the On The Buses Event around Elstree & Borehamwood on Saturday 18th June!

The course is not open yet (obviously), but digging around online I found the promotion for it (and the surrounding golf range etc.) has started, and it looks like it is planned to open in early-July 2011.

Fingers crossed all goes well with the rest of the build, we look forward to giving it a go when it opens.

I managed to take one quick photo of the construction site as we were passing, as it's visible from the road. 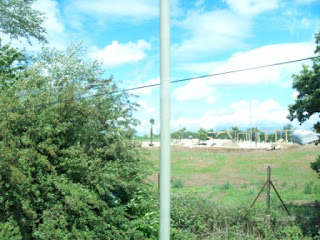 Dinosaur Safari website (under construction as at 20th June 2011)

I spoke to the man at the A1 Driving Range today and all they are waiting for now are the Dinosaurs, then they are ready to go ahead and open the course to players!

I phoned the course today and found out it is now open :-)

Can't wait to give it a go!

The Dinosaur Safari Adventure Golf also has a website http://www.dinosaursafari.co.uk/

We've now played the Dinosaur Safari Adventure Golf Course at Arkley, you can read our match report and see some photos here.

The British Minigolf Association (BMGA) will be holding a Public Minigolf Tournament at the Dinosaur Safari Adventure Golf course at the A1 Golf Centre in Arkley, Hertfordshire on Saturday 20th October.

More details are available at the following links:

Membership of the British Minigolf Association is available free of charge for standard membership, or £20 for 2012 Season BMGA Tour Pro membership. Check out the BMGA Membership Page for more information.