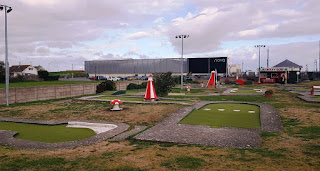 Last September we revisited one of our favourite minigolf courses while on the Holiday on the Buses fan-club weekender in Prestatyn.


The Arnold Palmer Crazy Golf course on Bastion Road is a superb layout and a real test of putting skill.


Once again we competed in The Butler Cup Holiday on the Buses Crazy Golf tournament, a title I was defending!


The tournament part of the Holiday on the Buses Weekender in Prestatyn is organised by the On the Buses fan-club and held at the Bastion Road Crazy Golf course.


Prior to 2018 the Butler Cup tournament had two categories - Pro and Amateur - as quite a few professional minigolfers are also members of the fan-club! In 2014 Emily won the first edition to feature the Pro category. Brad Shepherd won the 2015 event, no tournament was held in 2016, while I won in 2017.


In 2018 57 players competed in a single title 18-hole one round shoot-out with Brad Shepherd once again lifting the title - in a tie with a fellow fan-club member. I was next in the rankings after the joint winners.


We're looking forward to our next visit to play the course.

Link:
- On the Buses fan-club
Posted by Richard Gottfried at Wednesday, February 13, 2019 No comments:

The Butler Cup Holiday on the Buses Crazy Golf tournament

Part of the Holiday on the Buses Weekender in Prestatyn is a Crazy Golf tournament organised by the On the Buses Fan-club and held at the Bastion Road Crazy Golf course.


The Butler Cup tournament has two categories - Pro and Amateur - as quite a few professional minigolfers are also members of the fan-club! In 2014 Emily won the first edition to feature the Pro category. Brad Shepherd won the 2015 event, while no tournament was held in 2016.


The 2017 competition took place on Sunday 24th September and saw 23 players compete in one 18-hole round shoot-out.


In the Butler Cup contest for Pro players staying at Pontins for the Fan-club Weekender I scored a round of 35(-1) to take the win - a far-cry from my dismal sixth place finish in 2014. Alan 'Stormin' Norman shot a 37 to take the runner-up spot, with Emily in third on 38.


Also competing in the Pro category were Brad 'The Fist' Shepherd who scored 39, Seth 'Wandsworth' Thomas who hit a 40 and Chris Jones who shot a 43.


In the Holiday on the Buses Amateur category Ad Burton took the win with a score of 49, with Paul Thompson runner-up with a round of 51.


Local minigolf professional Peter 'The Crazy Aced Assassin' Jones shot the low score of 33 to take the overall honours on the day.


Check out the On the Buses Fan-club's website for more information.

Link:
- The On the Buses Fan-club
Posted by Richard Gottfried at Wednesday, November 01, 2017 No comments:

It was in Enfield.

Enfield’s branch of Barclay’s bank was the location of the world’s very first cash machine – opened and used by Reg Varney on this day in 1967!


As a big fan of On the Buses I had a chance to see the Reg Varney Star Plaque on the Elstree & Borehamwood Walk of Fame by the train station during the On The Buses Fan Club 40th Anniversary event in 2011 and it was great to follow this up with the chance to have a photo at ‘Stan Butler’s’ cashpoint!
Posted by Richard Gottfried at Tuesday, June 27, 2017 No comments:

Holiday on the Buses Reunion Mini Golf Competition in Skegness

Report and results from the Holiday on the Buses Reunion Mini Golf Competition in Skegness.


On the last day of our holiday weekender in Skegness, Lincolnshire we visited the Arnold Palmer Putting Courses on North Parade to complete the two-day Skegness Minigolf Championship. The one-round played on the 18-hole Grass Putting course was also a chance to play the Holiday on the Buses Reunion Mini Golf Competition with local competitors Eric Huckle and Steven Huckle.

In September last year we competed in 'The Butler Cup' On The Buses Fan Club Crazy Golf Tournament on the 18-hole Arnold Palmer Minigolf course in Prestatyn, Wales, and we'd planned to meet-up with our friends from the fan club when next in Skegness. In the Prestatyn event Emily had won the 'Pro' category, with Eric winning the 'Am' title.


It was a great fun event on a marvellous minigolf Putting course. We're looking forward to visiting Skegness again in the future.

Link:
- On the Buses Fan Club
Posted by Richard Gottfried at Thursday, May 14, 2015 No comments:

Playing Crazy Golf on the course at Pontin's Prestatyn Sands Holiday Park during the Holiday on the Buses Weekender 2014.


After spending the morning of the 28 September playing for The Butler Cup at the Crazy Golf course just off the seafront in Prestatyn we headed back into the Pontin's Prestatyn Sands Holiday Park to make good use of the facilities on our Holiday on the Buses weekender.


As well as going swimming (in the very same pool they filmed scenes for Holiday on the Buses) and recreating some of the action from the film by riding around the camp on the big bikes, we had ANOTHER game of Crazy Golf. 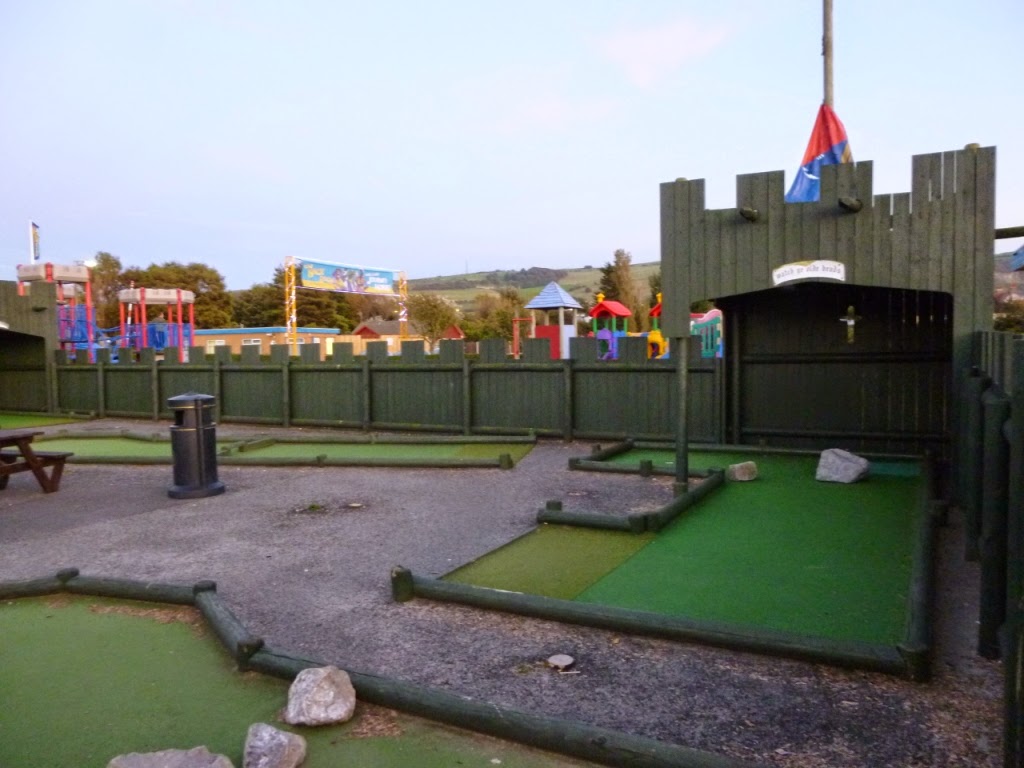 The 9-hole course on the park is free to play with a £5 deposit required. 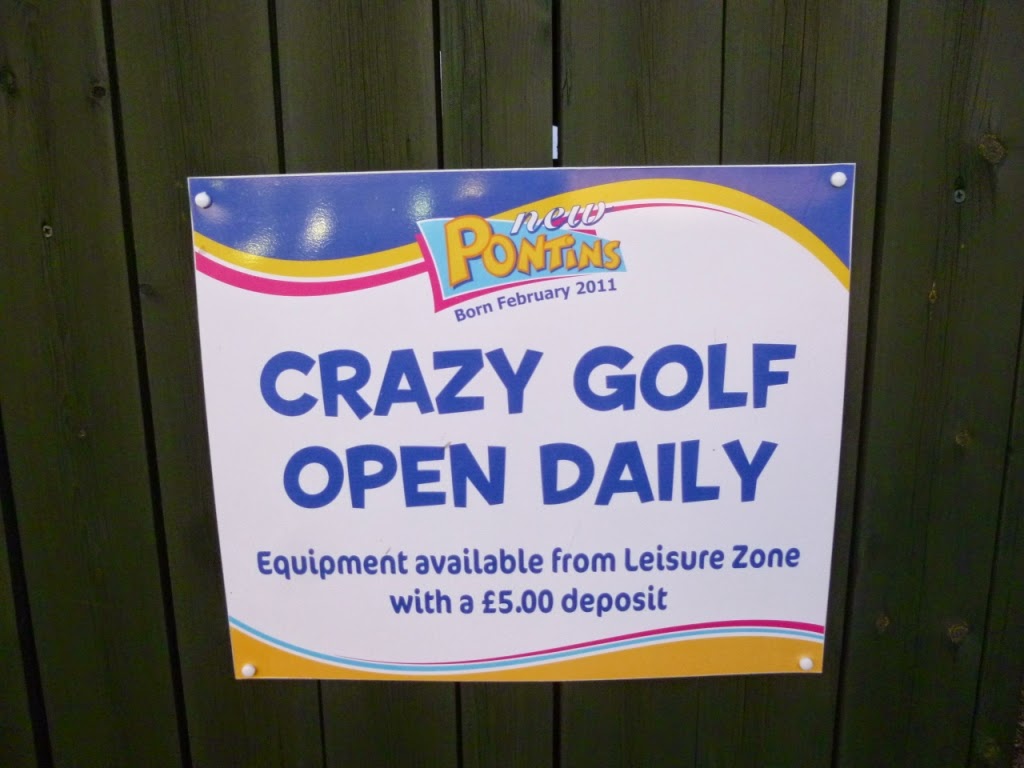 The course was the 582nd visited and 348th played on the Crazy World of Minigolf Tour since September 2006. 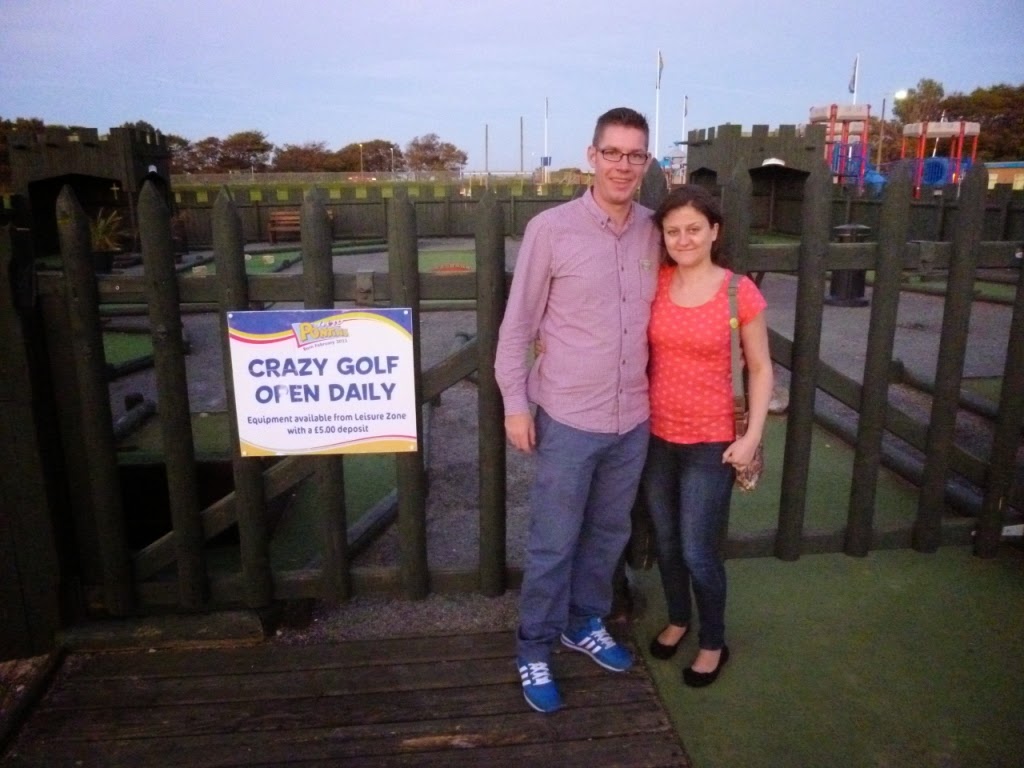 The layout is felt with wooden borders and some tricky obstacles and some incredibly tough second (and third) putts! 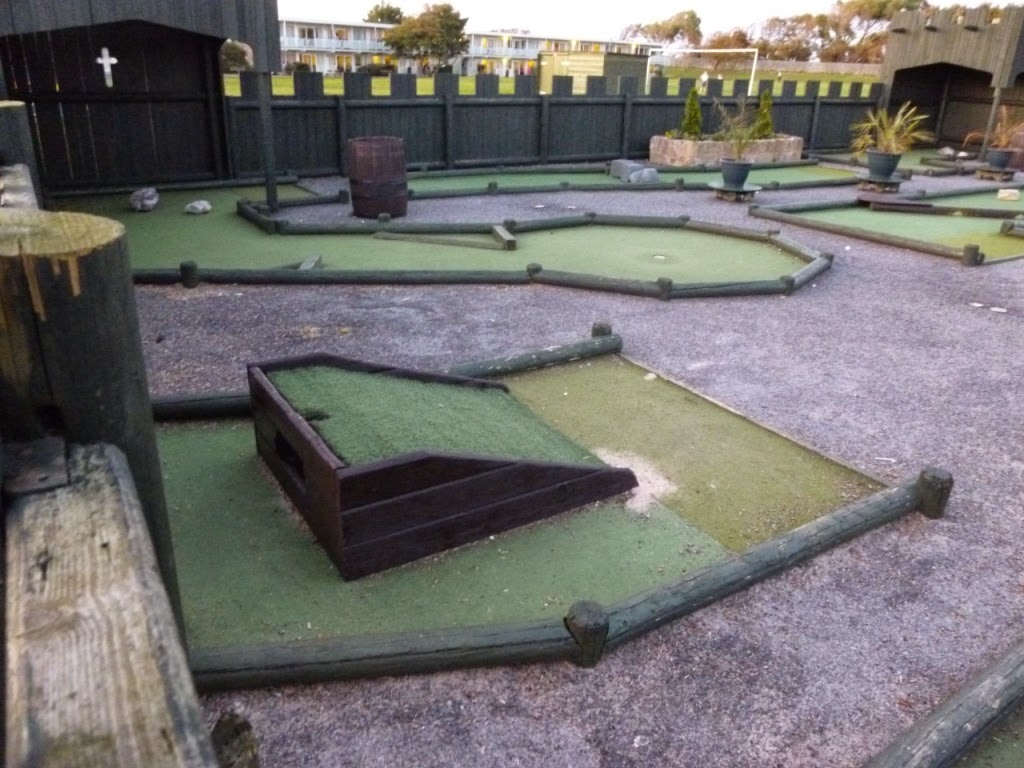 Set-out in a castle the course is well made and fits the space nicely. 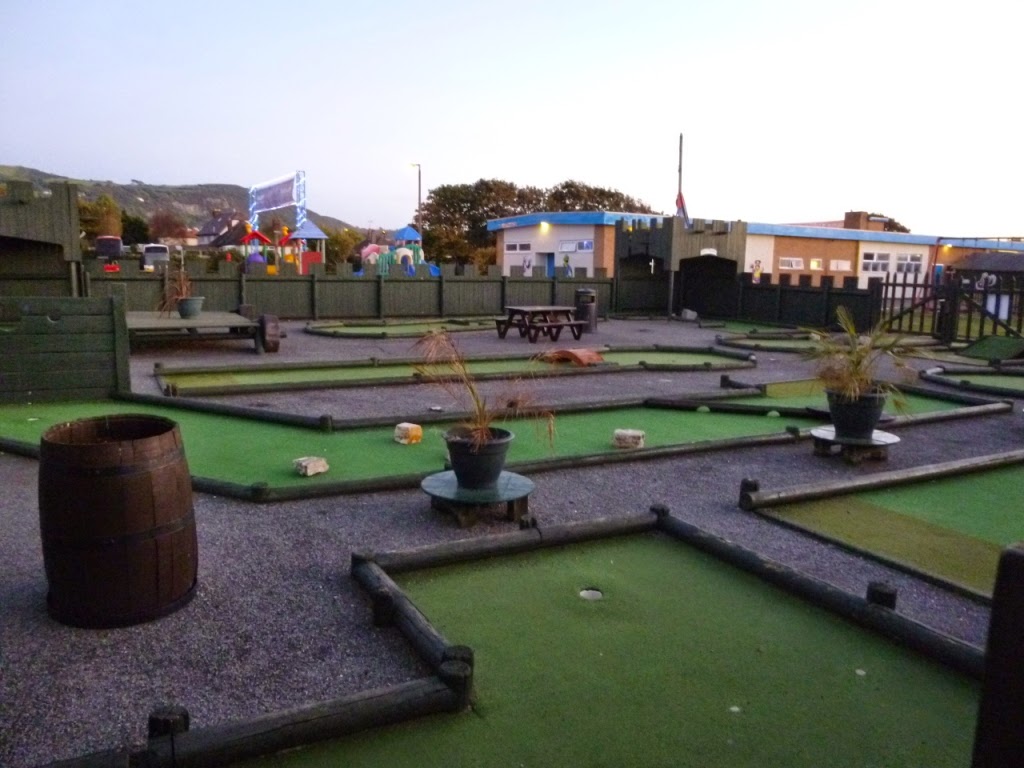 In our five-player semi-pro contest on the course Brad Shepherd stormed to victory with a cracking round of 18(par)! 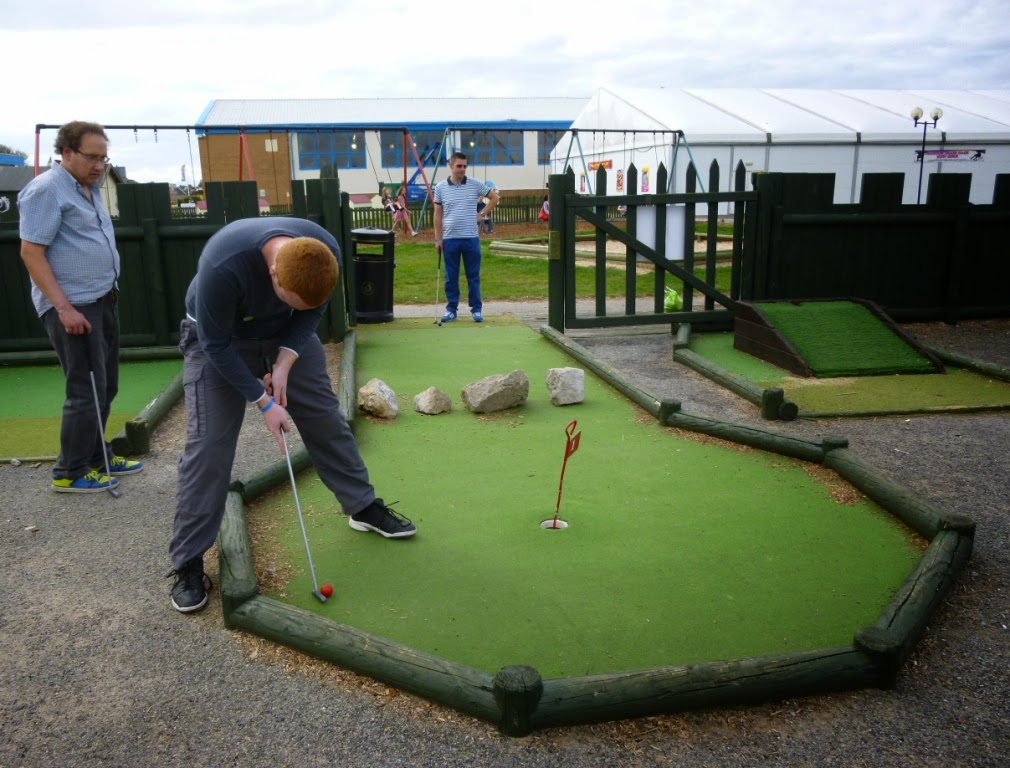 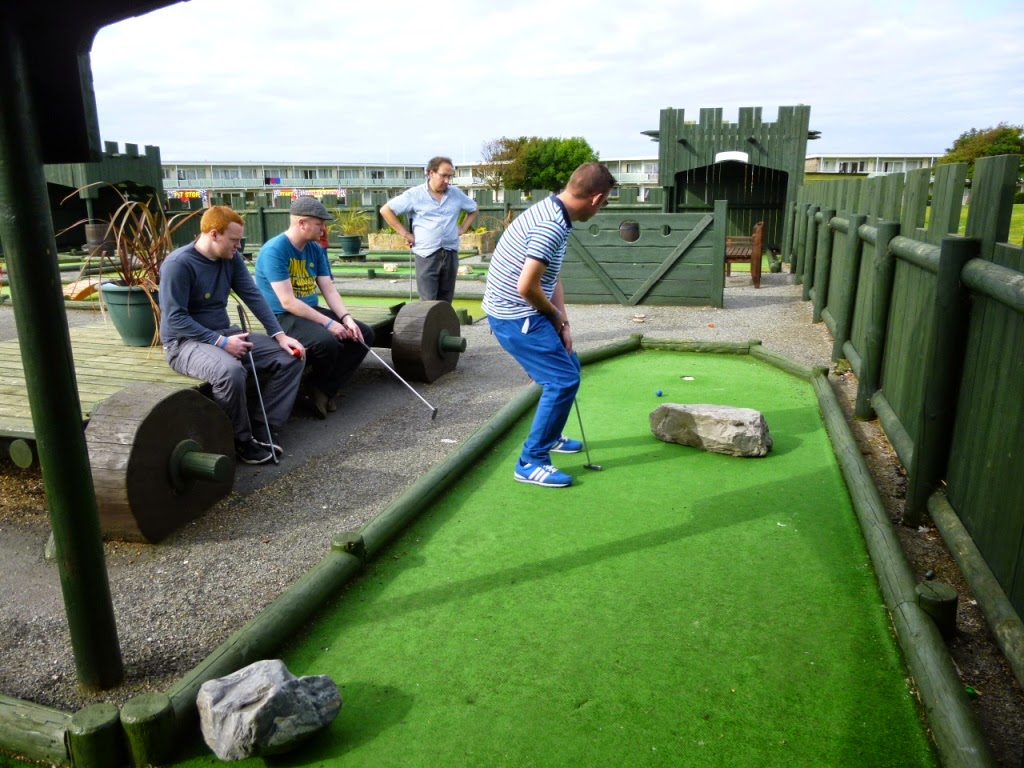 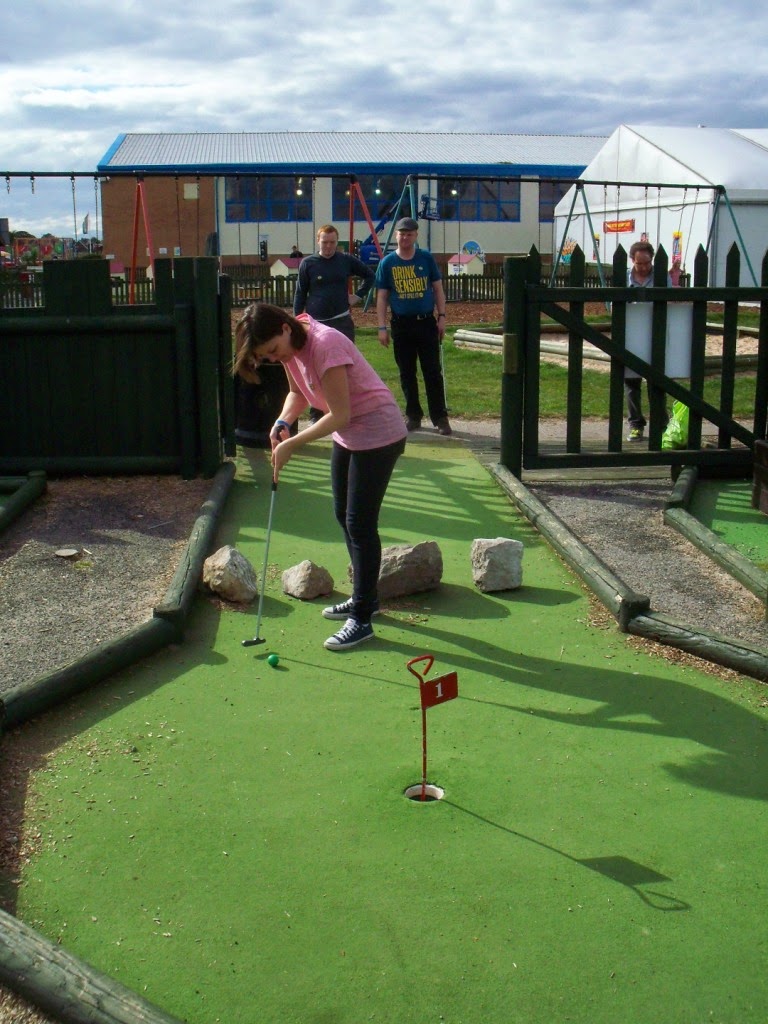 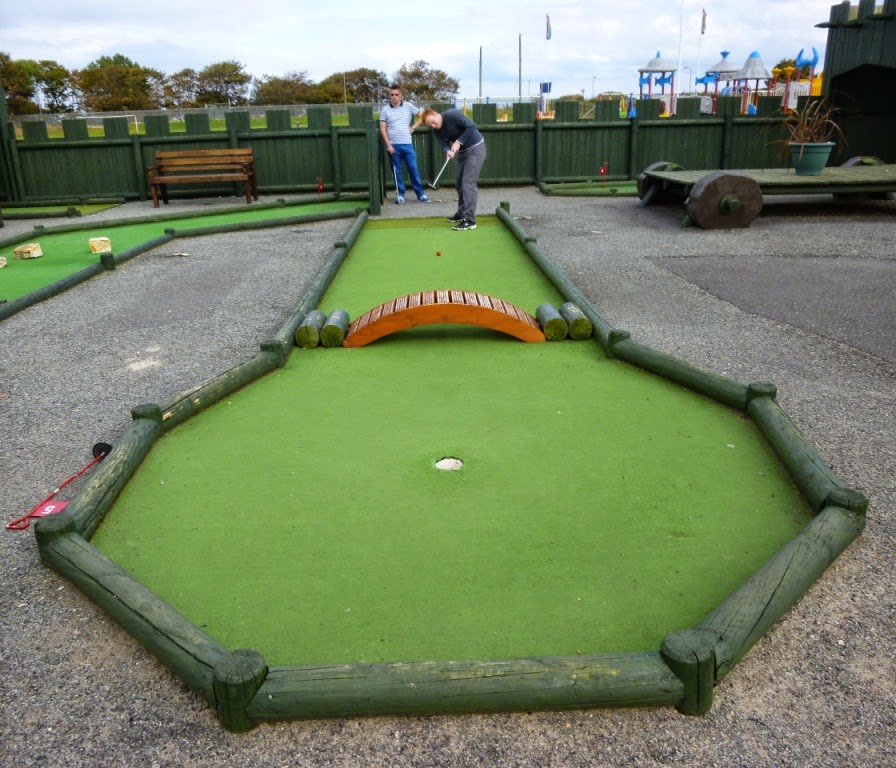 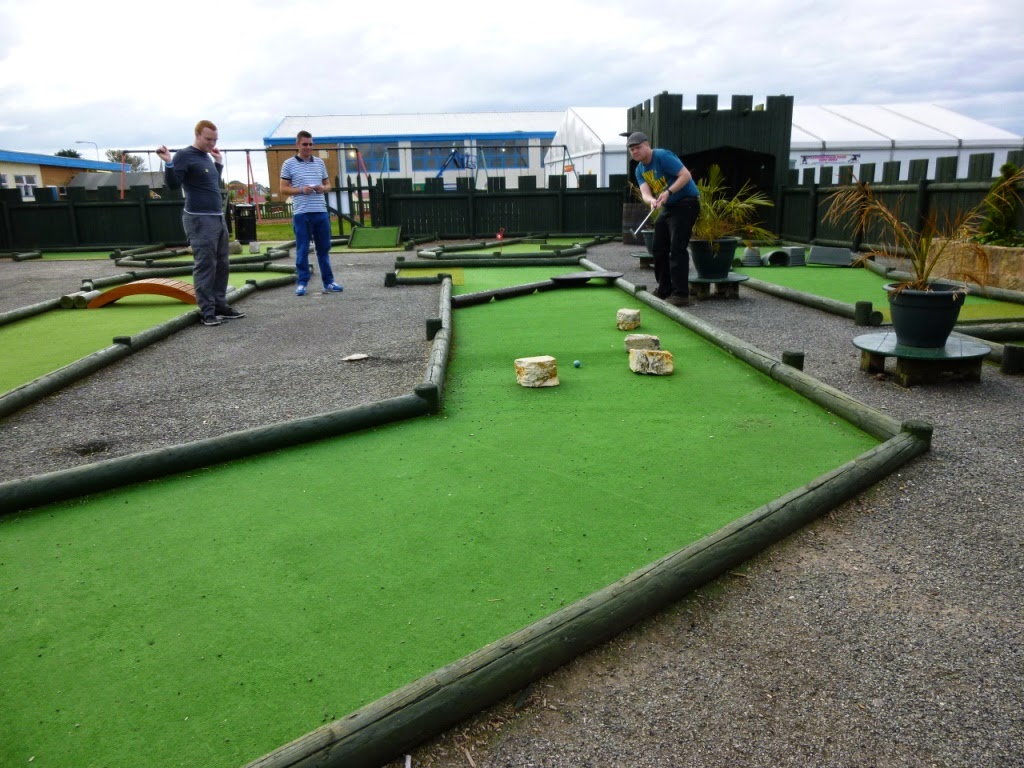 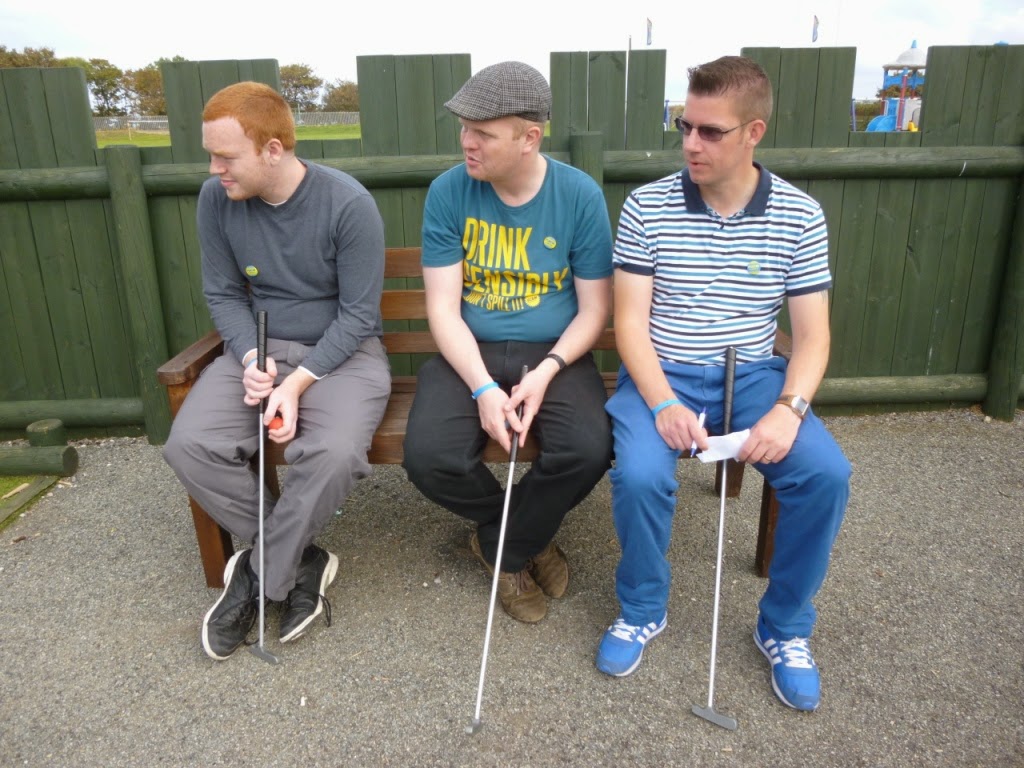 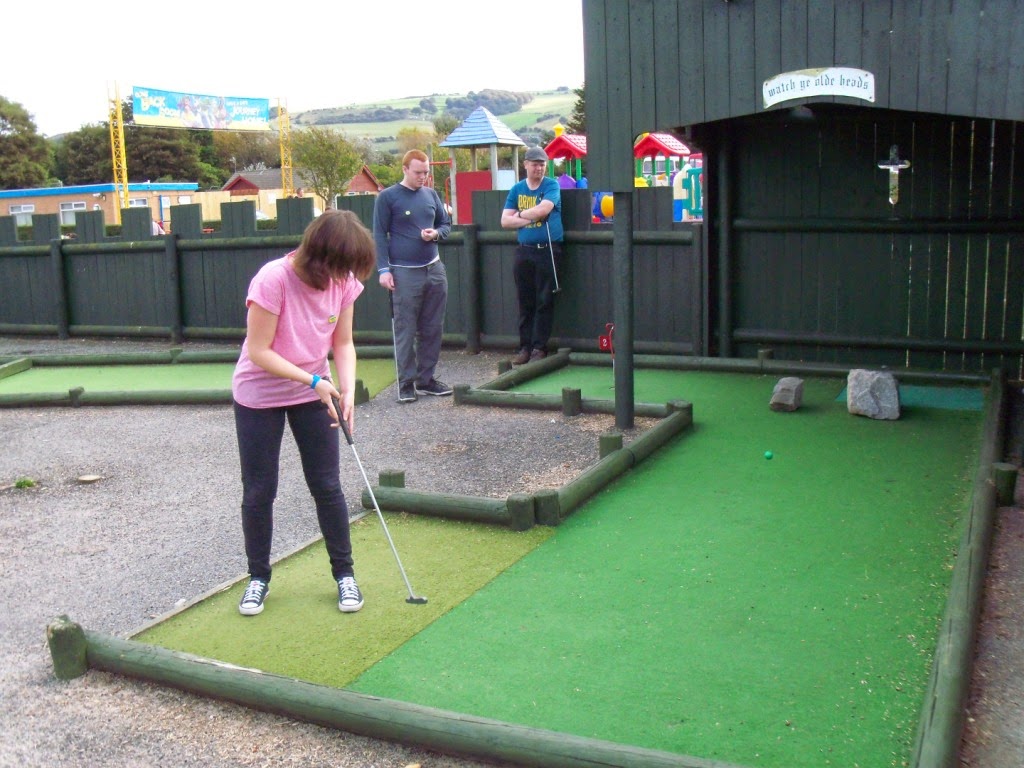 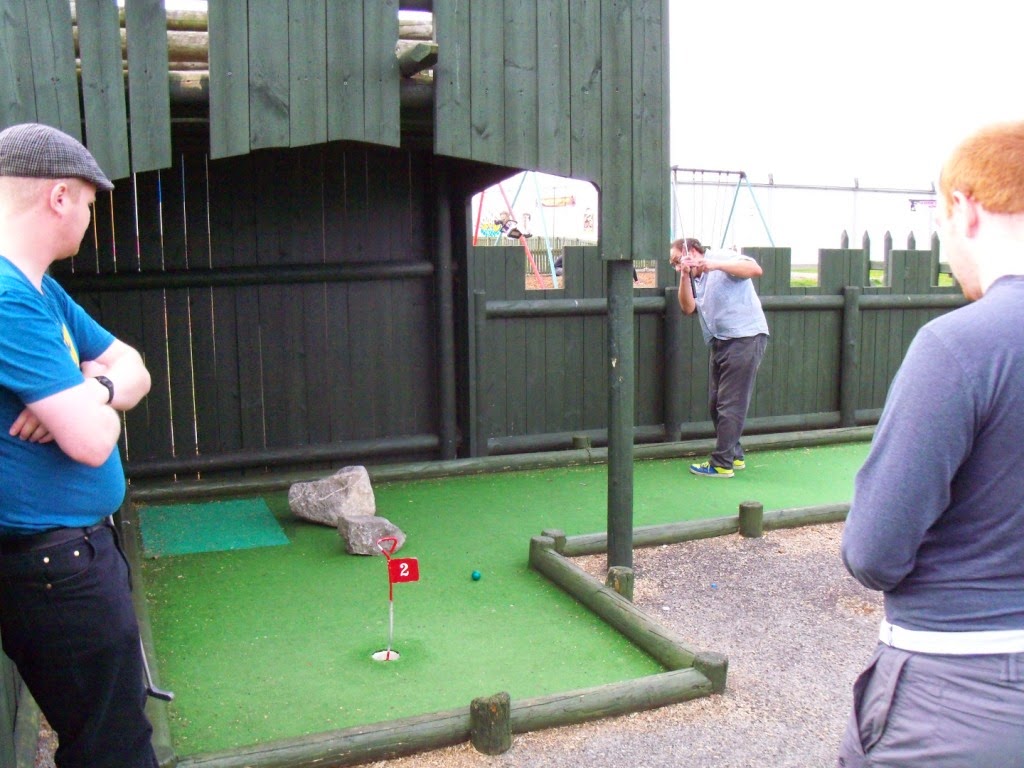 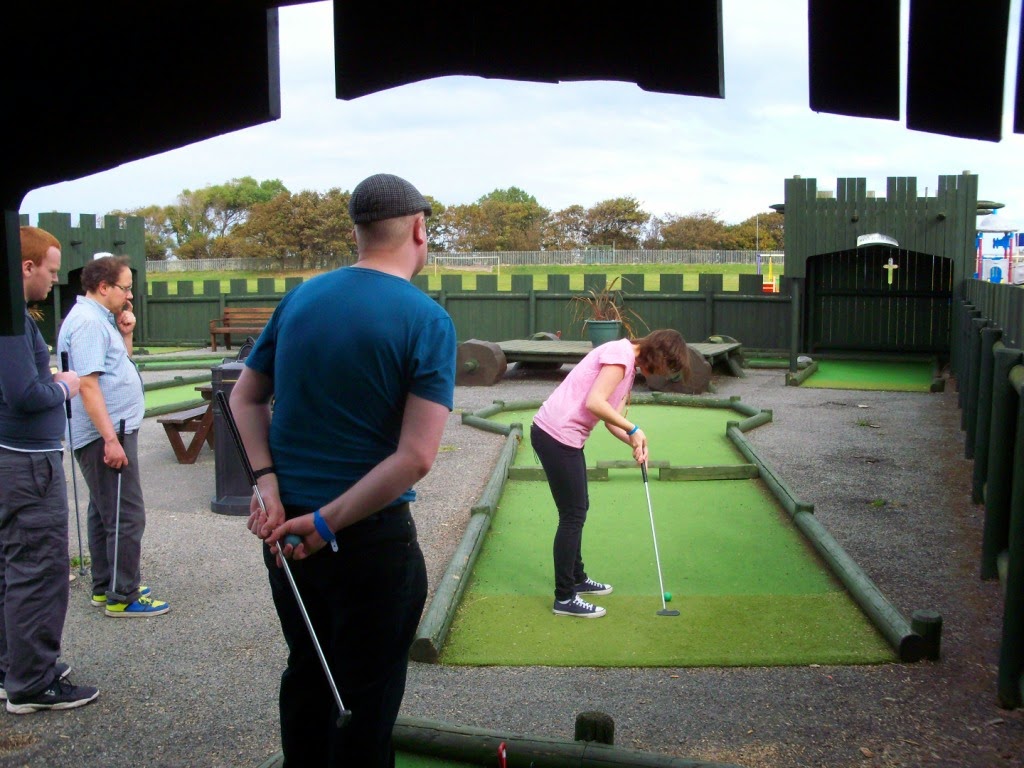 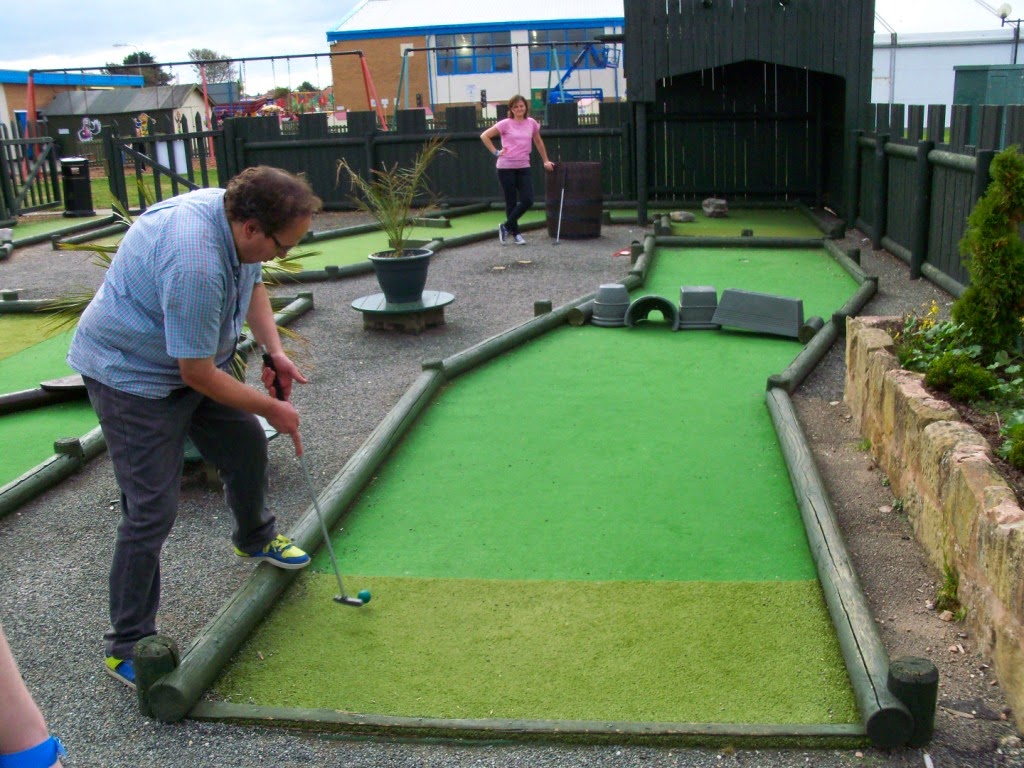 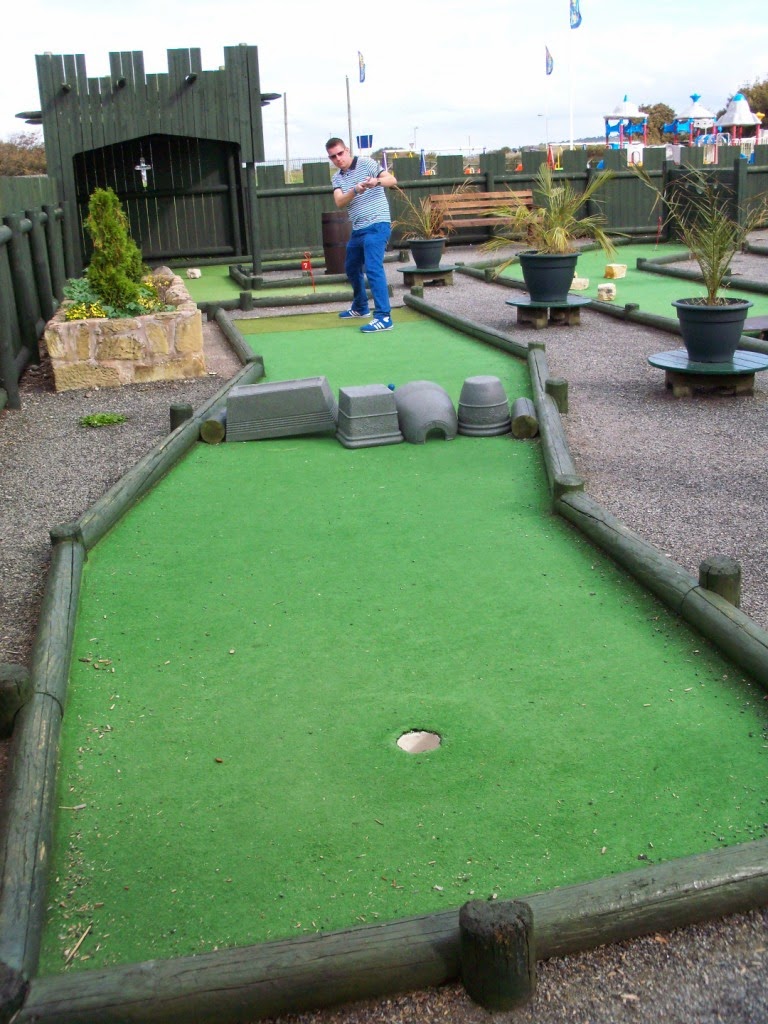 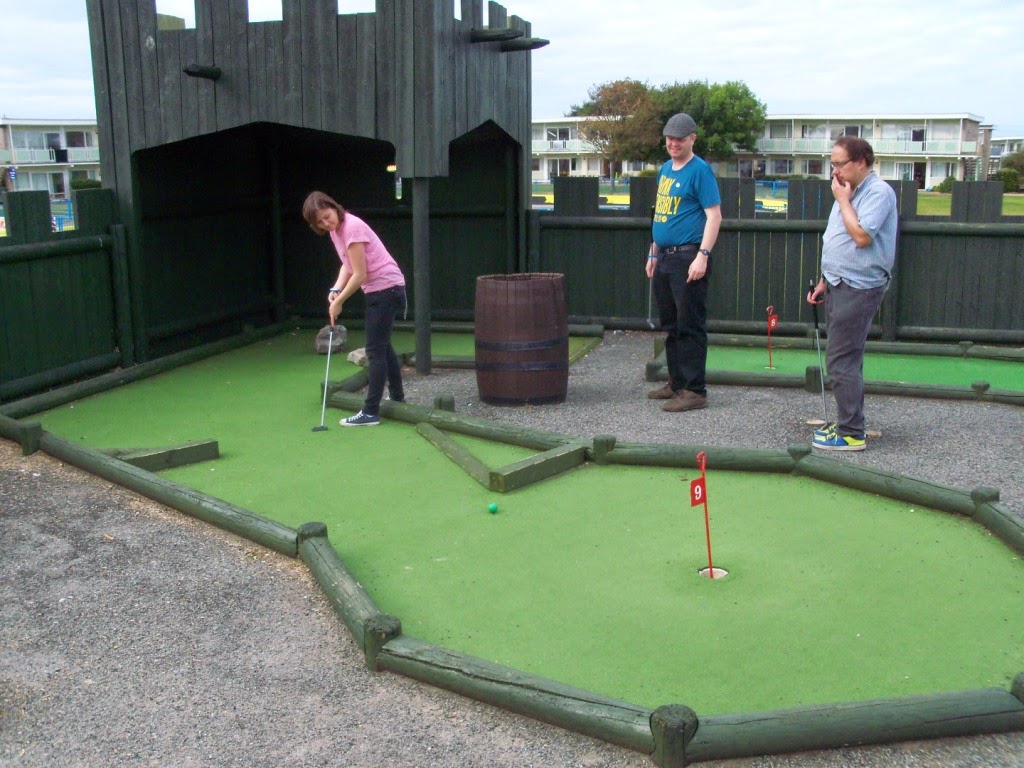 The course sits next to what was once the boating lake that can also be seen in the film. That's now been turned into a Kart Track.


Related blog posts:
- Crazy World of Minigolf Tour
- Holiday on the Buses Weekender at Pontin's 2014
- 'The Butler Cup' On the Buses Crazy Golf Tournament
- Wales
- Prestatyn
- On The Buses