While in Letchworth Garden City on Friday 30th of August I walked through the Garden Square Shopping Centre and noticed some red flags in the distance and was surprised and excited to see they were part of a Minigolf course set-up as part of the shopping centre’s ‘Letchworth Beside The Seaside’ event!

The 9-hole Swedish Felt type of Mini Golf had been in Letchworth for the week and would be closing at 5pm on the very day I happened to be there!

A round of Crazy Golf was a reasonable £2.50 to play so I headed out for a round with the gaze of the shoppers on me as I attempted to have a good round on the tough type of Miniature Golf course.

The layout was of the smaller, more portable type of Swedish Felt but still had some very tough obstacles and fiendishly small holes to putt into.

I started with some OK twos, but hit a four at the third. However I recovered and hit a nice ace on the seventh to a ripple of applause from some of the shoppers enjoying the lovely sunny day and taking a break on the benches near the course. I also aced the ninth to score a total of 20(+2).

The course was well laid out, with a nice consistent playing surface and with felt in very good condition. It was well worth a play and with a second round played on the same day half price it’s worth challenging yourself to beat your previous score. I tried, but failed to best my 20 and even though I started well with an ace on the first (a loop-di-loop obstacle – a nemesis of mine) I could only manage a 20 again, as I hit a three on the last.

I’m looking forward to playing the Mini Golf and Games course in future and it’ll be nice to have a challenge match against Emily on it.

The course was the 321st played on the Crazy World of Minigolf Tour since September 2006 and the 536th visited overall. Interestingly the 535th course visited was also a Swedish Felt variety and the last new course played was also fairly close to home as it was in Bedford.

Back on the 29th September 2007 I played a Putting Green course in Letchworth Garden City – it was the 38th course played on the Crazy World of Minigolf Tour – unfortunately it’s no longer there.

Not Playing Minigolf in Walton on the Naze

Rain Stops Play in Walton on the Naze, Essex.

On the 22nd of August Emily and I visited Walton on the Naze in Essex to play the Crazy Golf and Putting course in the town's Coronation Gardens in Bathhouse Meadow on Hall Lane.

Unfortunately, and following the theme of our Crazy World of Minigolf Tour over the last seven years, the courses were closed. To be fair the weather was rainy and it wasn't the best of days, but only we could visit a seaside resort in the height of summer and not play a Minigolf course!

We did have a good look at the 9-hole Crazy Golf course (it's a Swedish Felt variety of Miniature Golf) and the interesting looking 18-hole Putting course - it had some very thin lanes and greens that were raised at the back.

The pair of courses became the 534th and 535th courses visited in total on our Crazy World of Minigolf Tour. Hopefully one day we'll get to play the courses.

Back in May 2009 we visited Walton on the Naze and obviously missed the courses then!? We did however find and play the Hillbilly Shooting Shack on the pier and managed to visit and play a few of the other Essex Minigolf courses, including those at Dovercourt, Clacton on Sea (1 and 2) and Blake End, near Braintree.

Perils of the Seaside #1 - The Seagull

While enjoying a day out in the Essex seaside town of Walton on the Naze a MASSIVE Seagull came after me!

I wasn't even eating a bag of chips. 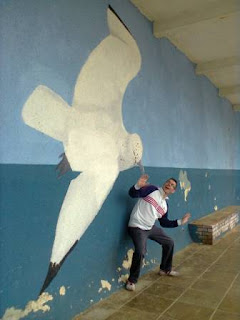 A Round of Minigolf on Felixstowe's Fantasia Adventure Golf Course

Re-visiting the 7th course on the Crazy World of Minigolf Tour at Fantasia Adventure Golf in Felixstowe, Suffolk. 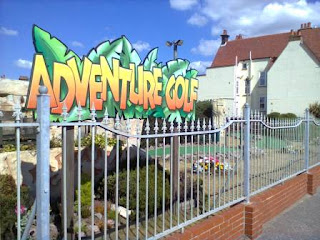 On the 20th of August Emily and I headed back to Felixstowe, Suffolk for a day out at the seaside.

On what was a lovely sunny day we wandered past the 9-hole Fantasia Adventure Golf course on Sea Road and saw that the coast was clear for a nice 'relaxed' game of Minigolf.

It's not often we're in Felixstowe in the summer, you're more likely to find us Putting away on the indoor Magical Golf course at Mannings Amusements just down the road, while it's raining/frosty/wintery outside.

The Fantasia Adventure Golf course was the 7th played on our Crazy World of Minigolf Tour way back on the 26th of August 2007!

In our one-round contest Emily quickly took the lead and also managed to ace the 4th hole! It's a tricky course to score holes-in-one on so it was a pleasing shot to see.

Unfortunately Emily came unstuck on the 8th and was terribly unfortunate to score a dreaded seven.

The Adventure Golf course is always worth a play and costs £2.50 for adults and £2.00 for children. It's in very good condition and has had some new tee-off spots put in place since our last visit.

Spotting another black pudding that is suitable for Coeliacs.

While shopping in Morrisons yesterday we spotted another brand of Black Pudding that is gluten free and suitable for Coeliacs - Clonakilty Black Pudding.

Looking forward to having it for breakfast :-)

2013 UK Rock Paper Scissors Championships to take place in London on the 23rd of November!

The date for the 2013 UK Rock Paper Scissors Championships has been announced! The big event will be taking place on Saturday 23rd of November.

Taking place at the Knights Templar Pub on Chancery Lane in London, the three hour UK Rock Paper Scissors Championships will see 250 competitors battle it out for the top prize of UK Champ, a trophy and £100 in prize money.

Emily and I have competed in a number of the Wacky Nation organised Rock Paper Scissors tournaments and always found them great fun. In the 2012 International Rock Paper Scissors Championships our team finished fourth, losing to Great Britain in the bronze medal match (we were San Marino).

The reigning and defending UK RPS champion is Amy Rowe, who became the first woman to win a title that had previously been dominated by men hailing from Woking!

You can find out more about the 2013 event on the UK Rock Paper Scissors Championships and Wacky Nation websites.

In early July we were back in Boscombe, Dorset for the first time in a few years. In 2009 we'd played the Boscombe Chine Gardens Mini Golf course at the BMGA British Doubles Championship.

At the time the course became the 108th course played on our Crazy World of Minigolf Tour.

In game one Emily took the victory 1-up. Game two saw Seth take a 3&2 win while the decider saw Seth edge a 1-up victory to take the series win and the CMGC Matchplay Championship title.

Local character Mick 'The Man' Gisbourne was also in residence at the Boscombe Chine Gardens course during the championship weekend and played against Emily and Seth in 'The Boscombe Jiggle' competition.

The Boscombe Mini Golf course is in a nice location and easily accessible (it's also a stop on the Bournemouth to Boscombe Land Train). Well worth a play if you're in the area.

Emily was third in the 2013 BMGA British Matchplay Championships and fellow Minigolfer Brad 'The Fist' Shepherd was keen to inspect her winnings after the competition!