Playing a Minigolf course 'sculpture' set-up for one-day only! 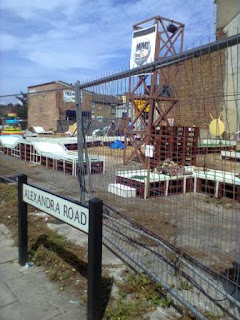 With nothing planned for Saturday 27th July I was looking forward to sitting down and not doing much at all. However, a couple of early morning tweets from Northamptonshire-based Cider & Perry Maker Mark Shirley alerted me to a Minigolf course that he'd spotted being set-up in Bedford! What’s more, it was only going to be in the town for one-day!!!

So, rather than lounging about I did a bit of research and found out the M!MS Empire Sunset Nine Hole Mini Golf course would be open from 3pm until 11pm.

The M!MS art collective is based in Bedfordshire, with M!MS standing for “Maximum Irony! Maximum Sincerity".

I arrived in Bedford at around 1.30pm which gave me a chance to see the final preparations and site-clearing being done before the course opened for play.

The course looked brilliant and was a great use of a long vacant plot of land in the town’s Midland Road.

The idea came from artist Andy Holden who designed (and with the help of the M!MS team) built the ‘playable sculpture’ using simple and cheap materials to create the innovative and very playable course.

Photos of the course.

I played two rounds, shooting a 19 followed by an 18 in a match against Andy (who scored a 30). After the course had closed forever I was told that my round of 18 was the best of the day – a course record that will stand for the ages!

The course not only looked interesting, but it played incredibly well – even more impressive considering it was mostly made out of old pallets! The mix of easy, hard and fun hole designs meant there were some great hole-in-one opportunities, as well as some testing obstacles and second putts.

The course harked back to 1920’s depression era USA when vacant lots were often turned into improvised Miniature Golf courses.

The M!MS Mini Golf layout, aka Mini Sculpture Golf, was the 533rd course visited on the Crazy World of Minigolf Tour and the 320th played since September 2006.

Andy Holden and the M!MS team will be showcasing their work – Towards a Complete History of M!MS – at the Zabludowicz Collection in London from the 26th of September to the 15th of December 2013. I’m looking forward to seeing the final collection and film. All of the M!MS events are filmed and by attending them you become part of the work!

Earlier this year I played a one-day only art installation Miniature Golf course in Bedford. The course was designed and built by Andy Holden and the M!MS art collective as part of their manifesto.

The 9-hole sculpture was very playable and great fun.

Now, the "Maximum Irony! Maximum Sincerity, 1999-2003: Towards a Unified Thoery of MI!MS" exhibition is on display at the Zabludowicz Collection in London and is open until the 12th of December 2013. Do head along to have a look.

If you watch screen three long enough you'll see the M!MS Empire Sunset Nine Hole Mini Golf course in action, along with hearing me talking to Andy about the Crazy World of Minigolf Tour!

Find out more about Andy Holden and the Maximum Irony! Maximum Sincerity (M!MS) art group on Andy's website and the current exhibition on the Zabludowicz Collection website.