Visiting the 532nd course on the Crazy World of Minigolf Tour.

On Friday 19th of July Emily and I headed north to the town of Barnard Castle – home to a brand new UrbanCrazy Mini Golf course!

The 9-hole layout is a great design, with some excellent hole-in-one opportunities and very good fun to play.

The course is located at Scar Top, Barnard Castle in County Durham and replaced the old course that had been in place since 1985. The course has been dedicated in memory of Alan Wilkinson who passed away earlier this year. He was a noted historian of the town and first introduced Minigolf to Scar Top. One of the stones laid at the course carries a dedication to him. A very nice touch. 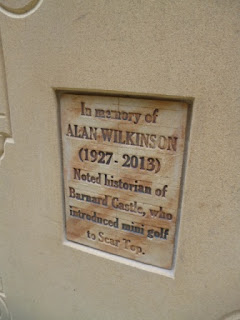 The new course has been named “A Journey Through Teesdale” and each of the nine holes is themed on local landmarks or local places of interest, such as the nearby Bowes Museum and the castle itself. 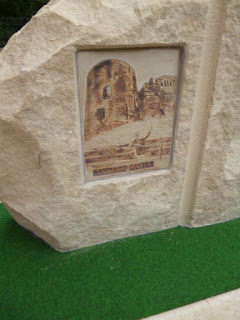 The course was the 532nd visited on the Crazy World of Minigolf Tour and the 319th played.

In our first round on the course I managed to beat Emily by one-shot 20 to 21. In our rematch in the afternoon I shot a 16 to Emily’s 18.

Along with fellow British Minigolf Association Tour members and Great Britain Minigolf Sport Team members we took on locals in challenge matches, did some coaching and also competed and coached in the first-ever ‘Inter-Mayoral Minigolf Challenge’ charity competition held to support Teesdale YMCA.

The results of the two-round UrbanCrazy Barnard Castle Minigolf Challenge competition were: 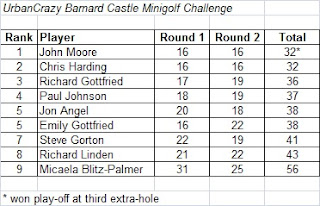 It’s a great layout and a great test of putting skill. A course record was set at 16(-2) by John Moore on the day, with the round equalled by me, Emily and Chris Harding throughout the day. If you play the course and do better do let me know by leaving a comment below.

Read all about the course’s design and build on the UrbanCrazy website and check out the Barnard Castle web page on the course.