A revisit to the miniature golf courses in Littlehampton.

While in West Sussex for the Splash Point Open minigolf tournament at the course in Worthing we stayed over in East Preston so that we could revisit nearby Littlehampton.


I first visited the seaside resort in 2012 when I found all of the courses to be closed, while on a revisit in 2014 we managed to play Pit-Pat at Western Putting on Banjo Road and the Sharksville Adventure Golf course at Harbour Park.

On Saturday 25th July we managed to play the Adventure Golf course at Norfolk Gardens. The holes there are MASSIVE!


The course became the 381st played on our Crazy World of Minigolf Tour and we've now visited 661 in total. Check out the photos below to see some of the interesting holes. 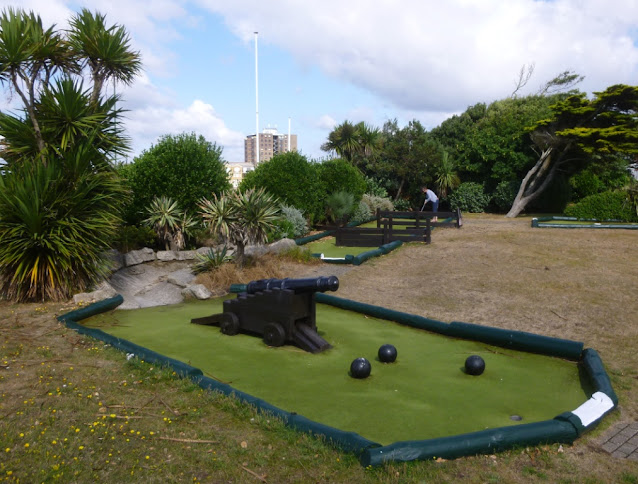 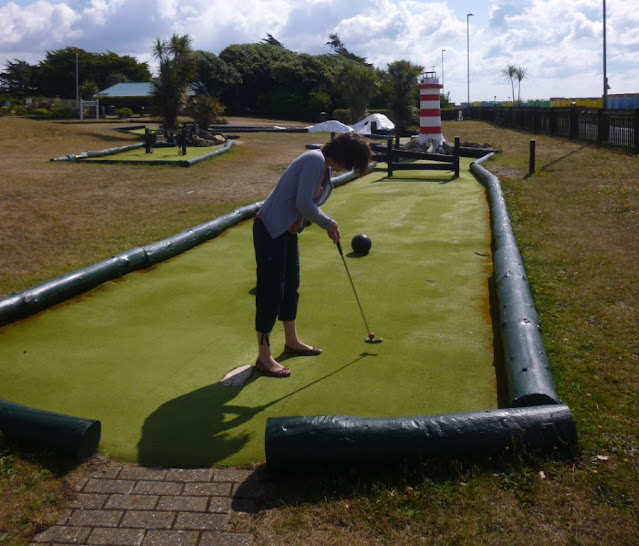 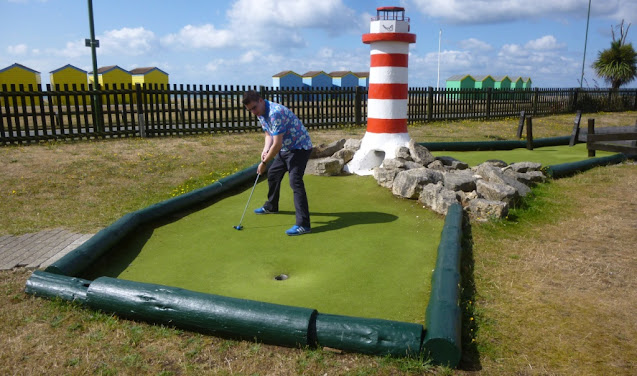 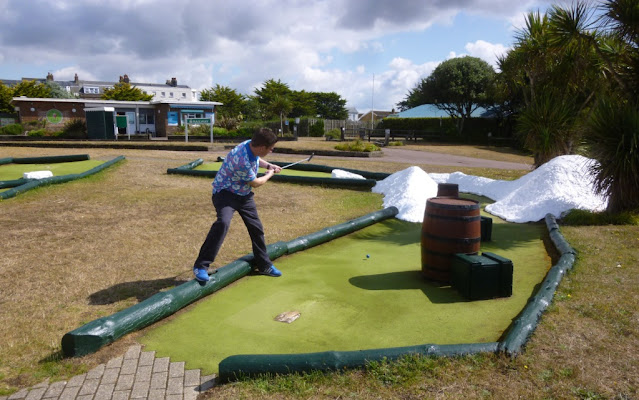 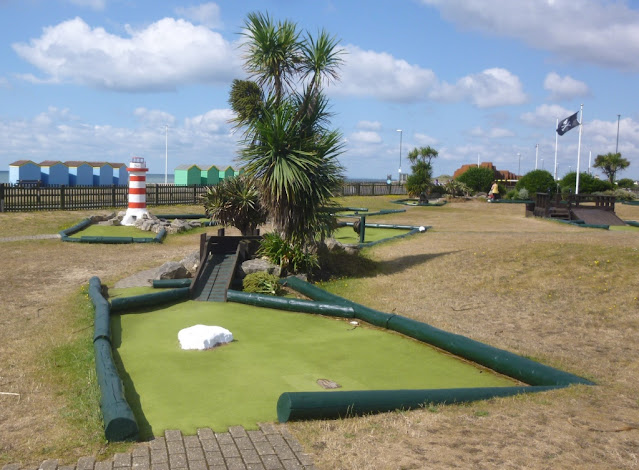 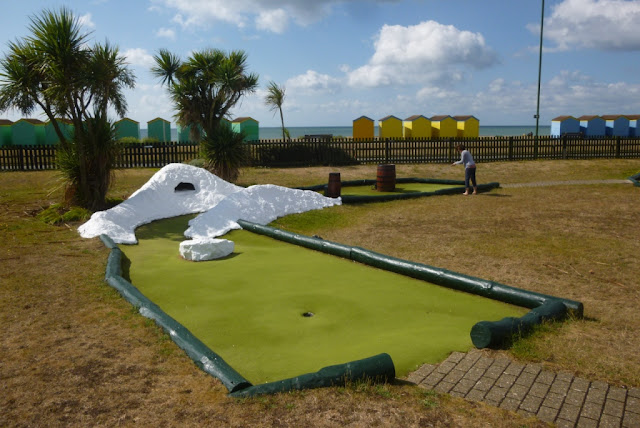 Looking back through our tour records I noticed that the Littlehampton course is very similar in design and build to the Adventure Golf course in Scarborough - 55th course we played.


Hopefully on our next visit we'll have more time, and better weather, so we can get to play the Swedish Felt Crazy Golf and grass Putting courses there.

There's also a Pitch & Putt course at Norfolk Gardens. And a Miniature Railway!

Many of the minigolf courses and leisure facilities in Littlehampton (and nearby Bognor Regis) are operated by Inspire Leisure. We've always found them in good condition and received very good service. Check out the Inspire Leisure website for more info.

A revisit to the Splash Point Mini Golf course in Worthing.

On Saturday 25th July 2015 we revisited sunny Worthing in West Sussex to compete in the Splash Point Open tournament held on the 18-hole Splash Point Mini Golf course just off the seafront at the town's Denton Gardens.


Back in 2010 the course became the 181st visited on the Crazy World of Minigolf Tour and we've returned a number of times since then for both competitions and fun rounds.

Since the course opened in 2010 it's been a great addition to the seaside resort. Over the years the owners Anthony and Peter have added some classic Crazy Golf obstacles including a windmill and loop-di-loop, as well as keeping the layout very well maintained.


Miniature Golf has been played in Denton Gardens since the 1920's and it's a great location for a game. Check out the Splash Point Mini Golf website, Twitter and Facebook for opening times, prices and further info. 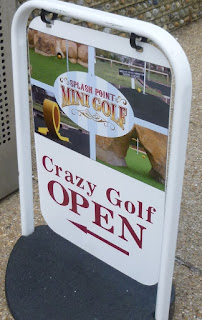 Splash Point Mini Golf is one of the few courses that has it's own postcard - in fact it has two! 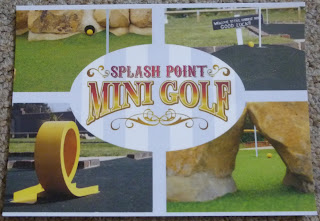 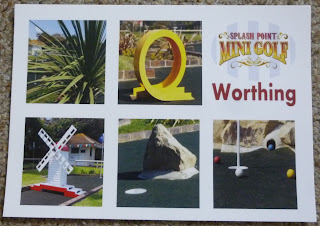 The scorecard/loyalty card is smashing too. 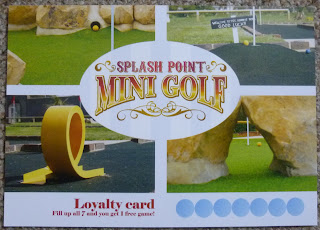 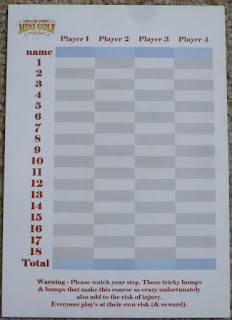 
The tournament was won by Oxford’s Michael Smith who defeated Hove’s Peter Emmerson in a sudden-death play-off after both players had scored totals of 100.

Richard said “I always enjoy visiting Worthing and Splash Point Mini Golf, even though it’s an incredibly tough course. After the terrible start to my second round I was pleased to shoot par on my final round.”

Emily said “Splash Point Mini Golf is a great course to play, with some very ace-able holes, but some which can be killers. I managed to go from one extreme to another, with a lot of holes-in-one, but some really bad hole scores as well. I let myself down on the final round but was happy with my first two rounds.”
Posted by Richard Gottfried at Sunday, July 26, 2015 No comments:

A revisit to the Adventure Golf course in Warwick's St Nicholas Park.


The 18-hole Adventure Golf course at St Nicholas Park in Warwick was the 27th course played on our Crazy World of Minigolf Tour way back in July 2007 when we were in town for that year's BMGA English Open tournament.

We revisited the layout in April 2011 and this month Emily gave the course another play while on holiday in the midlands on the 17th of July.


Designed by UrbanCrazy the course is very tricky indeed and well worth a play.


For more information on the course, opening times and prices visit the Golden Putter website.

A revisit to Stratford-upon-Avon's minigolf course.


While on holiday in the midlands this week Emily made a return trip to Stratford-upon-Avon and the 18-hole Minigolf course at the Recreation Ground on Swan's Nest Lane.

The course was originally the 49th visited and played on our Crazy World of Minigolf Tour back in 2008. We've visited the course to play in a number of competitions including the British Doubles, Midlands Open, Midlands Invitational and the English Open. It's one of the finest courses in the country and a real skill-based course. Well worth a visit.


The course was recently the setting for the MMGC Midlands Masters tournament organised by the Midlands Minigolf Club - the reigning, and two-time, BMGA British Club Champions.

Along with my MMGC team-mates Chris Harding, John Moore and Jam Trubridge the club won the national title for the first time when the Stratford course hosted the event in 2008.

Check out the links to videos from the closing stages of a 'friendly' Minigolf Doubles Match between me & Kevin Moseley and Jam Trubridge & Peter Jones played after the 2009 Midlands Invitational Tournament.

A visit to our 600th minigolf course in the UK! 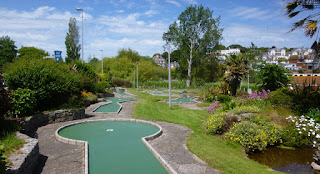 
The courses is known as Quaywest Crazy Golf and from the scorecard is operated by Goodtime Leisure. It certainly lived up to its name as we had a good time playing the course and a pleasant and leisurely round of Crazy Golf.


The course became the 370th played since our tour began on the 30th September 2006 and was the seventh played on our tour of the South West of England.


A round of Crazy Golf on the layout costs £4 for adults and in our match-up I won with a score of 39 to Emily's 42. It was very pleasing for us both to score aces on the 17th hole.


While having a wander around Paignton it was great to see the course on a postcard - and you could get 12 for £1! I had to buy some for my collection and to post out.

Overall the 600th course visited on our tour was on Sunday 31st May at the Jurassic Golf course at Santa-Fe Adventure Park in Swanage, Dorset.

Visiting and playing miniature golf courses came about from our love of travelling around the UK. We began going to different seasides when we got our first car in 2006 and after a trip to Southsea, Hampshire we found the MiniatureGolfer website where there were around 600 minigolf courses listed around the UK. Since then we've tried to play as many as we can.