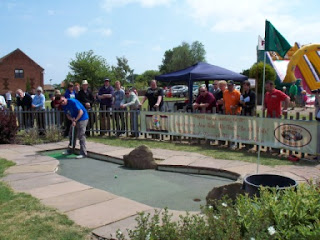 Photo: Richard plays the 18th hole in front of the crowd at Wroxham Barns 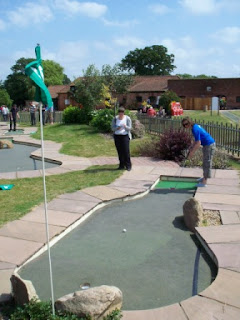 The tournament was won by Oxford’s Michael Smith with a score of 90(-18).

Richard said “The English Open was a great event and I’m pleased with seventh place. I hit an all-time new personal best in my first round and I had 13 Aces overall. It was also great to do well on the round-killer twelfth hole which has been a problem for me in the past. A weekend with two top ten finishes is a great result.”

Richard & Emily were representing The Putter King indoor miniature golf course franchise (based in Japan) at the 2011 BMGA English Open. 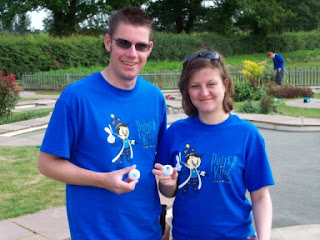 Prior to the BMGA English Open, Richard & Emily were also in action at the Lost World Adventure Golf Pro-Am Classic minigolf competition in Hemsby, Norfolk on Saturday 4th June - Results.

Next up for Richard and Emily is a trip to Stockholm, Sweden to play for the Great Britain Minigolf Team at the WMF Nations Cup.

To sponsor Richard and/or Emily Gottfried in future Minigolf tournaments please get in touch.
Posted by Richard Gottfried at Monday, June 06, 2011