A look at minigolf and competitive socialising in the time of coronavirus and social distancing.


I've been blogging about the world of minigolf since 2006 and have seen how the game boomed in the last decade.

The coronavirus pandemic has thrown a spanner in the works into the whole world and as such minigolf courses and competitive socialising venues have taken a hit.

I recently took a look at 'The next normal rules of minigolf' with a dive into how minigolf will be played after lockdown. 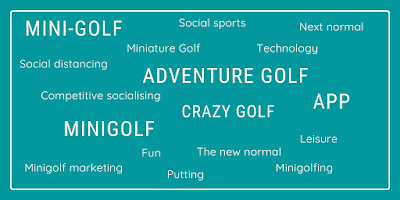 
I've collated a number of blog posts from recent months, looking at the rise of competitive socialising, tenpin bowling and minigolf combinations, minigolf in a retail setting, technological innovations through minigolf scoring and loyalty apps, as well as the popularity of mixing art and minigolf.

These pre-pandemic posts are joined by the posts I've written about minigolf, competitive socialising and competitive isolation during the time of Covid-19.

Artainment and the world of minigolf - A look at how minigolf has been used in artistic creations.

During the time of Covid-19

Keeping minigolf rolling - Prior to the coronavirus pandemic the minigolf and wider competitive socialising sectors were booming. Something we're very keen to continue once the world gets back to a semblance of normality.

The Big Mini Golf Bucket List - Ideas to while away the hours, days, weeks and months of lockdown.

Competitive socialising in isolation - Keeping social and competitive in the new world of physical distancing.

The next normal rules of minigolf - A look at how minigolf will be played after lockdown.

There are also a number of Putt at Home events taking place around the world and it's been brilliant to see how popular home and garden minigolf has been during lockdown.

We saw social distancing measures in place at a miniature golf course in person for the first time today.

It was at Bruntwood Pitch & Putt in Bruntwood Park, Cheadle, Stockport.