Keeping social and competitive in the new world of physical distancing. 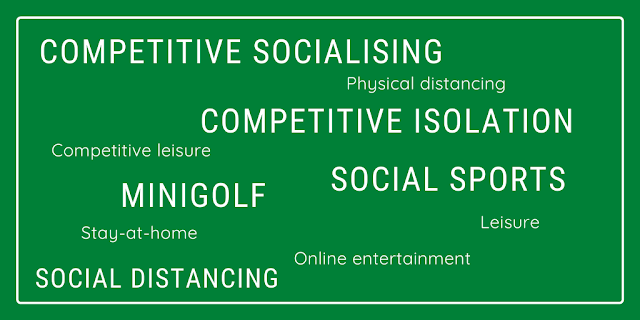 I've been thinking a lot about what'll happen post-pandemic, where I want to visit and what I want to do when things begin to 'return to normal'. My bucket list of places to go is filling up fast.


What that 'normal' looks like is certainly up for debate. I think it'll take a while before we're able to go about our daily lives as carefree as most of us were lucky enough to be as before coronavirus struck.


That said the changes we will need to make to how we live our lives will include some positives.

While we've been at home and practicing safe social distancing we've found a number of ways to stay social and have fun.

Admittedly I'm still spending a bit too much time on social media and will look to cut this down. I need to read more books, watch more films and play video-games, rather than scrolling through Twitter, Facebook, Instagram and LinkedIn where you can quite easily be bombarded with bad news.

Like many people we're using apps and platforms in different ways and I've had more video calls with friends, family and colleagues than ever before. Why didn't we use video chat more before coronavirus? Surely this was one of the attractive advancements of the future promised to us by sci-fi films and TV back in the 80s and 90s, as well as being heralded as something we'd all be doing by the presenters on Tomorrow's World.

I suppose we don't readily break out of our routines or comfort zones unless we're really pushed, something the current situation has forced upon us.


Before the pandemic hit the phrase 'competitive socialising' had become a popular way to describe going out, with lots of new operators catering to the demand of a public who wanted to compete at something while eating and drinking in a nice setting.

Whether it was table tennis, darts, shuffleboard, bingo, tenpin bowling, arcade games, or my personal favourite minigolf, people were finding new ways to quench their thirst, have fun and compete without signing-up to a full sports league or taking things too seriously. But we all know you have to take competitive socialising seriously – right?

'Competitive socialising' may, for the time being at least, have been replaced on everybody's lips by 'social distancing'. But when we're able to safely emerge from isolation there will be an appetite for playing games, having fun and doing new things.

Some of those experiences may not actually be totally new though, as people will want to tap in to the things they enjoyed, or were good at before lockdown.

My interest in minigolf comes partly from the memories of playing the game as a kid, as well as the fun I've had travelling the world to visit new courses and compete in tournaments with Emily. I also enjoy the aesthetics, design and architecture of courses. Seeing the rise in popularity, innovations in the sector, and the development of the game has been brilliant too.

Competitive socialising wasn't a new thing. It was a new way to describe something humans have done for hundreds, if not thousands, of years. While many of the sports and games we enjoy were codified in the last 150 years or so, people have been competing against one another – for honour, pride, money and bragging rights – for centuries.

A new way of doing things


Competitive socialising hasn't gone away. But the pandemic has certainly changed how we enact it.

Over the last few weeks I have seen how quickly people and businesses have adapted to cater for that need we have to fill our down time and have fun.

Our regular pub quiz at the Micker Brook in Cheadle Hulme is now online, with participants from the pub taking part in regular Zoom conference calls while using the SpeedQuizzing App as our team answer sheet. Our excellent host Mike Prince runs a number of quiz nights at pubs around Greater Manchester. The lockdown has meant we've been part of ‘pub’ quizzes we wouldn't normally have participated in, as the teams from across all five pubs are now playing together up to three nights a week all whilst enjoying some friendly rivalry.

I've also seen a number of friends on Facebook hosting regular quiz nights and drawing in people who may not previously have been able to take part, had the event taken place down the pub.

On the minigolf side of things our friends at The Putting Penguin were quick to organise the Putting Penguin Pandemic Putt Off online – a stay-at-home putting competition with entries being submitted from around the world.

Similarly Tom and Robin at A Couple of Putts in the US have been sharing all the examples of putting at home on their Instagram story to illustrate the fun to be had.

One of those competitions in the USA is the Home Mini Golf Challenge organised by the team at Cool Crest Miniature Golf in San Antonio, Texas.

Another was the At Home Challenge organised by Fun Fore All Family Fun Park in Cranberry Township, Pennsylvania where customers were invited to design their own versions of attractions and rides from the fun park.

Here in the UK Plonk Golf have put together a Plonk at Home package for people young and old to encourage home minigolfing fun and also to raise money for charity.

Before the lockdown Roxy Ball Room had started work on their new location in Manchester, which will be a local venue for us. As well as an online Roxy Isolation Pong game the brand has launched a competition on Instagram where a lucky winner will receive a party for 50 people at their local venue when this is all over.

Emily and I have put together a Big Mini Golf Bucket List with 12 activities you can ticket off while in lockdown as well as a few ideas for what to do when allowed back outside.

In the world of dodgeball the sport's governing body British Dodgeball have been sharing lesson plans for younger players and sharing video challenges on social media. While the Manchester Bees Dodgeball Club issued a Loo Roll Challenge to other clubs.

These have all been great ways to combat the impact of social distancing and isolation.


Social distancing is a bit of a misnomer if you think about it, as the end result from the actions we take is to limit physical contact and proximity to others, rather than being anti-social. I've certainly been social, and seen a lot more social interaction, albeit online, in the last few weeks. We've got a lot more planned in case the weeks spent indoors with limited outside activity turn to months.

A better term for what we're seeing and experiencing is 'competitive isolation'. Yes, we're indoors and cut-off from friends, family and colleagues for a long time. But ingenuity and the desire to have fun, interact and compete is still there.

I'm a big fan of darts and love playing and watching the game whenever I get the chance. Last night the Professional Darts Corporation held the first-ever Darts From Home event, with a five-player round-robin tournament won by South Africa's Devon Petersen. From the positive feedback and enthusiasm from fans this looks to be the first of many home-based pro darts events streamed online.

Speaking of streams, last week saw The Stockport Show launched online, with a daily broadcast on Facebook and YouTube. The aim is to help combat loneliness and isolation as well as bringing the community together and have fun.

I found out about this show after seeing a retweet about a Battle of the Borough. This online vote has been organised to get some community spirit, local rivalry and fun going in lieu of any sporting action. The tournament bracket and the areas of the borough competing certainly caused some interest when they were announced on Twitter on Tuesday evening.

As I said following the first online pub quiz after lockdown "It was superb. A brilliant way to beat social isolation during social distancing through competitive socialising using technology."

What are you doing to beat the isolation blues? Have you taken part in any competitive socialising online during the lockdown? Do let me know.

While a lot of the minigolf world is out of action, plans are still being drawn up for new courses, work is ongoing to finish courses where permissible, and ideas formulated for when it's safe to get back out on the course. If you'd like to have a chat about competitive socialising, minigolf, marketing, or minigolf marketing do get in touch.

Here are some of our thoughts...as self-isolation becomes the new norm, many of our competitive socialising projects have been put on hold, however, we expect their progress to bounce back once things get back to normal. We anticipate that people will be extra-hungry for fun experiences that bring everyone together!

We think it's fantastic that brands are thinking up ways for people to continue the fun while isolating, like Plonk Golf Ltd who are offering at-home golf packages, and our clients' Swingers London, who are hosting weekly cocktail making Happy Hours on Instagram. The emergence of pub quizzes online makes you wonder why they weren't so prevalent before.

Despite the challenges ahead, there are plenty of fun (distanced) activities to take part in and we look forward to unveiling our new crazy golf course designs and concepts in the future.

As things moved on in the world I took a look at minigolf and competitive socialising in the time of coronavirus and social distancing.

I've also been regularly writing about minigolf in the time of coronavirus.

My specialist knowledge and experience in the worlds of minigolf and marketing were recently demonstrated in InterGame's discussion of the opportunities and challenges of operating a mini-golf venue amid the Covid-19 pandemic.

I've been competing in the inaugural Putt18 World Pro League during the pandemic and six of the seven events in the first season have now been completed.

Check out my blog post from week 6 of the Putt18 World Pro League.