A visit to the Crazy Golf course at Haigh Woodland Park in Wigan. 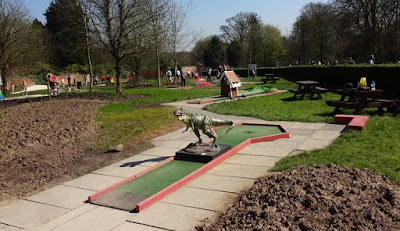 On Saturday 8th April 2017 we headed to Haigh Woodland Park in Wigan to compete in the Great Northern Minigolf Open tournament played out on the two miniature golf courses in the park.


The second course played was the old Crazy Golf layout operated by the Friends of Haigh Country Park group.

At just £1 per game the course was the lowest price we'd ever found for an 18-hole course on our travels. Amazing value for money. We still haven't anywhere charging less than a quid.


The 18-holes are a real hotch potch as the courses has been added to and refurbished by different people and groups over the years. It certainly made for a fun and challenging round.

It was also nice to see a Humpty on the course. 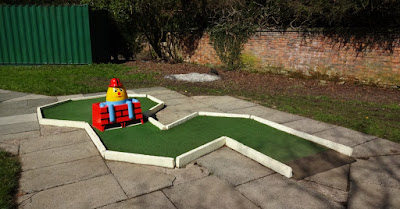 The Haigh Woodland Park Crazy Golf course was the 728th visited on our Crazy World of Minigolf Tour and the 701st in the UK. It became the 428th played on our travels since September 2006.

We've now been to 948 courses overall.

I'd first visited the Country Park back in December 2012 when the course was partially derelict.
Posted by Richard Gottfried at Thursday, April 09, 2020