The second of the two remaining minigolf courses in Felixstowe, Suffolk left to play was at Mannings Amusements, where there is a 13-hole Magical Golf FX Indoor Adventure Golf Course.

In our Irregular Mini Golf Tour Match Ipswich's Bethany Harper picked up the victory with a score of 42, one-shot ahead of Rob Harper, and three-shots clear of me and Emily! A very well deserved victory indeed.

The course was originally the 5th we ever played on the Crazy World of Minigolf Tour! 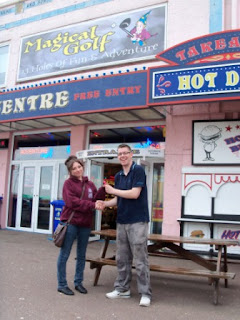