During the practice days for the inaugural WMF World Adventure Golf Masters tournament in Hastings I got to meet the Kosovan National Minigolf Team, comprised of Lavdim Zylfiu and Arben Alija, at the course. The tournament was the first International minigolf event for the players, and indeed Kosovo.

Over the two tournament days I was grouped with Arben, who scored a very impressive and course record breaking round of 27(-9) in his fourth round of the tournament.

However, prior to the tournament proper teeing-off, me and fellow Great Britain International Minigolfer Alan 'Stormin' Norman challenged the Kosovan Duo to an 18-hole Doubles Strokeplay International Friendly on the new Pirate Adventure Golf Course. The challenge was accepted.

I'm looking forward to a minigolf rematch with them in the future! 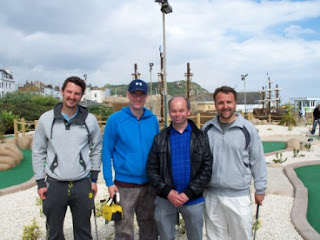 The Kosovan Team play their Minigolf at the Pro Mini Golf course at Prishtina Golf.
Posted by Richard Gottfried at Tuesday, May 17, 2011