16th May 2011
Press Information
For Immediate Release
Gottfried’s play in the WMF World Adventure Golf Masters International Minigolf Tournament in Hastings
Luton Minigolfers and Great Britain Internationals Richard and Emily Gottfried received their second Caps for GB at the first-ever World Minigolf Sport Federation tournament played in the UK. The WMF World Adventure Golf Masters took place at the brand new Pirate-themed Adventure Golf course in Hastings, East Sussex on Friday the 13th and Saturday 14th May.
In the two-day competition Richard made the cut to qualify for the super-final and eventually finished 18th in the 30 player field, which comprised competitors from six nations including Great Britain, Germany, Austria, Finland, Sweden and Kosovo.
Richard scored rounds of 34, 33, 34, 34, 29, 33 and 37 to finish on an eighteen under par total of 234 across the seven rounds. 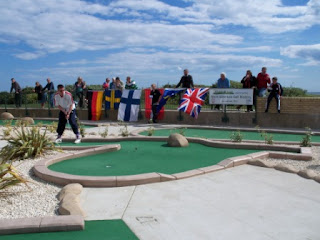 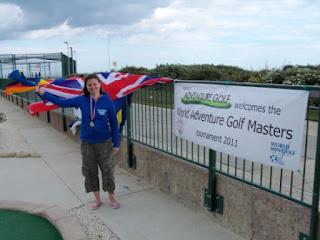 Both players scored 22 holes-in-one during the six rounds of play, with Richard adding a further two to his tally in the super-final.
Emily said “I am over the moon to be the WMF World Adventure Golf Masters Women’s Champion! It was a great competition and I had six really satisfying rounds, but scoring a 32 in the fourth round was my highlight. I played really well, scoring 22 aces over the six rounds, and enjoyed the entire tournament, the course, Hastings itself and the weather, which were all perfect.”
Richard said “To make the cut and compete in the finals of any tournament is great, but to make it to the final of a WMF World Championship is brilliant. The WMF World Adventure Golf Masters was a great event, with an excellent field of players competing on a top Adventure Golf course.”
Germany’s Martin Stoeckle won the overall tournament with a score of 207(-45).
Richard and Emily are also in the GB Minigolf Team for the WMF Nations Cup in Stockholm, Sweden that will take place in June.
In the latest World Minigolf Sport Federation (WMF) Rankings Great Britain has moved up from 24th position of 30 Nations, to be ranked 20th of 31 Countries in the WMF World Rankings. The top three places are taken by Sweden, Germany and Switzerland.
The Great Britain Team sponsor is UrbanCrazy http://www.urbancrazy.com/, an innovative and exciting company that designs and builds permanent and portable crazy golf, mini golf and adventure golf courses. UrbanCrazy has sponsored the Great Britain team in a number of International minigolf tournaments since 2007.
Ends
Posted by Richard Gottfried at Monday, May 16, 2011

Well done both of you.

Many thanks 'The Machine'.

A great weekend spent with GBC ;-)

An excellent weekend all round... thanks everyone :) My "win" was the icing on the cake..

Well played all. A fun long weekend and perfect preparation for my first British major. Fingers crossed, Nick does not get Buttons in prior to the BC's or I am sc***ed