Emily was making her debut in a GMGC tournament and in the eight player field finished in fourth place with a score of 77 with the handicapped scoring system. In the unhandicapped ranks Emily was seventh. 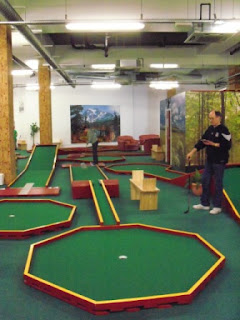 In the two-round GMGC tournament Richard Gottfried recorded scores of 47(+11) and 46(+10) for a total of 93(+22), 81 with his +6 GMGC Handicap, and finished in tied sixth place with Hither Green’s Danyal Andrews in the handicap event, and fifth in the unhandicapped ranks.
Cambridge’s Adam Kelly won the competition, with his father Tony Kelly runner-up and Hither Green’s Nick Sandqvist in third place. 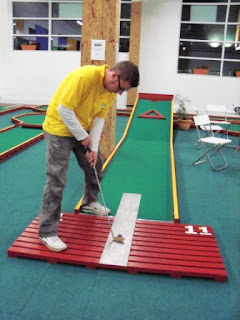 The GMGC are based at the Green Indoor Mini Golf course in Hither Green, Lewisham, London, and the course is well worth a visit. The Course/Club now have a presence on Facebook and you can check out the Club and Course website at http://www.thegreenminigolf.co.uk/