While in Letchworth Garden City on Friday 30th of August I walked through the Garden Square Shopping Centre and noticed some red flags in the distance and was surprised and excited to see they were part of a Minigolf course set-up as part of the shopping centre’s ‘Letchworth Beside The Seaside’ event!

The 9-hole Swedish Felt type of Mini Golf had been in Letchworth for the week and would be closing at 5pm on the very day I happened to be there!

A round of Crazy Golf was a reasonable £2.50 to play so I headed out for a round with the gaze of the shoppers on me as I attempted to have a good round on the tough type of Miniature Golf course.

The layout was of the smaller, more portable type of Swedish Felt but still had some very tough obstacles and fiendishly small holes to putt into.

I started with some OK twos, but hit a four at the third. However I recovered and hit a nice ace on the seventh to a ripple of applause from some of the shoppers enjoying the lovely sunny day and taking a break on the benches near the course. I also aced the ninth to score a total of 20(+2).

The course was well laid out, with a nice consistent playing surface and with felt in very good condition. It was well worth a play and with a second round played on the same day half price it’s worth challenging yourself to beat your previous score. I tried, but failed to best my 20 and even though I started well with an ace on the first (a loop-di-loop obstacle – a nemesis of mine) I could only manage a 20 again, as I hit a three on the last.

I’m looking forward to playing the Mini Golf and Games course in future and it’ll be nice to have a challenge match against Emily on it.

The course was the 321st played on the Crazy World of Minigolf Tour since September 2006 and the 536th visited overall. Interestingly the 535th course visited was also a Swedish Felt variety and the last new course played was also fairly close to home as it was in Bedford.

Back on the 29th September 2007 I played a Putting Green course in Letchworth Garden City – it was the 38th course played on the Crazy World of Minigolf Tour – unfortunately it’s no longer there.

The staff are very knowledgeable and the great thing is, the Gluten Free options are served every day! 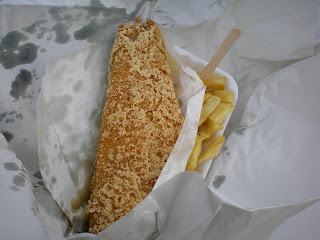 Can't wait for my next visit.
Posted by Richard Gottfried at Tuesday, April 20, 2010 No comments:

A Putting Green from 1943 in Letchworth Garden City

Speaking to my barber yesterday he told me that there is a Putting Green in Howard Park in Letchworth Garden City! It's not a million miles away from Luton, and we've played a course there on the Crazy World of Minigolf Tour before - back in September 2007 at the Par 3 Golf Centre, where there used to be a Putting Course.

According to the Friends of Howard Park & Gardens, the plans for the 18-hole Putting Green were approved in 1943!

While we haven't yet found/or played this 'new' Putting Course in Letchworth, we have driven around the UK's first roundabout in the Garden City.

I'll be heading over to Letchworth in the future to get some snaps and hopefully have a round as part of the Crazy World of Minigolf Tour!
Posted by Richard Gottfried at Sunday, November 21, 2010 No comments:


It's wonderful to see miniature golf courses popping up in different places. Minigolf courses are becoming a fixture on the high street and at out-of-town shopping malls where customers are looking to be entertained while they shop.


Minigolf is becoming more and more popular and has grown from being a traditional outdoor seaside summer activity to become a year-round game that can be played indoors, outdoors and at pretty much any time of the day.


On Saturday we made a short trip up the road to the Walkden Town Centre shopping mall in Worsley, Salford, Greater Manchester to have a game on the pop-up Crazy Golf course there.


The 9-hole Crazy Golf layout was set-up for three days as part of the shopping centre's Summer of Fun events.

We got there nice and early and had a clear course ahead of us.


After our game we had a wander round the shopping centre as we hadn't been there before. As we walked past the course a few more times it was nice to see lots of people enjoying a game and were glad we got there early.

The course at Walkden Town Centre was the 924th visited on our Crazy World of Minigolf Tour and the 526th played.

When our travels began back in September 2006 there were just two permanent indoor minigolf venues among the 600 courses in the UK. One of those was in Felixstowe and the other in Great Yarmouth. There are now close to 100 indoor venues, with more opening up every week.


More Junkyard Golf venues have opened, with courses at the Westgate Shopping Centre in Oxford and at The Light in Leeds. There is also a Junkyard Golf course at the Liverpool ONE shopping, leisure and entertainment complex.


The new Angry Birds Adventure Golf course at the intu Metrocentre in Gateshead is nearing completion and will open this year.

While in Greater Manchester the new Riverside entertainment, leisure and shopping centre in Rochdale will be home to an indoor minigolf venue called Puttstars when it opens in April next year.

One of the first indoor Adventure Golf courses to open at a shopping mall was Paradise Island Adventure Golf. Back in 2008 the first of the PIAG venues opened at the Trafford Centre in Manchester. It's now our local course and we've won some tournaments there too.


A new entertainment centre, including an Adventure Golf course, is also being planned for the Market Walk Shopping Centre in Chorley, Lancashire.

Some of the courses we've seen on our travels have been more seasonal pop-up layouts.


In 2013 the Queensgate Shopping Centre in Peterborough hosted a Christmas-themed 9-hole Miniature Golf course from Mini Golf and Games. I'd played the course when it was set-up, without the festive decorations, in Letchworth Garden City that summer.

I also visited the Pirate Mini Golf course when it was set up at the Galleria Shopping Centre in Hatfield.


Having fun activities on offer like minigolf where people of all ages and abilities can take part is a nice way to attract both new and old customers to a shopping centre, and to help them stay at the venue for a little longer too.


If you are interested in installing or building a minigolf course and would like to receive specialist help, Richard Gottfried is able to provide experience, knowledge and support for all aspects of minigolf business, at any stage of the process. Get in touch to find out more.
Posted by Richard Gottfried at Wednesday, September 04, 2019 24 comments:

Driving around the UK's first Roundabout.

While back down south at the weekend we visited Letchworth Garden City. It's home to the UK's first roundabout and I can never resist having a drive round it.

Kevin Beresford, a fellow member of the Dull Men's Club, runs the UK Roundabout Appreciation Society. Check out his website for more info.

Looking for a way to engage with delegates at events, then use minigolf.


We've played a number of portable and pop-up minigolf courses on our Crazy World of Minigolf Tour, many of which were at business events and exhibitions.


Putting courses and obstacles are a popular addition to stands at trade shows and exhibitions. Way back in May 2007 I played an UrbanCrazy minigolf hole at the International Direct Marketing Fair at Earl's Court.


As a marketer I'm all for innovation. Over the years I've seen the good, the bad and the ugly of events.


Crazy Golf is experiencing a boom and gaining popularity as a business tool. UrbanCrazy's range of minigolf games and course layouts have been going strong for well over a decade. Putterfingers also offer Crazy Golf layouts for a number of different business and leisure events. While the team at HM Adventure Golf have a modular minigolf course layout that is being used for events and temporary courses.


Putting a Putter in the hands of a delegate at an event is a great way to keep them on your stand, break the ice, have a chat and generate some friendly competition.

Minigolf courses have also been hired by a number of venues to increase footfall. Among these are shops, shopping centres, retail parks, schools, colleges, universities, office developments and even a brewery!


The beauty of minigolf is that it's such a fun and easy, pick up and play game.

There are a number of suppliers of portable minigolf course and I've listed those whose courses I've played on below:

Below is a selection of photos showing the portable minigolf courses we've played at events over the years.


If you enjoy minigolf and marketing crossovers you'll like my ebook too - check out The Minigolfer's Guide to Marketing on Amazon.

If you'd like to know more about my marketing work and how I can help you and your business please do get in touch via my website.

To date we've visited 859 minigolf courses. You can view them on our Crazy World of Minigolf Tour list.

Christmas-themed Minigolf course at the Queensgate Shopping Centre in Peterborough for the festive season.

Yesterday I heard that the Mini Golf and Games 9-hole Miniature Golf course has been set-up in the Queensgate Shopping Centre in Peterborough, Cambridgeshire.

I played the course towards the end of the summer when it was set-up in Letchworth Garden City, Hertfordshire. It’s a very good layout and operated by the friendly team at Mini Golf and Games. Check out the links below for further details.

Posted by Richard Gottfried at Tuesday, December 10, 2013 No comments:

Seven Years on our Crazy World of Minigolf Tour!

Today marks the seventh anniversary of our Miniature Golfing odyssey!

It was on Saturday 30th of September 2006 that Emily and I visited the Treasure Island Adventure Golf course in Portsmouth while visiting my brother Christopher in the town.

Since that day we’ve visited a total of 536 courses and played 321 of them.

We’ve also found many unplayable and derelict courses on our travels. These unloved and forgotten courses once again being looked upon by enthusiastic eyes.

In the last year we’ve managed to play at fifteen new courses, revisit a number of courses and visit a further twelve courses we couldn’t play for one reason or another.

Who knows how many more Minigolf courses we’ll play in the coming weeks, months and years. There are some courses in London and St Albans that are on our ‘to play very soon’ list, while other courses in the south west of England (where there are many!) will take some time to explore properly.

Whatever happens we’ll continue to tour the country and the great British coastline, popping into seaside resorts in the hope of playing a new and exciting course, or rediscovering a long-forgotten remnant of Minigolf history.

If you know of any new Minigolf courses then do let us know through a comment below, or via Twitter.

Many thanks to everyone who has tipped us off about a course we hadn't yet played or didn't know about, it's very much appreciated.

We've met some great friends and interesting people on our travels for fun and on the domestic and international Miniature Golf competition circuit. Thank you to each and every one of them.

Please do also check out the links below (and on the right hand side of the blog) for other Minigolf enthusiast websites and sites of interest!