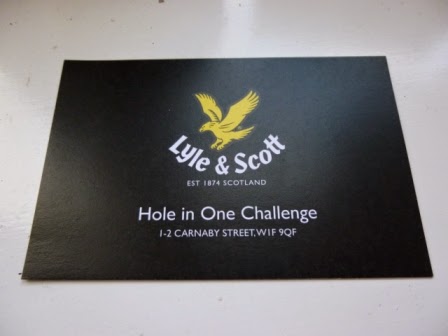 All this week the clothing brand Lyle & Scott has had a special Hole-in-One Minigolf Challenge set up at the flagship store on Carnaby Street. The layout has been supplied by Urban Crazy.

On my lunch-break yesterday I popped along with fellow Minigolfer Gareth 'Osmosis' Holmes and my old Dodgeball rival 'Rowdy' Russell Fenner as we tried our luck on the tricky challenge that had been set-up as a promotion for The Masters golf tournament.

Adam from Urban Crazy was on-hand at the hole to instruct players about the challenge and we saw him knock in a couple of good holes-in-one.

Each player was given three attempts to register a hole-in-one and win a prize. Both winners and losers could make use of a discount on the day too for purchases in-store.

Unfortunately none of us managed to score an Ace - and we won't be sporting a Lyle & Scott polo shirt this weekend. We did see a couple of other players manage the feat though, to a ripple of applause from the crowds in the bustling street.

You can still play the special Hole-in-One Challenge hole this week. Follow Lyle & Scott and the Lyle & Scott Golf Team for more info.

Back in October 2012 Lyle and Scott and The Campaign for Wool created a special Woolly Golf course in Covent Garden for that years Wool Week. That course became the 511th visited and 307th played on the Crazy World of Minigolf Tour since 2006.