While in London recently we walked passed the 9-hole Crazy Golf course in Clarence Way, London and for the first time on any visit to the course we saw people actually playing Crazy Golf on it!

We had a chat with the group who were playing a fancy dress minigolf tournament (which involved drinking too). Each players Putter had to be related to what they were dressed as, for example one player was dressed as a Baseball Player so used a Baseball Bat, another was a Janitor and was playing with a Broom, and another man was dressed as a Granny so used a Crutch to play with!

An interesting way to spend a Saturday and certainly one of the craziest minigolf competitions I've ever witnessed. 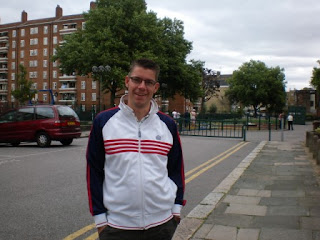 The Crazy Golf Course Of Camden Town - article at Londonist