Blog post about spectating at a Cycle Speedway in Edinburgh - The British Veterans over 50s and over 60s Individual Championships in August 2011.

On Saturday 20th August 2011 we flew to Edinburgh for a nice weekend away. We’d managed to get the flights on easyJet incredibly cheap via a very good use of our Nectar Points and with us being on the first flight of the day we arrived in the city centre at 8.30am.

Ahead of the trip we’d spoken to our friend, Midlands Minigolf Club team mate and minigolf rival John Moore who told us he was also going to be up in Edinburgh on the Saturday and that he was heading to a great sporting event – Cycle Speedway!

Ever on the lookout for new and unusual sports to take part in, or spectate at, we met up with John and headed to Edinburgh’s Redbraes Park (home of the Edinburgh Falcons Club) and the British over 50s and over 60s Individual Championships of Cycle Speedway! 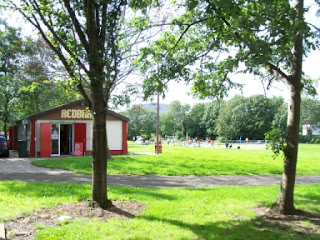 With ‘Tapes-up’ at 2pm we arrived in time to see the introduction of the riders who would be competing in the first event of the afternoon, the over 60s Individual British Championships. 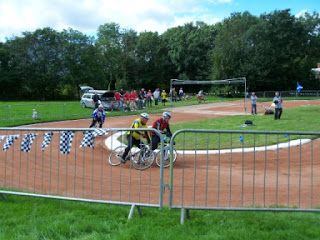 According to the Edinburgh Falcons Cycle Speedway Club website the sport of Cycle Speedway came into being in the late 1940’s and grew out of Motorbike Speedway. Races take place on oval tracks 60-90m long and racers ride around the circuit in an anti-clockwise direction. In each race four riders race each other over four laps with the winner picking up four points, runner-up three, third-place two and fourth place picks up one point. 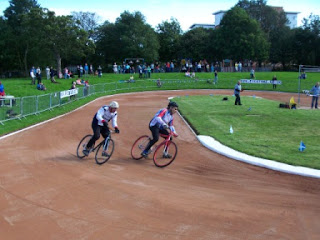 There was some great strategy in use in the races with riders battling to get the best of the track positioning and a few restarts due to some physical contact between riders. We saw a couple of crashes too. The event was great fun and free to attend! There were programmes for sale as well as T-shirts, along with refreshments. If you’ve never been to a Cycle Speedway event (and I’m guessing a lot of readers haven’t) it’s well worth a watch.

Photos from the over 50s competition

Photos from the over 60s competition - with us here and here 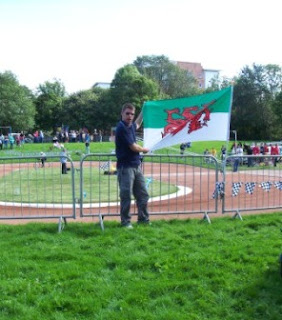 During the interval between the over 60s and over 50s events we went to a nearby pub for a quick drink and then on to St Mark’s Park and the Powderhall Bowling Club, which uses one of its three Bowling Greens as a 9-hole Putting Course! This would become the 266th Miniature Golf course played on our Crazy World of Minigolf Tour!