Luton Minigolfers Richard and Emily Gottfried were in action over the weekend as they competed in two competitions at the 12-hole Minigolf Course at the Four Ashes Golf Centre in Dorridge, Solihull.

First up was the Midlands Open competition on Saturday 30th July, with Emily finishing in seventh place in the 25 strong field with a score of 95(-1). Emily had been in tied second place with British Number One Michael Smith heading into the last round, and with her strong performance in the event placed higher than Richard Gottfried for the first time in a BMGA Tour event. Richard carded a four-round total of 96(par) to finish one-shot behind in tied eighth place with London's Nick Sandqvist. 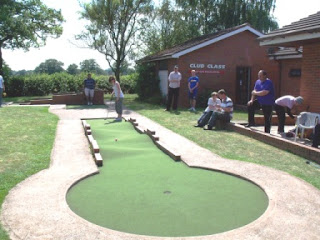 Photo: Emily plays the 12th hole in the final round

Emily said “The Midlands Open was a fantastic tournament for me. I played particularly well in the first three rounds, so I was very pleased to be playing in the leading group going out into the fourth and final round. Unfortunately it was an average round for me, which came just when other player seemed to be reaching their peak, so I dropped down the leader board. I still enjoyed the tournament greatly and it was nice to play the final round with such good players as Chris Harding and Michael Smith.”

The four-round competition was won by the reigning World Crazy Golf Champion, Birmingham’s Chris Harding with a score of 88(-8). Greenhithe’s Sean Homer defeated Canterbury’s Marc Chapman and Lewisham’s James Rutherford in a play-off to take second place after the trio had scored 90(-6).