On Monday 10th of October 2011 I headed to St Georges Square, Luton to take part in the Guinness World Record attempt for the most people to ‘High Five’ simultaneously. The event was held to mark World Mental Health Day and was organised by the Make A Difference (MAD) group. 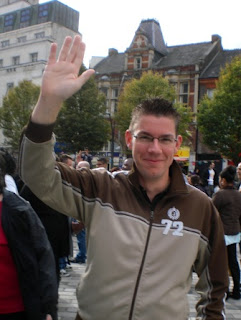 A story was written in last week’s Herald & Post newspaper (page 21)  and unfortunately for me, just as the photo used was being taken I was in a ‘preparation’ stage of giving a High Five (we had a few dummy runs), so it looks as though I’m doing a Fonz impression!?