Richard runner-up in Individual Competition and winner, with Chris Harding, in Team Tournament

Luton Minigolfers Richard and Emily Gottfried were in action at the fourth-annual Weymouth Open competition at the 18-hole Pirate Adventure Golf course at the Sea Life Centre at Lodmoor Country Park on Sunday 9th October. Competing in a 13 player field Richard was the runner-up in the Weymouth Open individual tournament. Emily finished in tied-eighth place. 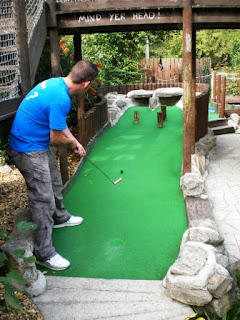 In the second competition of the day Richard teamed with Birmingham’s Chris Harding to compete in the first-ever Weymouth Open Team Tournament. In the combined score doubles event the pair won with a total of 80(+8) with both players hitting rounds of 40. Emily and her partner Chris Smith were runners-up with a team score of 82, with Emily scoring 42 and Chris Smith a 40. 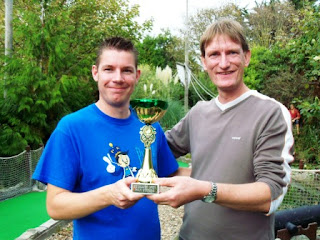 Richard said “The Pirate Adventure Golf course in Weymouth is one of the hardest courses we play on the BMGA Tour but I always enjoy the challenge it presents. I’ve now been runner-up up here twice, as well as winning the event in 2008. I’m very pleased to have added the Weymouth Open Team Championship title to my honours and Chris Harding was a great partner to have in the event.”

Emily said “The doubles competition was great fun. Chris Smith was a good partner to have and we put up a good fight for the Team Title. I felt I played a little under-par, and so let the team down, as we were only two shots away from a play-off for the trophy, and I made a couple of silly putting errors. Hopefully the title will be ours next year!”