On Saturday 15th October 2011 we were in Hastings practicing for the following days Planet Hastings Crazy Golf Club Open tournament and decided to take a break to spectate at the 59th Annual National Town Criers Championships that was taking place in the town's Queens Square.

The event saw Town Criers from all over the UK competing to be crowned the National Champion and entrants were judged on 'volume, diction, clarity and inflection'.

The event was MC'd by Hastings' Town Crier Jon Bartholomew and as well as keeping the event rolling, he also let the audience know about the Hastings Beer and Battle Cider available from Hastings Brewery - which I have since found out is planning to launch a Gluten Free Beer soon! 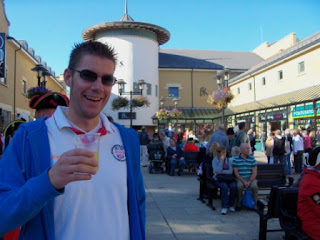 Photo: Richard enjoys a Battle Cider while listening to the Town Criers Championships in Hastings

Link - The Ancient and Honourable Guild of Town Criers
Posted by Richard Gottfried at Thursday, October 27, 2011

Surprise me, which one was new to you?

Knowing the word 'stood' will stand you in good stead.

The overall winner this year was the reigning and defedning champion - Skipton, Yorkshire's Kevin Griffiths.

The winner of the 'Best Dressed Town Crier' was Nailsworth, Gloucestershire's Anthony Evans.

Photo - Squire The Town Crier calling one, calling all to the 2011 £2 Tat Challenge in Hastings!

Video of the National Town Criers Championship 2011 from Hot Under The Collar.

You can see me and Emily in the background drinking our Battle Cider at 1min 25secs in!

The 60th National Town Criers Championship will once again be taking place in Hastings, East Sussex and in 2012 will be held on Saturday 13th October between 11am and 5pm.

More details can be found on the 1066 Country website here.

According to the news report the winner of the contest was the Town Crier of Lichfield.

Over on the excellent Abingdon Blog last month I noticed that my old home town of Abingdon-on-Thames has a few different Town Criers and its own Guild of Town Criers!

More information about Town Criers can be found at The Ancient and Honourable Guild of Town Criers website.