23 players competed in the event, with Emily finishing in tied sixth place with fellow Great Britain International, Scotland’s Freddie Blackburn-Shaw, after both players scored 112. Richard finished four shots back in tied 10th place alongside 2008 PHCGC Open Champion Trevor Exall and Richard Stevenson. The tournament was won by Oxford’s Michael Smith with a score of 98. 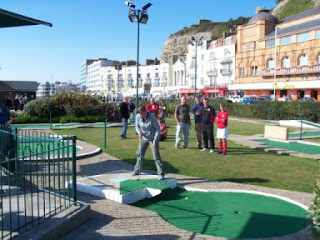 Photo: Emily plays the 16th hole of the Crazy Golf course in Hastings

Following the tournament Emily said “This was a great tournament. Playing on three courses in one go is a challenge, as all three are so different, but that does even out the field, because no-one player is the best on all three courses. So I was really pleased with how well I played and very happy with 6th place. It was also really good fun as the courses and the people of Hastings are always a pleasure.” 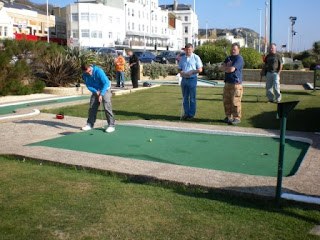 Photo: Richard plays the 4th hole of the Crazy Golf course in Hastings

Richard said “I had a nightmare round on the Adventure Golf course and couldn’t buy a hole-in-one on the Pirate course. My round of 34 on the Crazy Golf course wasn’t too bad and was good preparation for the upcoming World Crazy Golf Championships, let’s hope the weather then is as good as it was for the Planet Hastings Open.”