The 54-hole Doubles Match-up saw play begin on the Crazy Golf Course with Michael scoring a 33 and Richard a 34 for a combined score of 67. Emily and James could only manage scores of 42 and 35 for a combined 77.

Play then moved onto the Pirate Adventure Golf course, the newest of the three Sea Front courses in Hastings, and saw Michael hit a 31 and Richard a 37 for a 68 total. Emily scored a 40 and James a 34 for a team score of 74.

With the CMGC trailing the OMGC by 16 shots the deciding round was played on the Adventure Golf course, a course where 16 shots could be made up.

That wasn't to be the case though as Michael scored a great 37, with Richard scoring 42 for a combined 79. Emily also scored 42 but with James scoring 48 for a combined round of 90 the overall victory was to go Oxfordshire's way with a total of 214 to the CMGC's 241.
Photos: Emily and James of the CMGC see their chances of a win against the OMGC go up in smoke as they play into the mist on the Hastings Adventure Golf course 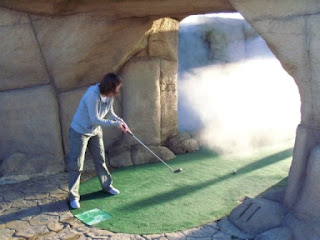 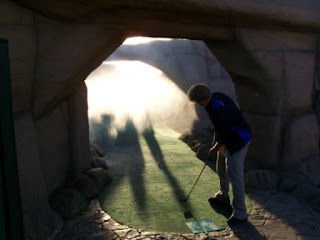