The Make A Difference (MAD) group is organising a Guinness World Record Attempt for "The most people to successfully High 5 across multiple locations" on Monday 10th October 2011 - World Mental Health Day.

The Make A Difference group aims to promote mental wellbeing across the community and challenge the stigma that exists towards mental illness.

The Guinness World Record Attempt for the most High 5s will be taking place in Luton and Bedford (as well as ten other community sites in the two towns) at 1pm on Monday 10th October. Anyone can take part and the current record stands at 1,790 people. Further details can be see on the poster below and on the MAD website. 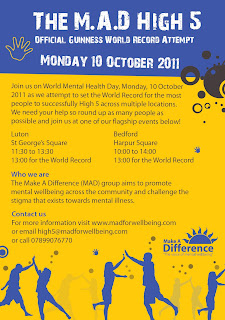