My Entry for the Putter King Miniature Golf Scavenger Hunt 2011

On the 26th of August 2011 the Putter King Minigolf Company in Japan announced the first-ever Putter King Miniature Golf Scavenger Hunt. The contest, which closes on the 1st of November 2011, has been taking place on Miniature Golf courses worldwide and people were invited to track down and record items and achievements related to all forms of Minigolf.

Details of the tasks, and links to photos and videos of the activities I have completed are below.

2) Picture of yourself next to each obstacle in our list of the Top 10 Nostalgic Miniature Golf Obstacles. (120 points; 20 bonus points for each obstacle that exactly matches the one pictured in the article)
Obstacle 1 - The Windmill
Obstacle 2 - The Loop a.k.a “The Loop de Loop”
Obstacle 3 - The 19th Hole a.k.a “The Free Game Shot” (#2)
Obstacle 4 - The Barn
Obstacle 5 - The Toboggan Trap Obstacle a.k.a “The Ball Return Trap" (#2)
Obstacle 6 - The Trestle Bridge Obstacle
Obstacle 7 - The Hanging Bowling Pins
Obstacle 8 - The Lighthouse
Obstacle 9 - The Traffic Light (#2, 3, 4)
Obstacle 10 - The Cannon

3) Build your own full-size miniature golf hole. (75 points; up to 100 bonus points available depending on the craftsmanship, playability, creativity and fun factor of your hole)
- On the 24th and 25th October I built "PK Island" - a full-size minigolf hole with a plateau and ramp obstacle. Photos - 1, 2, 3, 4. Videos - 1, 2 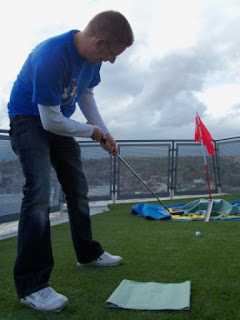 4) Video of yourself making a hole-in-one on two consecutive miniature golf holes. The video must be one continuous shot with no editing. (60 points)
- I managed to score two Aces in a row during a round of Minigolf on the 9-hole course at Tea Green Golf Club on Tuesday 27th September 2011

5) Picture of yourself with the Putter King mascot. (50 points; 15 bonus points if you are wearing a Putter King t-shirt)

6) Picture of yourself with the completed Putter King wobblehead. (15 points; 15 bonus points if the picture is taken at a miniature golf course)
- Photos of me with Wobblehead; the Wobblehead on Table Top Minigolf Course; making the Wobblehead on the 3rd October; and a video of the Wobblehead wobbling (a bit)

7) Picture of a completed scorecard from a round of miniature golf. The round of golf must have taken place after the start of this scavenger hunt. (10 points)
- From The Swingers Club Miniature Golf Course in Las Vegas, Nevada, USA on the 8th September 2011 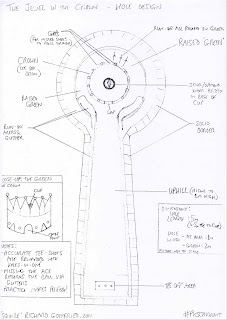 10) Screenshot from the Putter King app showing a 9-hole score below par. (10 points)
- Did not complete

11) Screenshot from the Putter King app showing that you have successfully unlocked all of the holes in the game. (45 points)
- Did not complete

15) Picture of yourself with a famous golfer or miniature golfer. (15 points; 150 bonus points if the golfer is on the PGA tour AND you are wearing a Putter King t-shirt in the picture)
- Me and two-time World Crazy Golf Champion Chris Harding at Weymouth Adventure Golf on Sunday 10th October 2011

16) Video of yourself making a hole-in-one on a miniature golf hole with a loop-de-loop obstacle. (30 points)
- Filmed on Hole 18 at Hastings Sea Front Adventure Golf course on Thursday 27th October 2011

17) Video of yourself successfully making a trick miniature golf shot. (40 points; up to 100 bonus points available depending on the difficulty and complexity of the trick shot)
- For this task I made a Blindfolded Hole-in-One shot!

My main two rivals in the international chase for the Putter King Miniature Golf Scavenger Hunt Trophy are Pat Sheridan of The Putting Penguin Minigolf Team (USA) and Allan Cox of the Ermington Putters Club (AUS).

Many thanks to my PKSCAVHUNT helper Emily 'Lemony' Gottfried for her help in photographing my endeavours on the 2011 Putter King Miniature Golf Scavenger Hunt.