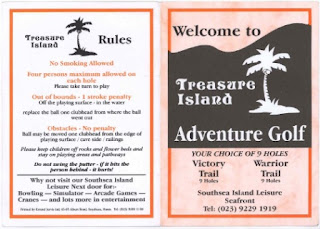 On Friday 30th September 2011 Emily and I headed down to Southsea, Hampshire to celebrate the five-year anniversary of the start of our Crazy World of Minigolf Tour. We were joined by my brother Christopher who was also there at the start of our tour of the UK’s Miniature Golf courses, when we played our Irregular Mini Golf Tour competition on the 9-hole Victory Trail course at Treasure Island Adventure Golf on the seafront in Southsea. 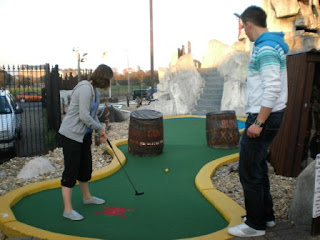 Photo: Emily tees-off on hole 1 of the Victory Trail course as Christopher looks on

Back on Saturday 30th September 2006 a group of us headed to the Treasure Island Adventure Golf course during a weekend away visiting Christopher on one of our seaside trips (Emily and I had made a resolution to visit as many seasides as possible). We played the Victory Trail first, followed by the 9-hole Warrior Trail course on the Sunday. 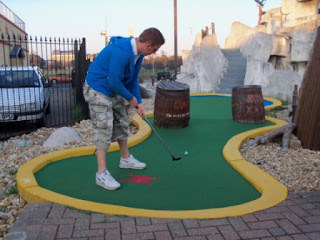 From there our Crazy World of Minigolf Tour has seen us travel all over the UK and to several other countries too. Following our trip to Southsea’s Treasure Island, a replay of two other courses on Southsea Common, and a roadtrip along the coast to Bognor Regis and Felpham the Crazy World of Minigolf Tour courses played count now stands at 276, with visits made to 430 courses overall.

In our Irregular Mini Golf Tour re-match on the Victory Trail course Emily took the win with a score of 24, followed by me with a score of 25 and Christopher one-shot off with 26. In a nod to nostalgia we played the game under Crazy Golf Rules, as when we first played in 2006 we used very different rules to those we generally use now. Back in 2006 I had scored 31, Emily had hit a 34 and Christopher had managed a 36. 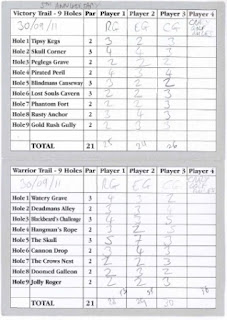 Photo: The Scorecard from our revisit to the two Adventure Golf courses at Treasure Island

After the round we then stepped up to try our luck on the lucky last hole and try to Fire the Cannon to win a FREE GAME. I had managed this feat in 2006 and once again I hit a hole-in-one to earn a FREE GAME pass! Something I very rarely manage despite how often we play minigolf!? 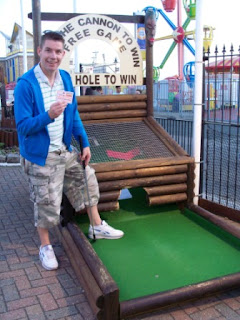 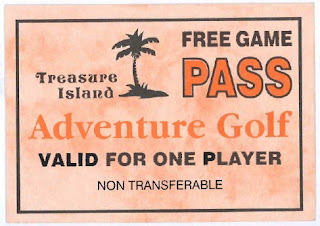 With the FREE GAME pass safely tucked away as a memento of the visit, and a future exhibit in the Crazy Golf Museum, we decided to play the Warrior Trail Adventure Golf course too.

The light was beginning to fade but our enthusiasm for playing did not. This time round I managed a 28, with Emily hitting a 29 and Christopher once again just one-shot back on 30. Before the scores were added up we stepped up to try to Fire the Cannon, however none of us managed a hole-in-one the second time around.

Video: Playing the 4th hole on the Warrior Trail (better than we had done in 2006) 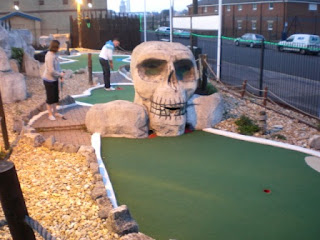 In the overall Crazy World of Minigolf Tour Victory & Warrior Trail 5-Year Anniversary Tournament there was (as in 2006) a tie for first-place. This time it was Emily and me that were joint winners, with Christopher in third spot.

On the 1st October we headed to revisit and replay the other courses in Southsea at the Southsea Common Castle Mini Golf Centre, and the closed course on Southsea Pier. We also played a new Adventure Golf course at Stokes Bay in Gosport. On Sunday 2nd October we then headed along the coast towards Bognor Regis, west Sussex, where we managed to play a further seven courses in Earnley, Selsey, Hunston, Bognor itself and Felpham (next to Bognor).

We had also planned to visit Littlehampton and play the many Miniature Golf courses there, however we ran out of time which means that they will become some of the first we’ll play when they reopen in 2012 after the winter break. 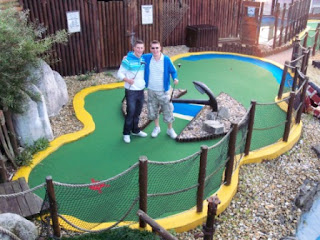 Photo: Christopher & Richard on hole 8 of the Victory Trail course 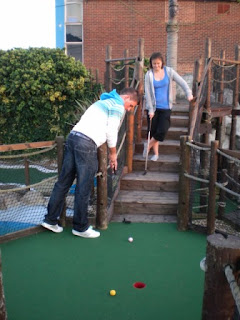 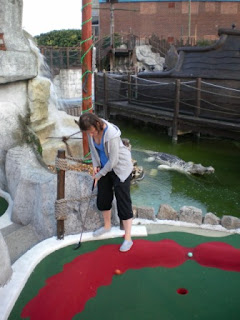 Photo: Emily plays hole 1 of the Warrior Trail course as a Crocodile (or Alligator) looks on 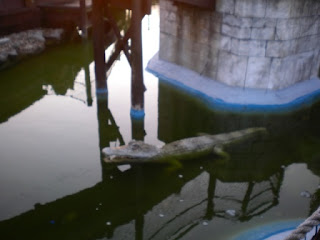 Photo: One of the two Crocodiles (or Alligators) lurking in the water surrounding the two courses 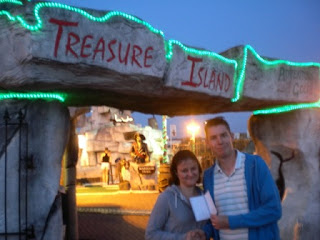 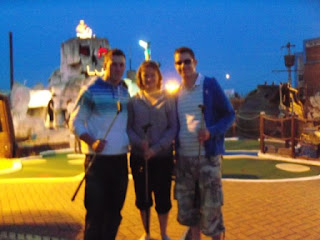 Video Link:
- Who is the real 'Squire' Richard Gottfried