On Saturday 22nd October the 2011 Sportingbet UK Rock Paper Scissors Championships took place at The Knights Templar Pub on Chancery Lane, London. Over 200 people took part in the Individual and Team Competitions at the event organised by the team at Wacky Nation, with 128 players battling to become the 2011 UK RPS Champion. For the third year running the winner came from Woking! With the 2011 honours going to Max Deeley. 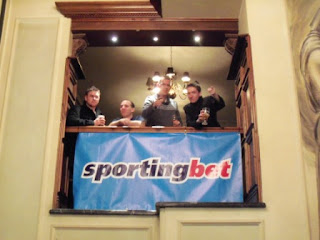 Our group of six players had a mixed bag of results in the individual competition, with Oliver 'The Machine' Florence doing the best of the bunch and reaching the Semi-Finals, having had to face-off against, and defeat, team-mate Emily 'Lemony' Gottfried in the third round. The third round loss for Emily was the same stage she exited the 2010 UK RPS Championships. Of note was the fact that both Ollie and Emily received 'Byes' in the first round of the contest as their opponents were in no condition to perform! 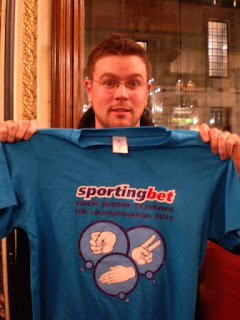 The 2011 tournament used a knockout format rather than the round-robin system employed last year, this meant that players were only guaranteed one match and Brad 'The Fist' Shepherd was the first of our group to fall, losing in the first round. I followed soon after with a straight 2-nil defeat. Brad and I were in good company in our losing efforts, as the 2010 UK RPS Champion - Paul Lewis - also fell at the first hurdle. 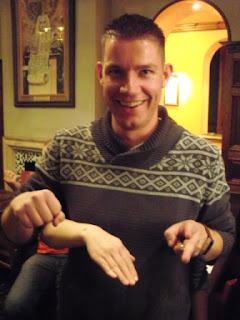 Photo: Richard shows that three hands are not better than two 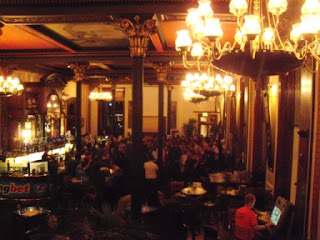 Photo: Brad 'The Fist' Shepherd (bottom right) cuts a lonely figure having crashed out in the first round

Marc 'The Roller' Bazeley was the only member of our troupe to be drawn on the rowdier Table One, but despite nerves on his debut won through round one. However, in round two he was drawn to face a giant of a man who almost dislocated 'The Roller's' shoulder in the opening handshake! This obviously impaired Bazeley who unfortunately lost the match and decided to make the long journey back to Wellingborough, but not before he gave a post-match interview.

In the Team contest 16 teams of four players lined-up to be crowned Champions. Our team - The Guild of Rock Paper Scissors - finished in tied 5th/6th place, alongside longtime Dodgeball rivals the WDW, following a win in the first round, but a loss in the Quarter Finals. The team consisted of myself, Emily, Ollie and Paul 'The Terminator' Jones, who didn't enter the individual event but instead spent his time sharking people in Challenge RPS matches. 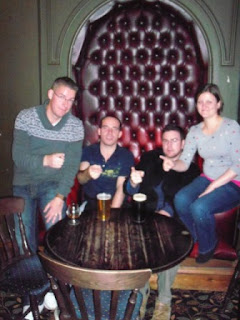 Photo: The Guild of Rock Paper Scissors (GoRPS) in their lair before the team tournament. From l-r 'Squire' Richard Gottfried, Paul 'The Terminator' Jones, Oliver 'The Machine' Florence, Emily 'Lemony' Gottfried - once again note the players throwing the illegal RPS manouvre of 'Sausage'!

Ahead of the tournament the competition sponsor Sportingbet had a betting special running with a number of different markets priced up. Emily and I managed to recoup some of our spending with a win on the winning hand combination. 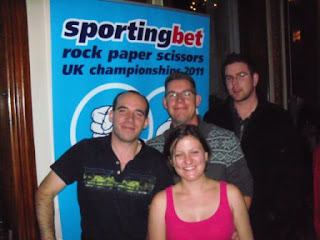 You can view a number of videos from the 2011 (and 2010) UK Rock Paper Scissors Championships on my YouTube Channel.

You can also register your interest to compete in the 2012 UK Rock Paper Scissors Championships on the UK RPS website.

In the BBC News Report of the 2011 UK RPS Championships you can see me, Emily, Brad and a little bit of Ollie's faces looking on from the sidelines!

The Sportingbet UK Rock Paper Scissors Champs will be on Live With Gabby tomorrow at 11.45am.

I wonder if our lot will be seen lurking in the background, or if Oliver 'The Machine' Florence's Semi-Final Bout will get shown?