On Thursday 15th December 2011 me and Marc 'The Roller' Bazeley met up in Milton Keynes for a "Best-of-Three, no wait make it Best-of-Five Games Series" for the title of MK Winter Sporting Challenge Champion! We had planned to play a lot of Quasar Laser Tag at the Tenpin Mega Bowl at MK Leisure Plaza, however there were no spaces in games until 9pm! So with time to spare we headed to the brand new Pirate Island Adventure Golf at the Abbey Hill Golf Centre for a game of Minigolf. 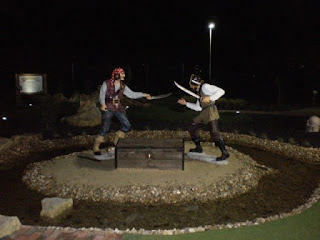 Photo: Not me & Marc having a Pirate Battle on a Minigolf Island!

As I had arrived in MK before Marc, I had managed to get a game in beforehand (making it minigolf course #281 played on the Crazy World of Minigolf Tour!). Not that my warm-up game helped too much in our challenge match. Under floodlight conditions we hit the 18-hole course and it's excellent Pirate-theming for a match played in very cold conditions. 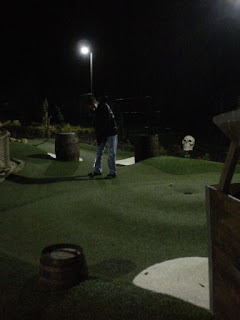 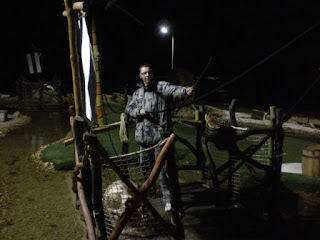 Photo: Richard on a Raft attached to a Minigolf Island

To say the match was one-sided in the early stages would be an understatement as Marc, the BMGA British #89, raced ahead over the Front-9 holes. 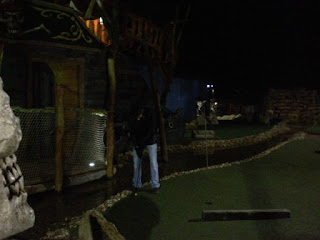 Photo: Marc has a testing second Putt on the 18th hole

But by the 17th hole the match was level on both Strokeplay and Matchplay! I stepped up first and hit a two, Marc played his first shot which ended in the rocks, played his second and waited... and it ran just passed the hole and he had to settle for a very unfortunate three. The final scores - Richard 52, Marc 53.

Following the Minigolf match we decided to head back to the Mega Bowl to have a warm game of Quasar. 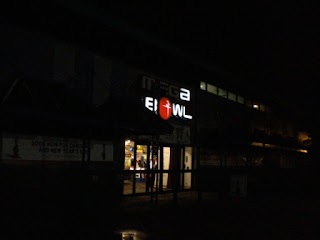 While we were waiting for the 9pm game slot we decided to have a game of the Crazy Golfers Favourite - Air Hockey. Despite leading for most of the (10-minute!) match I lost 8-9 after scoring an own goal in injury time. The game conditions were quite interesting, with just two of us and with no Emily to fetch #TheMan when the Puck went flying off the table there were a lot more throw-ins than usual! 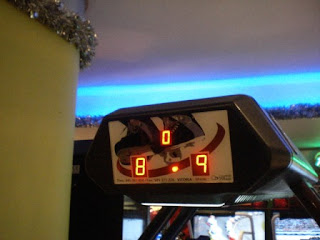 With 9pm approaching we headed to the check-in desk, signed the disclaimer (no running, no swearing, no fighting, no rifle-butts to the face etc.), found out that it would just be a one-on-one match and then waited to be called through to the Briefing Room. While we were waiting to go through Marc had the opportunity to have his photo taken with one of his Minigolf heroes! 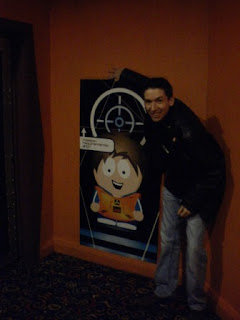 Photo: Marc and his Minigolf Hero

Once in the Briefing Room the man said that before we could play we would have to watch "The DVD"! He seemed quite apologetic that we'd have to sit through it, however Marc and I were quite excited as in all the times we've played Laser Tag we've never had a briefing through a TV/DVD! The video was very informative, told us we were playing "Q-2000" and that once the film was over we'd be led to "The Vesting Room"! 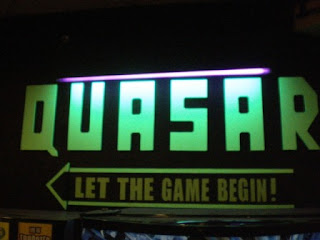 The Milton Keynes Quasar Arena was very maze-like, with narrow passages leading to a central hub. With the game beig a solo battle the bases were unfortunately not in play. The game saw each of us trying to track the other down and in the quite big arena you had to take your opportunities and use the element of surprise on your opponent. Marc managed to do this and scored more hits, ending the game with a win for the REDS. 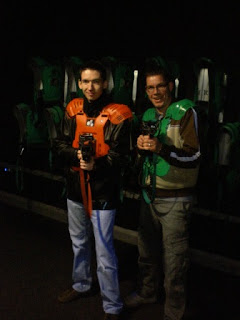 With the series at two-wins-to-one in Marc's favour we headed to the Pool tables. The table we played on seemed to have a bit of a slope and was also a bit troublesome if you were shooting from one end of it, as you had to open the door to the Hurricane Simulator arcade machine to get any sort of leverage!? 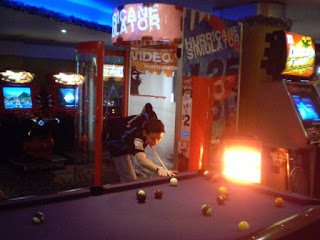 The other Pool table was out of order, but happened to be the one with any chalk in the chained up chalk holder! 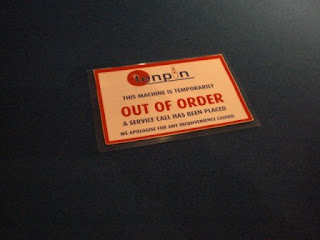 In our match Marc won, with me still having three balls left to pot when Marc nailed the black for victory.

After playing Pool we (I) tried to make the series a best-of-seven event, but Super Mario Kart wouldn't accept any of our coins and someone had jammed a pound coin and a ten pence piece in the coin slot of Out Run 3, putting paid to any chance of another win for me.

Ultimate MK Games Champion Marc 'The Roller' Bazeley said "I knew it was going to be tough, especially after the minigolf. But I always believed in myself and that belief was justified."

Perennial Runner-Up ‘Squire’ Richard Gottfried said “Well done to Marc on his big win at the games. It was well deserved indeed and he was unlucky not to beat me at the Minigolf too! I’m looking forward to some more games of Laser Tag and visits to #TheButtons soon.”

The new Pirate Island Adventure Golf course at Abbey Hill Golf Centre in Two Mile Ash is well worth a visit and we'll be heading back again. Hopefully we'll get to play the Quasar with more people next time too.